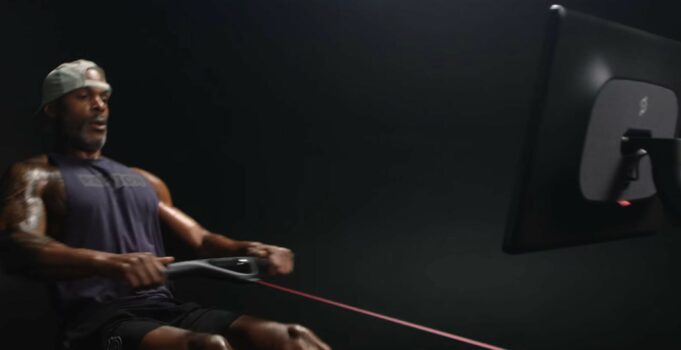 Word is that Peloton is on The Verge of releasing its first rowing machine.

At its annual “Homecoming” user conference, the company teased the upcoming product with a mysterious image… of a handle. In addition a 30-second promo video was shared across Peloton social media accounts briefly showing the rower in action.

And not a moment too soon.

The struggling at-home fitness maker needs something to boot strap its fortunes. Surely, it’s not the kludgy Peloton Guide device released earlier this year without much fanfare. Too much complexity, too many cables.

Yes, I think there’s a market for that. Many have long suggested Peloton would enter that space, after all its in line with its current hardware lineup that currently features a spin bike and treadmill — both having an entry and upper model.

Apparently, Peloton co-founder Tom Cortese said this over Zoom to The Verge:

“We’re entering the rowing category, which is long-awaited and feels like the worst-kept secret on Earth, so might as well just talk about it.”

You can read the entire piece on The Verge, which features more quotes and insights from Peloton itself in addition to some good analysis on what it might take for Peloton to get back on track: Peloton teases new rower at Homecoming event.

Also, as expected, the Peloton marketing machine went into overdrive with several social media posts teasing the upcoming rowing machine such as the one below on Twitter (and also Instagram, Facebook):

I think a rower is a good idea. It leverages the company’s existing capability in manufacturing fitness gear at scale. However, the real value going forward is going to be in the subscription base and the ongoing software possibilities. After all, that’s where the margin is based. Hardware is easily copied. Software not so much.

No word yet on pricing for a Peloton Rower. But if I had to guess I’d go with: $1,899 (USD). That would be place it at the upper end in the premium segment — where Peloton, like Apple, has traditionally positioned its products.

By comparison, here’s where the most notable competition sits:

Of course there’s also no shortage of no-name brands that sell dirt cheap rowers — search Amazon and you’ll find pages of them. The problem there is the content. Just as we’ve seen with smart bikes and treads, it’s the software that hooks buyers and keeps them working out.