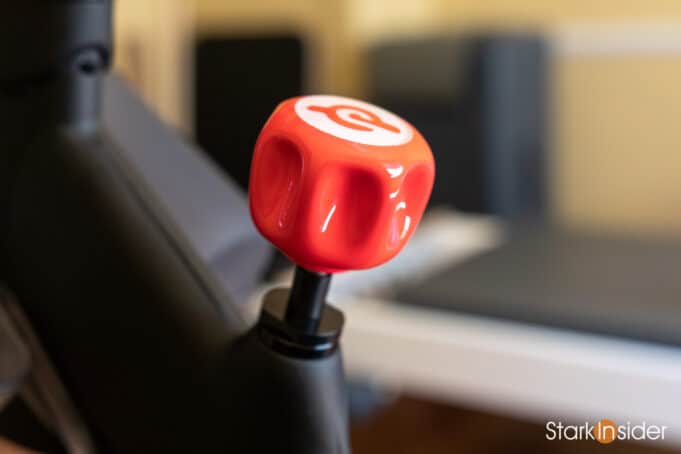 Unlike regular Peloton spin classes there’s no instructor. Instead it’s all about a video game-like experience, with music playing a central role in motivating riders to get their hearts pumping.

I gave Lanebreak a spin and came away suitable impressed. Yes, it’s simple — there’s only three types of challenges, each requiring you to speed up your cadence, or, at times, even slow down. In my 10 minute test I completed 95% of the challenges overall (Beats, Breakers, Streams) and scored 69,380 points over 2.8 miles: 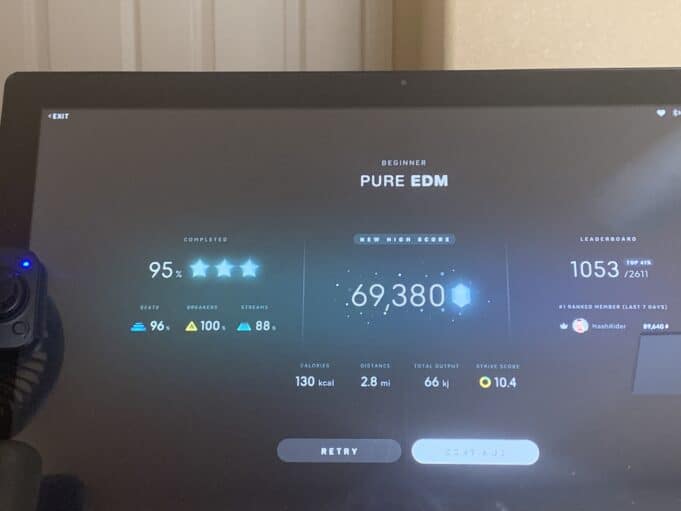 Aesthetically I really like what the Peloton design team has done here. Lanebreak’s got that Tron vibe. Thin neon lines glow in the ether; perhaps reminiscent of the 1980’s and arcade favorite Atari Tempest. It’s definitely got the look and I still believe that the Peloton designer/programming/UX team is among the best around.

Lanebreak is a welcome break from the stream of hype and hustle from the instructors during a class. Sure, I like that stuff. Usually I find it motivates me to no end, or at the very least makes me laugh out loud or smirk with amusement. This is comfortably hard! But hardly comfortable! (I think that’s one of Robin Arzon’s catch phrases?). Sometimes, though, you just want to zone out to some music. I doubt Lanebreak will ever become my “go-to” for Peloton workouts, but as a subscriber I do appreciate new features being downloaded to my bike from time to time. Variety of choice is pretty great.

‘Lanebreak’ as a life hack for Peloton Bike auto resistance

Now here’s an interesting thing. Well, at least I found it semi-interesting.

When you do the Lanebreak tutorial for the first time you’ll likely be tempted to twist that iconic red knob to adjust resistance. You quickly learn the knob in this case has been re-purposed. Instead, you use it to steer across lanes, hitting various targets as required.

And… the bike itself automatically adjusts resistance. During the game I found myself thinking, “Wait a sec, I’m not touching resistance, and, yet, it’s changing… without my input.”

Because one of the main selling points (a tricky one at that in my estimation) is that the up-level Bike+ comes with auto resistance. Yet, with Lanebreak at least, here’s the standard Bike adjusting resistance for us automatically — as we solely focus on steering and cadence to complete challenges.

True, the “auto resistance” here is not exactly the same as the one found on the Bike+. That model will enable the resistance to be adjusted automatically during regular, instructor-led classes. It’s the only way to get that feature. If you want that you’ll still want the Bike+.

Nevertheless if you own a regular old “entry” Peloton Bike, you may want to at least give Lanebreak a try to see what it feels like when the resistance is automatically changed during a workout.