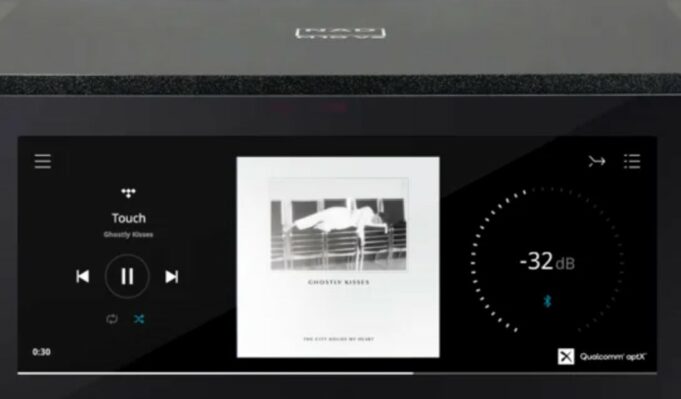 Hi-fi component maker NAD Electronics has taken the wraps off an updated version of its flagship music streamer.

With the NAD Masters M10 V2 BluOS, the Pickering, Ontario-based company Lenbrook tells us all we need to do is to “just add speakers” to enjoy hi-res audio.

“The original M10 caught the industry off-guard and made audiophiles and non-audiophiles reimagine what hi-fi can and should be,” stated Cas Oostvogel, Product Manager for NAD Electronics. “The M10 V2 continues where the first left off and adds even more versatility as a two-channel or potentially a wireless home theatre system.”

Featuring 100 watts of amplification new additions to the V2 model include:

As with the existing M10 the integrated amp features its in-house BluOS streaming operating system. That means users will be able to stream high-res audio from the leading service providers like Tidal (with support for full MQA decoding), Amazon HD, Deezer, and Qobuz. There’s also support for Spotify which remains at standard resolution, at least until later this year when the leading music streaming service is expected to unveil its own hi-res offering.

Those who loath running cables to rear speakers will appreciate that the M10 V2 can transmit wirelessly to them to build out a Dolby Digital Surround Sound-based 4.0, 4.1 or 4.2 system. 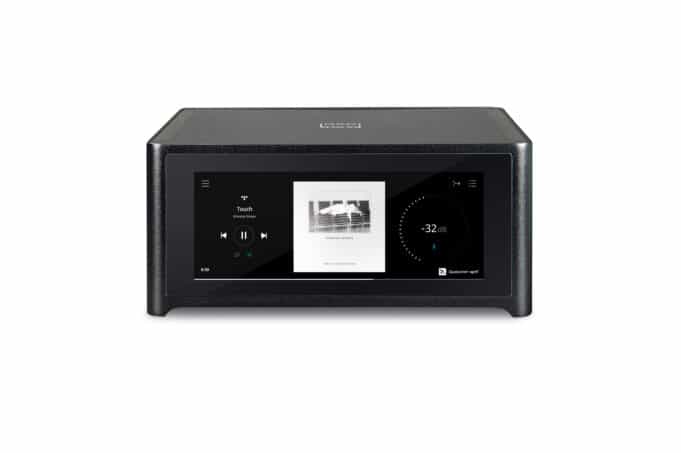 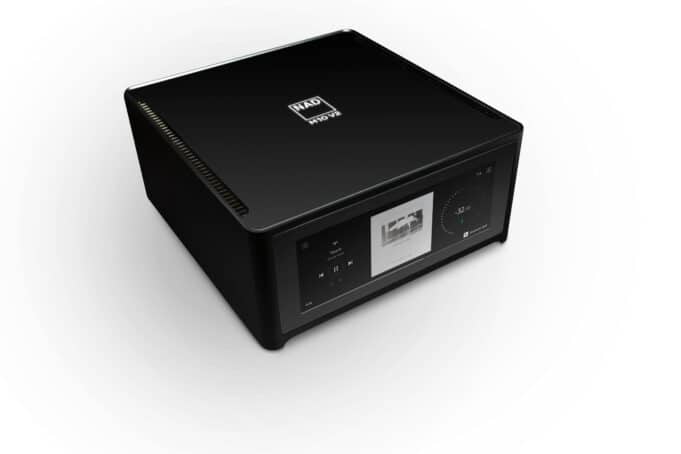 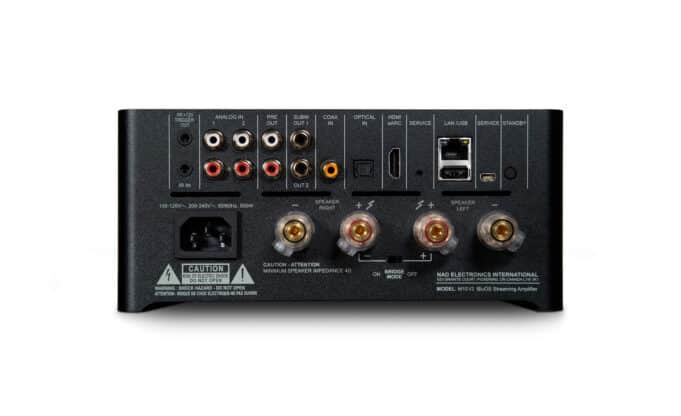 This is a pretty chunk of audiophile-grade kit.

That gorgeous 7-inch IPS color display is an immediate attention grabber to be sure. Album art is front and center (I admit, I’m a sucker for the visuals), flanked to the left by touch-based transport controls and on the right by touch-based volume control.

Aesthetically the design strikes all the right notes. After all, flagship streaming devices should look the part, especially at these prices.

I mean look at it, this is how you do it folks:

I should point out that in the press photos and even product listings for the existing M10 the unit might look large. Deceptively so. It’s understandable given we instinctively project the standard “AVR” type dimensions when we see these announcements. However, in actuality the M10 is only 8 1/2″ wide and 10 1/4″ deep. So when the marketing team refers to it as “small and mighty” there’s some truth there. Indeed the M10 could easily be the star of an office or desktop listening station.

As for its audio performance we’ll have to wait and see once the unit starts shipping. Note that Dirac Live room correction is included, so users should be able to dial in custom sound curves to possibly suit even the most challenging rooms and acoustical situations.

Obviously at $2,749 the M10 V2 will appeal to serious, well-healed audiophiles — those who want an attractive unit that is pretty much plug-and-play and able to connect to all of today’s best music services. The DIY Raspberry Pi folks will continue to do their thing and build capable budget streamers. It’s kind of interesting that there is so much choice and price and technology diversity in the market today. Don’t forget the upstart Chinese players. Companies like SMSL, Topping, Sabaj, Loxjie and Gustard among many others (likely with little name recognition outside audiophiles and head-fis) are designing and manufacturing quality components (DACs and headphone amps namely) for highly competitive prices with generally outstanding engineering measurements.

Side note observation: interesting the NAD marketing team opted for “Bold Modernity” as the headline descriptor for the M10 release.

Also worth pointing out is the M10 is clearly targeted at the speaker crowd. Hi-fi types will likely look elsewhere as there’s no headphone jack — though there are RCA pre-outs, so running to an external headphone amp is a possibility, but an extra step.

Regarding the overall market for high-resolution audio, Apple gave it a boost this summer when it introduced lossless and Spatial Audio (Dolby Atmos) for its Apple Music streaming service (which can be cast to the M10 using Airplay 2). Further putting pressure on the competition, Apple didn’t charge extra for the new features, meaning all existing subscribers potentially benefitted from higher quality streams. Do note to play the best that Apple Music has to offer (ALAC 24-bit/192 KHz) requires an external DAC (digital-analog converter) which is exactly part of what the M10 V2 offers — it can decode high-res audio files and send the signal to analog outputs connected to your speakers.

In any case, with Apple onboard the lossless train, and Spotify soon to follow I expect the market for these types of streamers and external DACS to continue to not only grow, but become more familiar to audio shoppers.

Many will be perfectly fine just using Bluetooth or an Apple 3.5mm headphone dongle. But for those who want the best possible music reproduction — as the artists’ intended when recording in the studio — then something like this (beautiful) M10 V2 BluOS will be definitely worth a look.

Stateside I’d look to Crutchfield as one of the first authorized dealers to get M10 V2 inventory.