Just a few of the latest technologies that Peloton Interactive (NASDAQ: PTON) has acquired.

Bloomberg reports that the trendy at-home fitness company that exploded in growth thanks to shelter-in-place life that started in early 2020 has bought three companies.

They’re all relatively minor investments and include the following:

All told Peloton spent $78.1 million (USD) in cash for three companies in the final quarter of 2020 (note Aiqudo closed this year and is not included in that total).

As a Bike owner I enjoy writing about the Peloton experience here on Stark Insider. I also like to dabble and follow the company’s strategic moves. Like many I wonder. What future products are in store? How will Peloton maintain and build upon its market momentum? And at the macro level, how will the industry shift and/or return to normal post COVID-19?

Analyzing moves like these technology buys can provide clues.

Though, I do keep in mind that just because a company buys another doesn’t necessarily mean that it will result in a new product or product line. As we see here in Silicon Valley all the time, many times these moves are made purely to scoop up talent with a specific knowledge base. That could be true here. It’s all hard to say. Still, a little armchair quarterbacking can be fun from time to time.

And with that here’s some thoughts on each of the moves.

Could Peloton soon add a voice assistant to its Bike and Tread products?

Given that just about everything within today’s smart home (and now cars too) can be controlled by voice it makes sense… to a degree.

However, why not just use Amazon Alexa or Google Assistant? They’re the market leaders. So why re-invent the wheel with something proprietary?

Per the Aiqudo’s web site:

Current digital assistants don’t DO enough today. They create walled gardens where many popular services are just not available. The result is that users continue to use their mobile apps to get things done.

It goes on to say how the Aiqudo Q Actions Platform “bridges this gap between virtual assistants and mobile apps.”

I don’t fully understand the benefits here. The Q Actions app (iOS and Android) allows you to use voice commands to execute actions within apps. So in a sense Aiqudo is an umbrella that covers it all without necessarily needed to configure each app with a voice assistant.

As for how this plays into Peloton’s future it’s hard to say. My guess is this is a talent play. 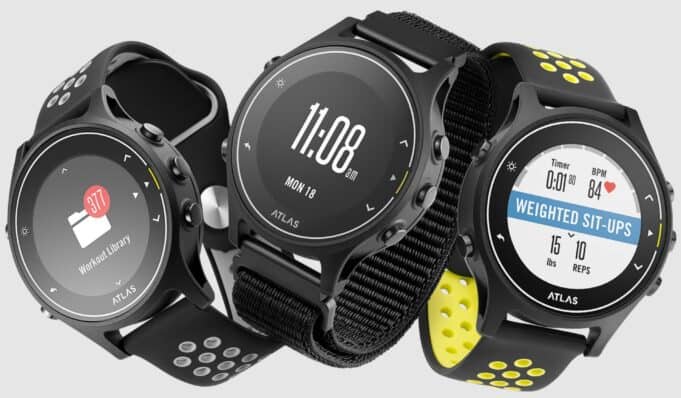 Could there be a Peloton Fitness Tracker (smartwatch) in the future?

Based on this acquisition I’d say it’s likely. It would certainly be a natural extension of the overall Peloton experience and could be purpose-built specifically for fitness and health tracking with the Peloton apps.

But the elephant in the room: the Apple Watch.

Apple is the dominant player in wearables. By far the number one choice and market leader. It would be a tough sell for an Apple Watch owner, like me, to swap out for something else after all these years. Plus, my Peloton Bike already sends post-ride workout data to my Apple Health/Fitness apps so everything I need is recorded and available for health tracking and analysis.

Still, a case can be made for a Peloton branded Fitness Tracker:

Possibly semantics but I’d classify the Apple Watch as a “smartwatch” and something like the Atlas Multi-Trainer as a “fitness tracker” (like Garmin, Fitbit and others).

A quick glance at the Atlas web site (update: it’s now dead) reveals that this is a product still under development, with no retail shipping units yet available.

I’m chalking this one up as a soon-to-be Peloton Fitness Tracker with a 50-60% probability (pure speculation on my part). It would integrate with the Peloton app and, of course, with its hardware including the Bike and Tread lines. 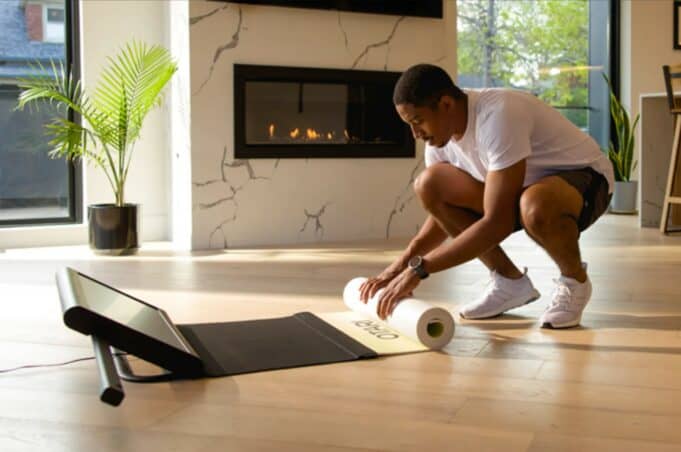 Will Peloton go after the likes of the Lululemon Mirror with its own smart hardware focused on floor workouts?

Otari makes a workout mat with a built-in screen (see photo above). The idea is straight forward: you stream classes on the large screen and follow the instructor using the roll out mat.

Unlike the Mirror which needs to be mounted to a wall the Otari seems to be a more compact and portable option for mat-based workouts.

Currently, I use my iPhone or Google Home screen when taking Peloton strength, yoga, strength and stretching classes. That works well enough. But I suppose having a larger screen right in front of me on the mat would be an even better experience — having to plug it in, though, seems a nuisance.

Worth noting this concept was the result of a Indiegogo campaign from last year which apparently raised $99,530 from 247 backers.

Now that Peloton is the owner there will be more than enough resources to make this interactive mat a reality.

My vote: slam dunk. Yes, we will see a Peloton Workout Mat based on the Otari prototype hit the market in the coming year or so (70-80% probability).