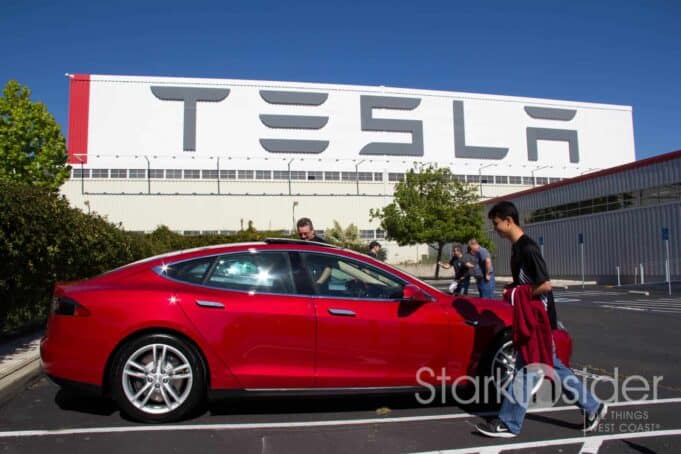 A new report today ranks the 50 states and DC in terms of efforts to drive EV adoption. California came out on top, with New York a distant second.

The American Council for an Energy-Efficient Economy (ACEEE) conducted analysis across six categories from EV infrastructure and EV incentives to electricity grid optimization and transportation system efficiency. Each category was assigned a weight, and a total score calculated out of 100 total points (the best possible outcome).

“Transitioning to electric vehicles is vital for the climate and for reducing costs for households and businesses,” said Bryan Howard, state policy director at ACEEE and lead report author. “The leading states are embracing this transition, but many more are just starting, even as the automakers are preparing a burst of new electric models.” 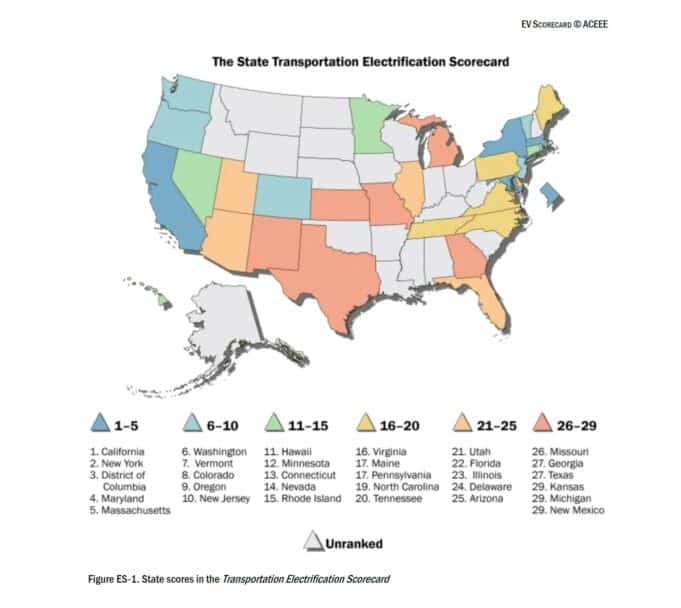 The report summary notes that while many states “have taken promising steps to electrify transportation, all have considerable room to improve their policies.” And that the shift to an EV future “will be necessary to bring emissions to zero and support livable communities.”

All told the report scored states on some 40 policies in total.

The report was backed by Xcel Energy, Consolidated Edison, and the Merck Family Fund.

California Leads in Backing the Use of EVs

A specific call-out regarding the results for California:

To determine its final score for each of the top 30 states and DC, ACEEE used the following six categories to roll-up a 100-point score:

State policies with regards to EVs and related infrastructure will become increasingly important in the coming months and years. Without incentives, guidelines, progressive policies for things like emission controls and plans for the transition to an EV future, it will be difficult to rein in greenhouse gas (GHG) which the transportation sector, as noted in the report’s executive summary, accounts for 28% of output. And given that EVs have only 2% penetration in the overall U.S. vehicle market there’s a long way to go — and a sizeable opportunity for many.

Authors of the ACEEE report say that there are a few key barriers to entry that potential EV and fleet owners must overcome, specifically:

Indeed with more competition coming to the leader in Tesla, from start-ups such as Rivian, to Chinese players Nio, Li Auto and XPeng as well as established automakers such as VW (ID.4), Porsche (Taycan), Ford (Mustang Mach-E), GM (Chevy Bolt), among so many others (including OG Fisker, still in the game!), EV costs should eventually decrease and prove more accessible to a broader buyer base. Or, at least manufacturers will offer entry models, as we’ve seen with the new lower priced Tesla Model 3 and Model Y.

That California tops the states so far is no surprise. After all, this is home to Silicon Valley and Tesla itself (Fremont factory), so there’s no shortage of innovation and openness to green initiatives. I know that California has been aggressive too with incentives. In past years you could even apply for a $7,500 credit on your new EV purchase — quite a nice chunk of change. Currently as I’ve been researching the Model Y (to possibly replace an ever dependable Toyota Prius) it’s nice to see other incentives too such as the current California Clean Fuel Reward (up to $1,500) and the Clean Vehicle Rebate Project (CVRP) (up to $7,000).

Also in my home state Governor Gavin Newsom has signed an EO mandating all new vehicle sales be zero emission by 2035 — so long ICE. That’s only fourteen years from now. For such a sweeping change in such a massive industry there’s sure to be seismic waves across all parts of the supply chain.

Meantime, getting the garage EV-ready takes a bit of planning. More than likely if you’re like me you’ll need an upgraded power outlet. Then you’ll need to buy and pay someone to install a home charger. Hopefully homes in the not so distant future will already feature upgraded garages that are “EV ready” — I’m guessing there’s builders out there already offering them as surely they’re a good marketing pitch for potential buyers.

In any case, just a few thoughts to add to the discussion.

The report “The State Transportation Electrification Scorecard” should be available on the ACEEE web site. Be warned. It’s 178 pages in total; though the actual core is only 65 pages with the remainder devoted to references and appendices. Those interested in government policy with respect to the burgeoning EV market would do well to take a look.

In addition to this Electrification report, the ACEEE says it will also publish its annual GreenerCars report — a ranking of greenest vehicles now available to consumers — later this month.