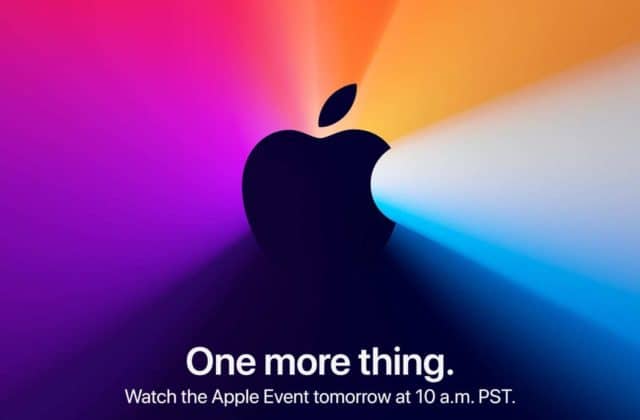 Apple tomorrow is expected to reveal refreshed editions of its MacBook laptop range. Except this batch will be (much) more than a typical refresh. CEO Tim Cook announced this summer that the Cupertino-based company would shift to ARM chips made in-house. The move would likely end the Intel partnership that has for so long provided for Apple CPUs, most notably for its laptops.

“One More Thing” as the event is marketed will mark the end of an era. Bringing silicon under its own control enables Apple to better control logistics and supply chains. In theory at least it could also mean lower costs, and, hence, increased margins. Other niceties include better predictability, stronger integration between the ARM CPUs and the rest of the MacBook motherboard components and processes, which could yield increased reliability, performance and reduced thermal power draw. All speculation of course, but we will know more soon enough.

The other key element that comes with the move to ARM is that it brings the MacBook chipset in line with those already found on the iPhone and iPad. And logically that means enhanced compatibility and, in my estimation, eventually complete integration. Would it be possible that Apple merges its codebase for its desktop and mobile devices? In the near future we may not have MacOS, iPadOS and iPhoneOS. Instead, I’m expecting AppleOS. It’s not far fetched to believe this integration will come to fruition, and for Apple it means a potentially easier engineering process thanks to a single codebase (okay, I’m talking in very simple terms). On the other hand, there could be, as they say, too many cooks in the kitchen as that single AppleOS will need to serve the needs of several devices. If, however, those devices are all running the same ARM chips — or within the same ARM chip family — then aren’t they basically all simply Apple devices available in different sizes, and not iPads, iPhones and MacBooks?

In any case, here’s what we do know about the “One More Thing” November 10 event.

Revenue for the Mac division accounted for $9 billion of revenue in Apple’s most recent quarter, and the company has previously said the entire Intel to ARM transition will take two years.

Others suggest we will only see the 13-inch MacBook Pro at this event with others to follow soon after.

Regardless if we see three MacBooks or one MacBook tomorrow is really not the point. The march to ARM has begun, and any one of the three MacBooks mentioned above will give us a window into Apple’s future.

In addition to the new hardware it wouldn’t be a surprise if Apple also announced an official release date for macOS 11 Big Sure. My guess is this will be the last major Mac-only OS release as the integration across its various hardware devices accelerates thanks to ARM. Again, AppleOS.

I’m hoping ARM brings increased battery life. And as a hardened 15-inch MacBook Pro user wouldn’t it be nice if the A14 chipset allows Apple engineers to design a more compact shell? One can dream.

As is the case during COVID this is purely a virtual event that can be viewed at apple.com. In some ways the new presentation format has been a pleasant surprise. In absence of a live audience and pauses for awkward and distracting applause-lines and hooting and hollering which I think a lot of us can do without we instead get a super-slick online production that we can all view from the comfort of our homes. More content, less chrome. It works for me.