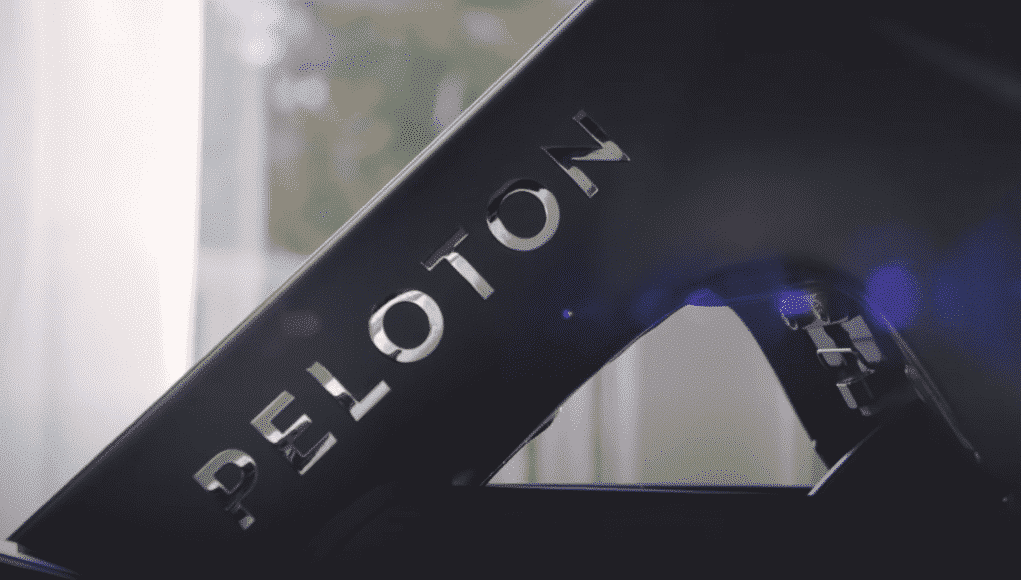 A quick look at the new Peloton Bike+ features. Plus, for existing owners is Bike+ worth the upgrade?

Recent buyers, within the 30 day return window, should get an email from Peloton with an automatic refund for the price difference ($350 in the U.S.). Chalk this up to excellent customer service.

And for existing Peloton Bike owners such as myself who are wondering if a trade-in program is available the answer is yes. More on that below.

You can see a quick preview of the new Peloton Bike+ in this video:

Watch: An Inside Look at the Peloton Bike+

You can trade in your Bike and Peloton will credit you $700 USD towards the Bike+. I bought my Pandemic Peloton in March for $2,245 so clearly the value proposition here is not great. But for those who have had their bike for several years the upgrade may make sense.

In any case, for existing or new Peloton shoppers here are the key new features worthy of consideration in the new Peloton Bike+: 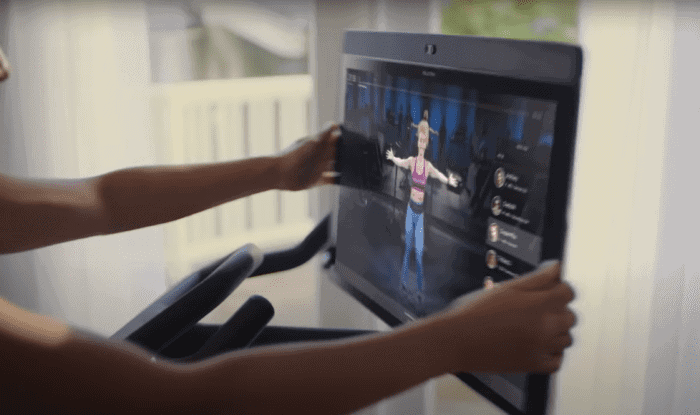 Bigger is better. Right? Peloton is making a big deal out of the updated screen. At 23.8-inch it’s slightly bigger than the 22-inch screen found on the current Bike. Not much difference there. However, the new one rotates left and right. That means you can jump off the bike, swivel the screen and enjoy a floor-based workout right next to the bike. Using the same screen without having to move to a different space and use a TV or iPad to stream a class is convenient. In conjunction, Peloton is expanding its “Bootcamp” classes to the Bike. These have already been available on the Tread and now you can take these classes which focus on a total body workout, combining time alternatively on the tread/bike and on the floor in the same class. These workouts will be led by Robin Arzón, Jess Sims and Cody Rigsby.

For new buyers the rotating screen affords a new type of workout (Bootcamp) and if you have the space next to your bike or treadmill could make for more intense, cardio-based workouts. I don’t have any extra space next to my bike, and take mat-based classes in another room so being able to rotate the screen is something I won’t miss. 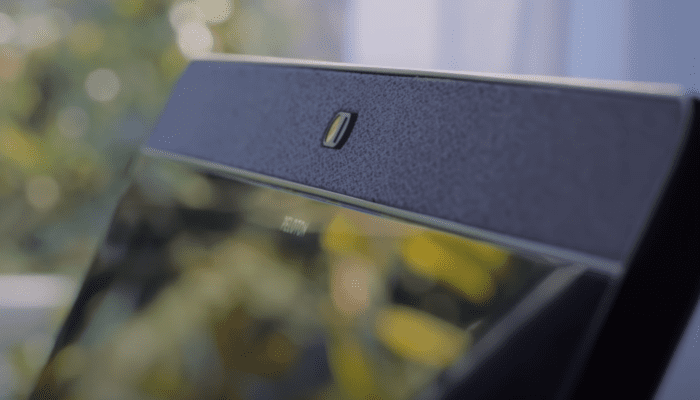 Also included in the new tablet is a “high-fidelity four-speaker sound system.” I can tell you the existing speaker in the original Bike is not so great — it’s like what you might expect from a budget Android tablet. So I’m sure this new one on the Bike+ will be a huge step forward.

I wear earbuds when working out. Often I’ll even listen to my own music (obscure 80’s new wave from Canada) when taking a low impact or cool down ride and turn on sub-titles to zone out. Plus, I don’t want to disturb Loni Stark when working out — and vice-versa — so I never use the built-in speaker on the Peloton. So, again, this new feature really has no impact to me. 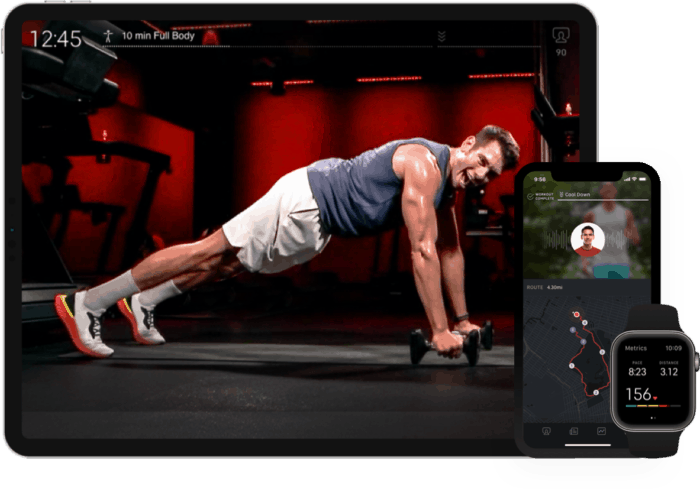 This is pretty slick. With the Bike+ you can sync your Apple Watch by simply tapping the Peloton screen (the new screen has a NFC chip built-in that facilitates wireless communication between the watch and bike unlike the current model). When you do this all the metrics collected by Peloton during a class will be sent to your watch. Also, Peloton will use the heart rate monitoring feature on your Apple Watch. That means you don’t need to wear an additional HRM band. Note that you can already link your Peloton Bike to Apple Health by entering your credentials into the preferences settings. After a class, the data is sent to your Apple account. However, in practice it’s a little flaky. And there’s no way to use the HRM feature on Apple Watch. I expect GymKit to provide a much more robust integration between the Apple Watch (and Health, Activity apps) and the Peloton Bike, though we won’t know for sure until we test it.

Out of everything announced about the Bike+ this is my favorite feature. I currently strap on a Scosche Rhythm+ heart rate monitoring arm band before a ride. No big deal. But if I could use my Apple Watch instead that would be one less step and one less device to charge. 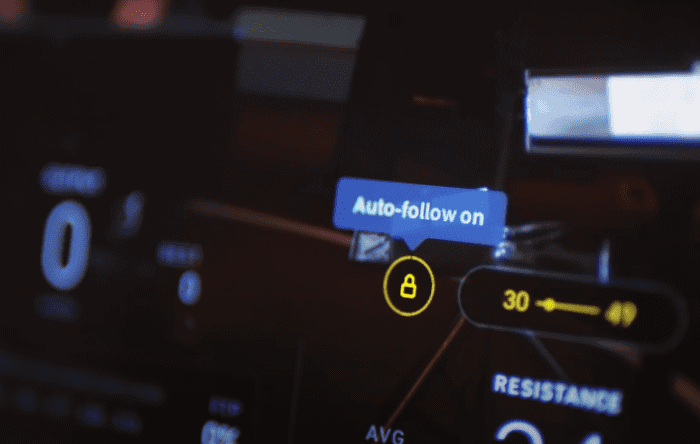 Currently when you take a Peloton spin class the instructor calls out resistance and cadence target numbers. You in turn adjust the iconic red knob (left for less resistance, right for more) and your pedal speed accordingly. Some of the competition — most notably NordicTrack — offer bikes with auto adjusting resistance. The idea is that you don’t need to worry about adjusting anything other than just your pedaling intensity, the bike will do the rest. In the words of Peloton: “Auto-Follow digital resistance system that automatically remembers your Target Metrics and scales your resistance up and down based on instructor guidance, allowing you to fully lose yourself in the class.”

Auto-Follow sounds like a good idea. And it gives Peloton feature parity with some of the competition. In terms of whether it makes a spin class better I’m not necessarily sure. I find myself enjoying the flexibility of spontaneously adding or decreasing the target call-out from the instructor depending on my particular mood and energy level. I can do that easily with the knob. And I definitely feel engaged. On the other hand not having to think about it during a ride is perhaps a nice option. And speaking of options I suspect you can turn this feature off, so having it is a plus.

Upgrades and Bike vs. Bike+ 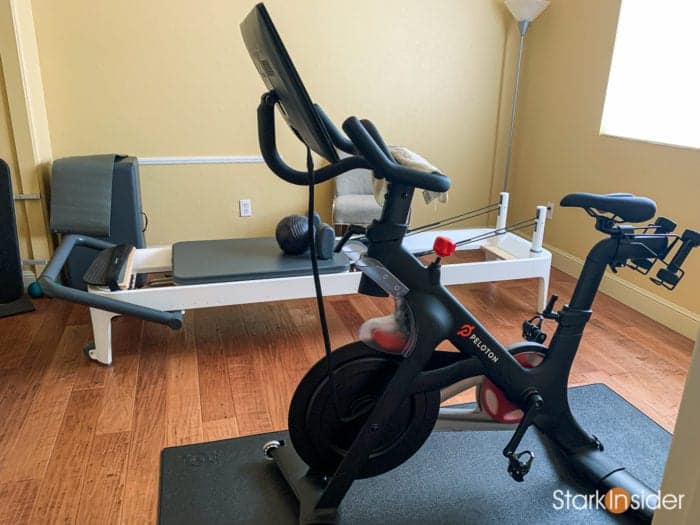 For existing owners considering an upgrade, Peloton will give you a $700 USD credit towards a Bike+ when it picks up your original Bike — not exactly tantalizing. Given COVID-19 and the logistics involved in shipping around products that weigh 100+ pounds this is understandable. From an upgrade perspective it will rule out the option for many, if not most of us. Those that have owned one for many years and have put wear and tear onto the frame and perhaps are even experiencing some minor issues could see upside here with an upgrade.

Aside from the above four major updates it looks like Peloton has made a few other design tweaks to the new Bike+. Visually I notice a few things:

For new Peloton shoppers I think the original Bike at the new low price of $1,895 is the best option. If you were on the fence before today’s announcement then your decision became a whole lot easier. Inexpensive? No. This is still a fairly pricey product. Compare it, however, as we did to the net out-of-pocket cost of an ongoing gym membership and you may discover the ROI is better than you might have anticipated. Plus the convenience of hopping onto the bike on a moment’s notice without needing to drive anywhere and change in a stuffy locker room is icing on the cake. With the lower priced bike you don’t get the swivel screen, or GymKit, or the soundbar, or auto resistance… but think through each one and you may realize they aren’t needed and really don’t impact the Peloton spin experience — it’s top notch either way.

For those with the budget and for those beaten down by shelter-in-place maybe the new Peloton Bike+ is a deserved splurge. At $2,495 it still undercuts the wave of “smart bikes” hitting the market. Many of those such as the Tacx Neo Bike and Wahoo Kickr Bike sell for well over $3,000. All of a sudden Peloton looks like a bargain by comparison — and, note, those smart bikes don’t even include a touchscreen!

What is Bike Bootcamp?

In addition to the new Bike+ and Tread and price re-positioning Peloton also announced a new class format called Bike Bootcamp. What is it exactly? Here’s how Peloton describe it in today’s blog post:

Sounds a lot like the Bootcamp classes for the Tread where you do station-like training, bouncing between the tread/bike and floor. But with the bike I wonder how we’ll deal with the cleats on our feet? We will take them off and finish a Bootcamp on the floor? Or leave them on and do floor routines in (noisy and uncomfortable) cleats? We will know soon enough when the classes roll out beginning on September 15, 2020.

And… a personal truth bomb…

Before I wrap. A personal truth bomb.

You know what? Thinking about today’s announcement a bit I’m kind of glad the Bike+ is only an incremental upgrade. After all, Peloton could’ve gone whole hog and re-engineered a whole new bike from the ground up with all sorts of gizmos. If they had done so I’d be lusting. That’s for sure. The shiny new thing! It’s what we techies sadly do. Instead this is a refinement of an already excellent product.

So given that Loni Stark and I only just bought our bike in March I’m quite happy that it’s essentially the same. If I do want to take Bootcamp classes I can still view the monitor and workout from behind the bike (space will make it a challenge though). As for the Apple Watch integration with GymKit I really like that. For now though I can keep using the original bike’s built-in cloud sync that shoots ride data over to Apple Health. It takes a bit of (random) time and sometimes it’s wonky (like when rings roll back darn it), but eventually the rings and data update and I can see everything in Apple Health. I’ll admit it’s quite selfish to be thankful that this is merely a tweaking of the existing bike, but at least I feel somewhat better after confessing.

Monthly membership fees remain the same at $39/month. A digital app is also available for those who don’t own a Peloton bike or treadmill with subscriptions priced at $12.99/month.