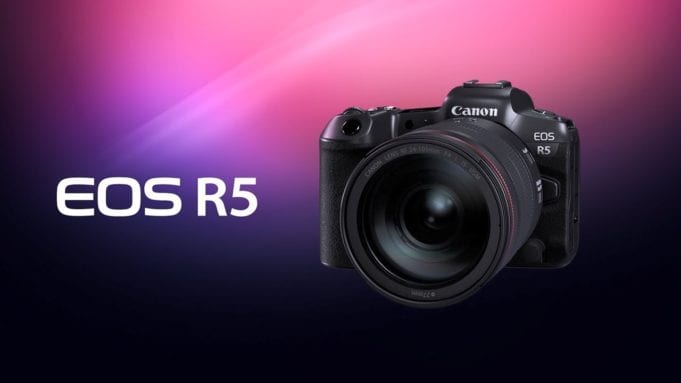 There’s a purpose. At least I’ve told myself there’s one. At her “request” I’ll predominantly use the R5 for taking highly detailed photos of Loni Stark’s artwork (mostly oil paintings). She needs them to help sell her work and show them digitally in the best possible light. Then again, maybe it’s not so much a purpose as it is a master plan. No doubt, “on the side” I’ll also dabble with video. Canon has the best auto-focus thanks to DPAF, and like many I’m curious of course to test 8K, though I’ll be shooting mostly in the far more pragmatic 4K modes — yet mostly be, obviously, taking photos of Loni’s work.

Canon EOS R5: Is it really the best tool for video shooters?

But for those interested in the R5 and R6 primarily for video I have a question:

For starters the flagship R5, which on paper looks like the most epic mirrorless of all time, features a massive 45MP full-frame sensor. Videographers, YouTubers and indie filmmakers typically opt for smaller sensors, ones that allow more light. Plus they typically produce less rolling shutter distortion — not to mention easier to handle file sizes. Isn’t the R5 meant to be a stills first camera? I see it competing with other high resolution full-framers like the Sony a7 IV (superb), Panasonic S1R (haven’t yet rented), and Nikon Z 7 (haven’t yet rented). For video it seems there are better choices, including the upcoming Sony a7S III. Or even entry cinema cameras purpose-built for video like the Canon Cinema EOS C100 II and Blackmagic URSA Mini and Sony FX9.

Then there’s the R6, a much stronger candidate for video in my view. With a 24 MP sensor this one makes more sense. File sizes will be reasonable, low light performance will (likely) be better. And you still get the outstanding DPAF, dual slots and great ergonomics that Canon is known for. Yet, it’s still full-frame. Do you really need a full-frame camera for video? Really? Why? Fair enough, you may have a reason that suits your particular needs. My guess is most don’t and are just chasing the latest shiny thing. Hence: R5! R6!

Why, not instead, consider a Panasonic Lumix GH5?

With the GH5 you’d save a bunch of money and get an outstanding camera body renowned for its video prowess. You’ll get 4K (seriously, nobody needs 8K), available V-log for color grading flexibility, 10-bit 4:2:2, high frame rates. Plus the GH5 is a (lowly) MFT mount. In my experience that’s a good thing. You can easily adapt all sorts of glass. Buy a Metabones Speedbooster and you gain a stop of light, slightly more FOV, and you can easily mount any of your EF/EF-S lenses. Wins all around. In addition, there’s the lightweight nature of Micro Four Thirds. In a pinch forget about the adapter and Canon glass, and instead travel light with super compact native lenses. That’s a nice option to have. Big bonus: MFT lenses are mostly inexpensive by comparison to pricier stuff you’d find on other systems most notably the stratospherically priced RF mount which is used on both the R5 and R6 (I plan to use a RF/EF adapter… if I can only find one in stock).

I haven’t yet mentioned overheating (see above chart regarding official video recording limits for the R5 and R6 across various resolutions and frame rates).

Limited recording times seem to be the major headline surrounding the R5 (and R6 too) before it ships later this month. That’s something to keep in mind. Depending on how you shoot and use the camera during productions these publicly published limitations by Canon may not matter. If you shoot long form they most certainly will (and, again why on earth are you looking at an 8K full-frame camera for long form content??). Just something to keep in mind. We won’t know for sure how bad this overheating issue is until the final units ship. For now I think it’s much to do about nothing and silly times for opportunistic YouTube video titles (!). But I do know this…

Canon EOS R5: But what about that hit wonder known as the Panasonic GH5?

The Panasonic GH5 does NOT overheat.

I’ve shot videos for Stark Insider with the GH5 since its release three years ago and not once has it failed or overheated on me. That includes hot summer days here in the San Francisco Bay Area, and also on several occasions when I brought the camera down to Loreto, Baja California Sur, Mexico to shoot some short film footage. Solid as a rock. Unlike the Sony a6500 — which overheated on me in … Iceland… during winter… at a frozen waterfall… that wasn’t much fun. I have to say the footage was/is pretty though.

The Panasonic GH5 does NOT overheat.

Just something to think about:

That’s about $2,600 in savings. Some of that you could use to… survive the pandemic? Or, okay, have at it and spend more on extra batteries, lights and other bits you’ll need for your projects. Realize you’re going to Hell, but still likely spend less than the R5 body alone. Yes, it’s a shiny new thing. But is shooting with a R5 or R6 rather than a GH5 or GH5S really going to improve your creativity, and the quality of your video work? Will you get paid more?

(I’ll share my experiences soon enough here on Stark Insider when I get my R5… which I’ll be using mostly for shooting highres photos of Loni’s paintings… at a moment’s notice… because that’s the purpose… to take nice photos of Loni’s work… *with a dash of video on the side* … ah, master plans…)