5 out of 5 stars - 'Outstanding - Starkie!'
Price: $199 USD (Amazon)
PROS
+
Beautiful design, powerful output for an Echo speaker, clean mid-tones and separation, bass to spare, volume without distortion, Alexa voice assistant is still the best
CONS
–
Some types of music might require more volume to appreciate the multi-speaker Atmos-inspired output
VERDICT:
"Outstanding - Starkie!"
The best Echo speaker for pumping out music without sacrificing balance and clean separation of the mix. Still, keep expectations in check, this is not audiophile gear.
Review by Clinton Stark

As a long time Sonos enthusiast it pains me to say I’ve slowly migrated to an Amazon Echo multi-room setup.

I definitely miss the Sonos app, which I believe is still best-in-class. It’s easy to find various stations across Amazon Music, Spotify, Pandora and the like, and it’s especially well organized and just does everything about right.

However, Echo speakers are just so versatile — and, comparatively, well priced. Over the past few years I’ve waited for sales and replaced a Sonos here and there with some sort of Echo speaker. 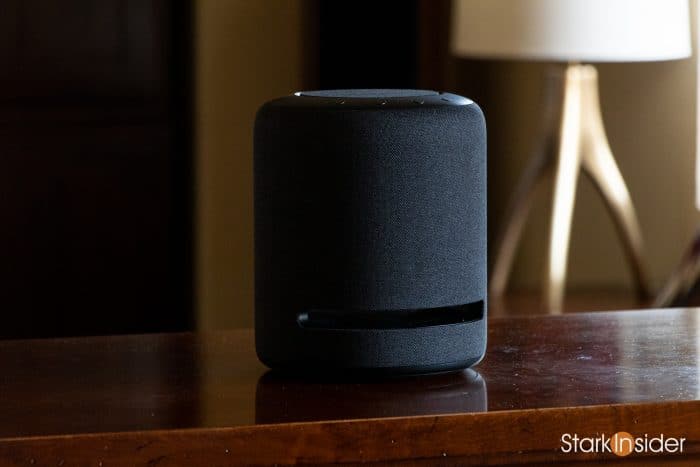 I’ve had the Echo Studio for a while and have enough time to form an opinion on its functionality and sound quality. Again, this is predominantly coming from a former Sonos guy.

Given the Studio is presumably the best sounding Echo speaker (aside from Amazon’s TV speaker offerings) I placed it where I listen the most, and that would be my home office. There the Echo Studio replaced a much-beloved Sonos One (Gen 2). 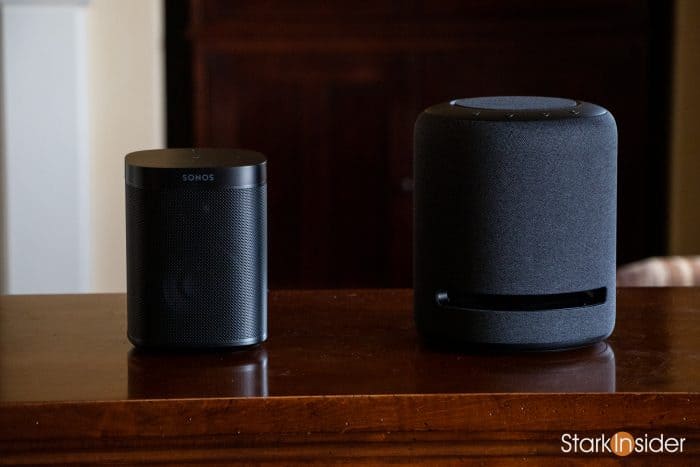 Construction appears top notch. Control buttons placed top-side are tactile and easy to find when needed (though I do almost everything through the Alexa app so this doesn’t matter too much in real-world use). It’s a hefty device, with a girth much larger than your garden variety Echo speaker. Of course, there’s a reason for that, and I’ll get to that in a bit when I talk about sound quality.

Amazon did some nice detail work here. And I’m a sucker for attention to detail.

For instance, the plug features a rounded, svelte design; sort of reminds me of a Sweden-inspired kind of design. It’s elegant. Not the most important design element of all time, but when you have the Echo Studio plugged into a wall outlet it does look far nicer than typical, block-y plugs found on most consumer electronic products these days. Kudos for that design touch — not necessary, but much appreciated.

To be fair I never had any complaints about the Sonos One speaker. It too is well designed, and feels like a solid chunk of industrial design. I do prefer the tactile button on the Studio vs. the touch-based ones on the Sonos. Again, if you use apps like I do this is a minor difference. 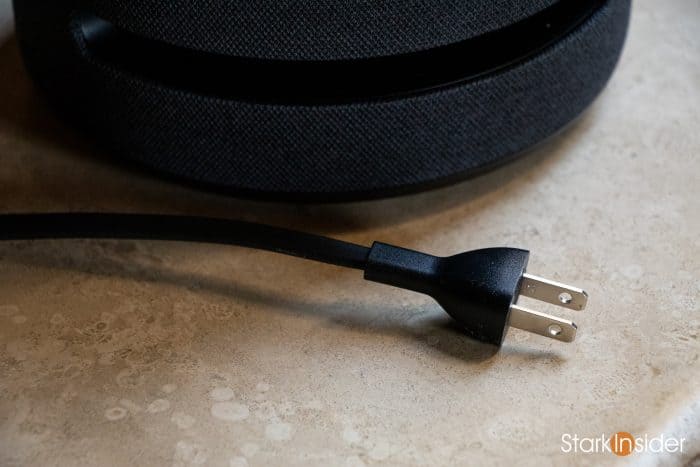 The Sonos One is much smaller. So if you’re planning to use this kind of speaker on a desk or bookshelf than that’s a consideration. In these situations the Sonos One or standard Echo speaker would probably be the better choice. In my case I have the Studio sitting on the floor, where I find it sounds fantastic, and has plenty of space to accommodate it’s slightly larger size.

One more thing about design worth pointing out. I absolutely love what Amazon (and Google too) is doing with fabrics. Is that the right word, fabrics? Either way, there’s a soft cloth layer on the Echo Studio that softens the overall texture, and provides a really zen look — for lack of a better descriptor. Design-wise we’re seeing this trend on things like the Echo Dot, Google Home, Echo Show, and even smartphone cases too. I like it a lot. 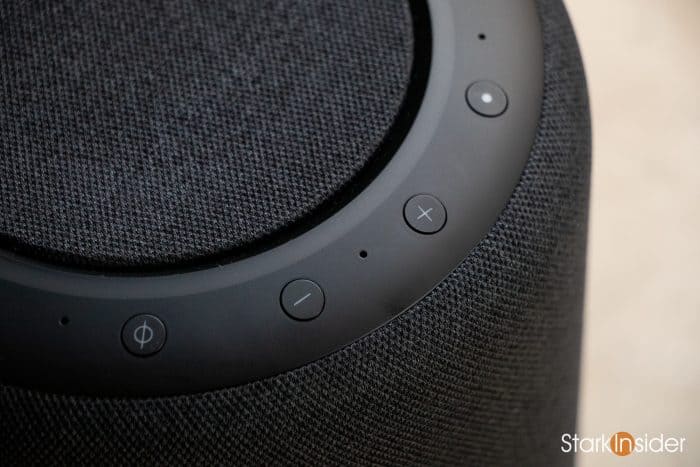 When it comes to Alexa voice responsiveness and overall experience, the Echo Studio is hands-down the winner. That’s not much of a surprise given it’s made by Amazon and has the native Alexa voice assistant we’ve all come to know built-in.

Sonos One too has Alexa. But… it’s not great. At least in my experience. Often the Sonos won’t pickup the “Alexa” hot word, and you need to repeat it before there’s a response. Certain commands weren’t even available on the Sonos One, though I believe over time that’s changed (I no longer have a Sonos One to test the newer software updates).

For those that care about Alexa, the choice is clear: go with the Echo Studio. If not, then this is a non-deciding factor. 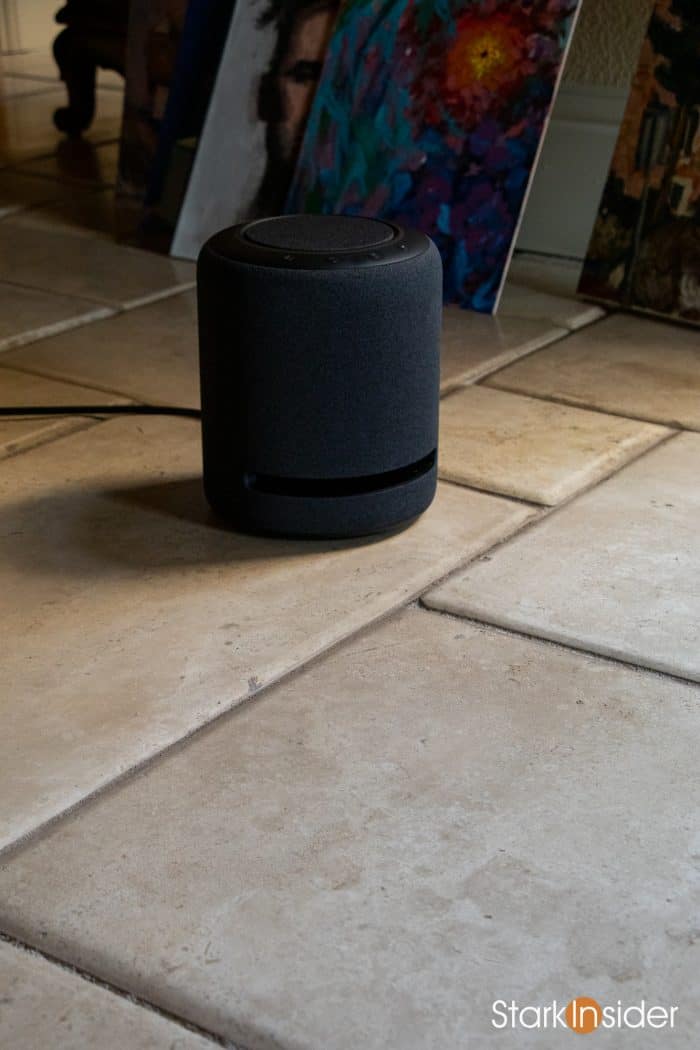 Okay, this is the big one. After all, if the design is great and Alexa great what’s the point if the sound doesn’t deliver?

During media briefings at the Echo Studio launch a lot was made of it 5 speaker layout, and ability to play Dolby Atmos tracks and 3D music. Further, the speaker can adapt automatically to a room’s acoustics and adjust accordingly to maximize sound quality. As a guy that loves music, a lot of that appealed to me. I have an Atmos-enabled home theater, and it blows me away every time I watch a movie that has an Atmos track. So I was eager to setup my Echo Speaker and do some A/B listening with the trusty old Sonos One (before I sold it).

I will admit, I was expecting a clear cut winner. This would be a slam dunk in favor of the tech-ladden, newer Studio right?

Well, not quite it turns out.

Sound-wise the Studio doesn’t necessarily sound better. At least not at normal listening volumes. Rather, it sounds different than the Sonos One.

I’m guessing that because Amazon is trying to place sound with the Echo Studio, there’s less immediacy to the sound. Listen long enough and carefully and you do get a sense of more separation on the Studio speaker. For instance, strings might sound over there, while the bass line is right here. It’s hard to explain in words without a real world listen. The sound is likely more akin to a small home theater setup where you have dialog separate from the left and right channels. Though not quite as separate as a true home theater multi-speaker setup, there is that feeling here with the Studio sound.

At a Glance:
Amazon Echo Studio 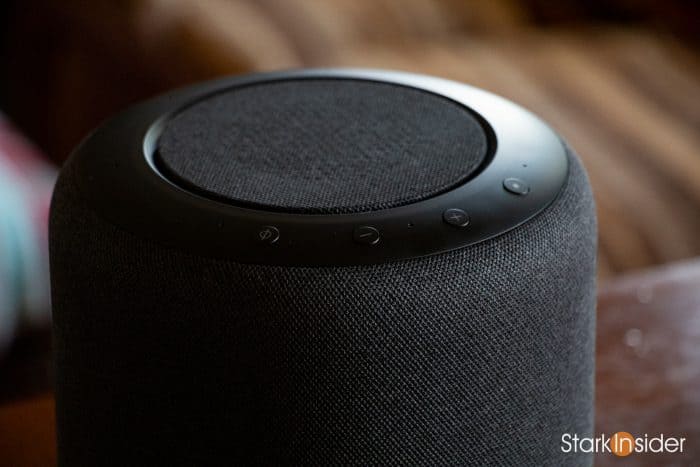 Automatic room adaptation:
Analyzes the acoustics of the room and continuously adjusts audio filters during music playback to optimize sound output regardless of placement (requires device is not muted).

On the other hand, the Sonos One has a sound that’s rich and up front. Depending on the type of music you listen to, you may prefer the wall of sound that the Sonos One outputs, as opposed to the more discrete, nuanced one found on the Studio.

Turn up the volume to fill a large space, and it’s no contest though. The bass on the Echo Studio is outstanding.

I tested the gamut of music. My tastes probably as eclectic as you’ll find. First, a heavy dose of obscure Canadian new wave from the 1980s. Then some classical. Jazz. Pop metal. Ambient. And even some Taylor Swift and, of course, Billie Eilish. Variety is truly the spice of life. On sophisticated arrangements, with lots of padding, say, or a variety of instruments, I give the nod to the Echo Studio where the separation in the middle felt cleaner. Still, I felt typical pop and new wave had more impact on the Sonos One — comparatively distant on the Echo Studio unless I turned up volume. It really is a preference thing. Both are great, but deliver sound in different ways.

After spending months of daily listening on the Echo Studio I’ve come to absolutely love it. Sure, at $199 USD it’s pricey compared to a standard Echo, but I believe the justification is there if you want more than just a regular Alexa-enabled speaker, one that can deliver a more than decent listening experience without having to go the dedicated hi-fi and separate speakers route. 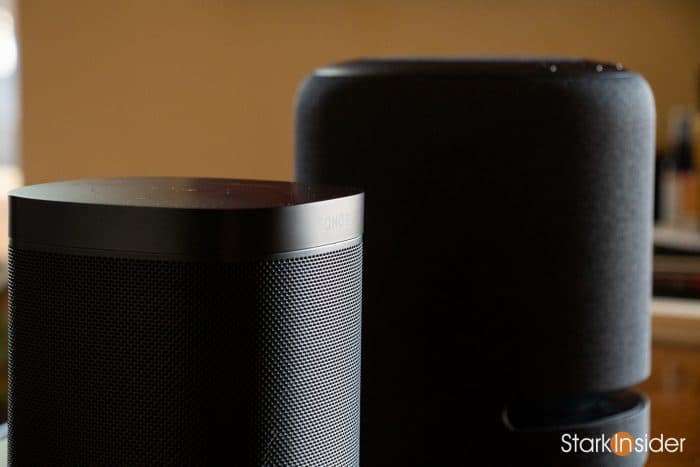 I’m saddened to leave the Sonos ecosystem. Sonos was a ground-breaking product for music fans. There’s so much too love. Yet, here we are in a voice-activated world, with machine learning and the friendly-as-ever smart home that it’s hard not to be wowed by what Amazon is doing with its speaker line-up. 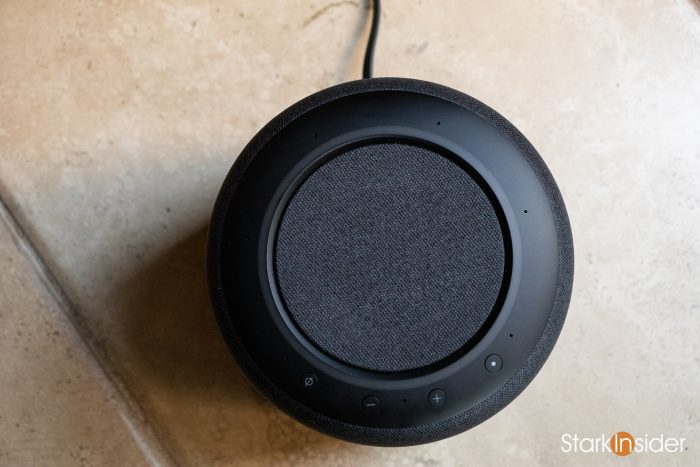 I’d likely be perfectly fine living in the office with a Sonos One. But if you’re like me and the rest of your home is based on Echo devices, than it’s hard to justify the red-headed step-child. With the Echo Studio I get to enjoy multi-room music groups and use it like any other Echo speaker around the home, with all the convenience that affords.

If you’re a fan of music and don’t want to break the bank in the search for sound quality that is a step up from a standard Echo speaker, it’s hard to beat the Amazon Echo Studio. Highly recommended.