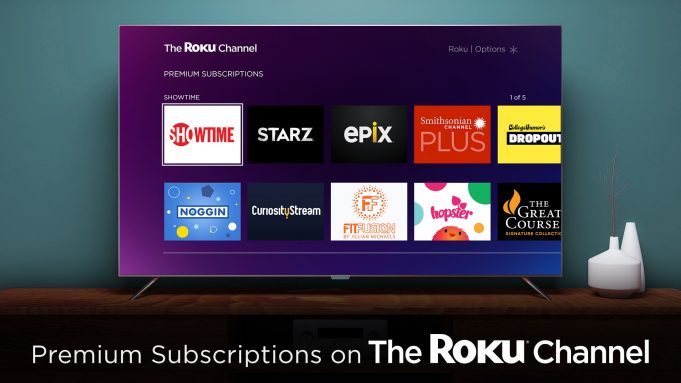 Roku today announced it was expanding its Roku Channel to include premium subscriptions. Users will be able to add over 25 subscriptions including providers such as Showtime, Starz, and Epix.

Ad-supported titles will continue to be available through Roku devices, and the iOS and Android apps.

Free trials (seven days) are also available for those who want to try out premium subscriptions.

Roku says it expects to roll-out the premium subscriptions, along with updated search capabilities to “select” Roku devices later this month, with a phased roll-out planned for early 2019.

Given the immense success of Netflix and its free streaming of Taylor Swift’s Reputation concert on New Year’s Eve, it will be interesting to see how streaming services continue to evolve their strategies in 2019.

Competition for content is fierce, with Amazon Studios (Prime) and Netflix allocating massive funding for original content. Other players have sizable user bases as well including Hulu, Vudu (Walmart), Sling TV, Google Play Movies, Crackle, iTunes, HBO Go. And, of course, there’s YouTube and Google’s premium version YouTube Red that will no doubt continue to expand and promote its own subscription services.

It will be interesting to see if consolidation in this space happens anytime soon.

In cable and satellite there was traditionally only room for a few key players. Likely that had to do with scale and defraying expensive infrastructure across as large a customer base as possible. Those costs of yesterday, however, are less an issue given the internet and relatively low cost content distribution platforms made available by tech titans, namely Google (Google Cloud Platform) and Amazon (Amazon Web Services).

While consumers generally prefer choice, and in my estimation would not like to see streaming services consolidate to near monopoly-like status as we saw with telecom in the 1990s, there’s also the convenience factor to consider. One of the problems with the state of streaming in 2019 is that in order for us to get access to all our favorite content typically requires subscribing to multiple services. Over time, expenses can add up, and so too tracking all the apps and userids/passwords, etc. It becomes a bit of a pain.

Roku looks to be attempting to round out its content portfolio by adding more channels. I wouldn’t be surprised if this is a trend that continues throughout the next few years as vendors bolster their offerings in a bid to make it easier for consumers looking for a one-stop shop of streaming content.