Hard to believe that Apple is the most valuable company in the world. 1 Trillion dollars market capitalization. I wonder, what would Dr. Evil think?

In more recent times it’s easy to regard Apple as the titan of tech that it is — especially when it single-handedly created the app economy with the unfurling of the ground-breaking iPhone in 2007.

I remember Apple as the underdog.

In 1984 Steve Jobs and team were also rebels. Of course, there was the famous Super Bowl ad. And the constant poking in the eye of its much larger, corporate competitor, Microsoft.

For me, it was all about the Apple ][. Hooking it up to a dodgy color TV in the family room with some an also (very) dodgy composite adapter. Then. Then we could play pong! Run Pascal the computer programming language. Or drive around a little turtle using something called Logo. There was Wizardry. Dan Bicklin’s incredible Visicalc. Purple floppy discs made by Verbatim (a shoe box made for a perfect storage box). Optional printer cards and memory expansion. Dot matrix printers. And joysticks that looked oddly like they were from Thunderball.

Maybe best of all, with the Apple ][ was that when you booted it up all you got was something like this: 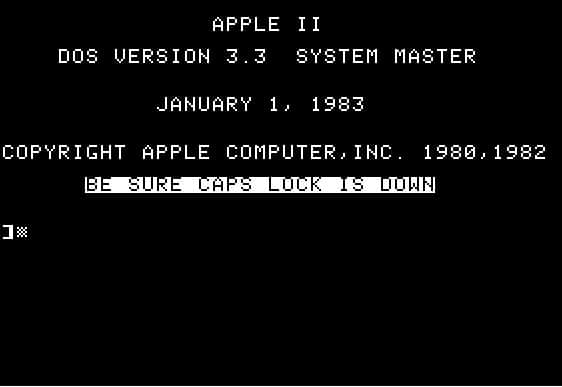 Innocent hello. Just say no to the cloud.

No logo or fancy boot screen. Also no programs or apps or anything. If you didn’t have a disk you pilfered from a friend, well then, program it yourself already! Either that, or stare at a blinking cursor the rest of the afternoon.

By 1985-85, the Mac and its astonishing mouse-based user interface began to steal the underdog’s thunder. Mac employees were pirates. The revolution was starting. Poor Apple ][.

For me, though, it was that incredible design by Steve Wozniak (hardware) that created something so pure, so fun. It was also the Apple ][ that brought us tech nights. Out into the cold (if you lived in Ottawa back then), and into libraries, dark university lecture halls, cozy community centers. There we would share our love for all things Apple. Maybe swap some floppies. Teach other a new trick or two – like how to print using PR#6 from BASIC. Wow.

Interestingly, in this pre-internet era, I can also credit the Apple ][ with getting me to read more. Since programs were scarce, for the most part if you wanted to do something you had to program it yourself. That led to learning various programming languages and loading up on how-to books. I don’t use Pascal or Logo or Visicalc or BASIC in my everyday life, even though I do live in Silicon Valley, but I’m quite certain those experiences, and deep dives down logic rabbit holes were some how useful in forming some part of my brain, or at least that’s my theory.

Then there was the turmoil. After Steve Jobs was unceremoniously dumped, CEOs came and went. Wonderful saga. Again, good reading. Look for some books on the history of Apple and those late 80s, early 90s years were full of all sorts of crazy up-and-downs. Not to mention, near bankruptcy. I remember when Jobs triumphantly returned to Apple, he cut all the extraneous products, and narrowed focus into four quadrants. I can’t remember what they were — likely the Apple, and Mac occupied two of the four squares. But it was the simplicity of thought. That focus. And that ease of distilling market complexity into as non-corporate of a strategy if there ever was one, that would define the beginning of the boom.

Jobs would also make another brilliant move (among many), in making Tim Cook his successor. There were mistakes too. Plenty. Remember Lisa or the Apple III? Probably not. Regardless, innovation and constant flow of ideas was the order of the day, and that appears to be the case now in 2018.

1 Trillion dollars. Of course, that market value, may (and will) likely rise, fall, before rising again. Either way, Apple is no longer the underdog; and hasn’t been in recent times that’s for sure. Like Bill Madison (played by a superb Bill Pullman) in David Lynch’s Lost Highway (1997), I like to remember things my own way. Apple. The eternal underdog.