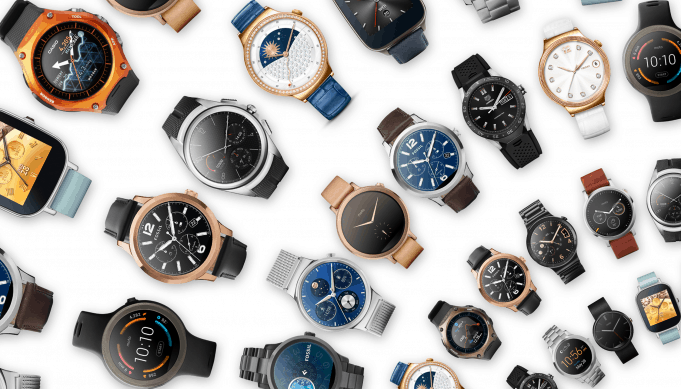 Google is putting the finishing touches on its first major update to Android Wear, the smartwatch operating system that debuted over two years ago.

Wear 2.0 is expected to ship later this year, and, along with it, I’m expecting will see a bevy of new watches running it. There’s a lot of tweaking in the update. A lot of that has to do with the user interface and experience.

But is it really a major step forward? And, more importantly, will it be enough to bite into smartwatch market leader Apple, and fitness tracker leaders FitBit and Garmin?

Since the I/O conference and the Wear 2.0 preview, I’ve been sifting through the Wear developer site, reviewing docs, checking out preview images of the UI updates, and watching videos (and, of course the actual I/O Wear 2.0 presentation). I don’t have a Huawei Watch or LG Urbane LTE — the only two watches that can be flashed with Wear 2.0 — so I’ve not yet been able to actually test a live, running version of 2.0, but hope to soon. As an aside, Google does a fantastic job of documenting Wear design guidelines and principals. Definitely worth pursuing, even for non-developers such as myself.

Meanwhile, here are some initial (and very casual) impressions of the upcoming Wear 2.0 smartwatch OS.

Wear 2.0 is not a major update, think UI overhaul

With Wear 2.0, apps will be able to access the internet without a smartphone connection. There’s a (ridiculous, microscopic) keyboard for tapping out text responses, and automatic detection of fitness activities. Despite the 2.0 version jump, consider those incremental improvements.

It would seem most of Google’s efforts went into streamlining the user interface. Whether that’s will be a success with 2.0 time will tell. Based on the preview, though, I’m not yet convinced.

A vertical swiping metaphor replaces a combination of left/right swipes: 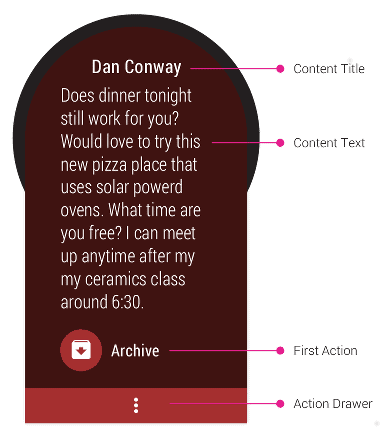 Instead, now you can swipe up to the top, for instance, to reveal a navigation drawer where you can navigate between app views, and you can also swipe to the bottom to see an action drawer. In the context of a messaging app, for example, you’d see a stream of, say, Hangout messages. Swipe to the top where you might compose a new message, or swipe across to other apps. Or, swipe to the bottom to take action on that particular message (Reply, Add photo, Share location, etc.). Seems decent enough.

But, that back button seems an odd design choice

For all the swiping and tapping we do on our Wear smartwatches, it seems odd, then, that Google would incorporate a physical back button in 2.0. My guess is Google is seeing how Apple incorporated a crown and button in its Watch design and feels compelled to offer something similar. The combination of swiping, and now the need to push the back button might be, really, a pain in practice.

Darker theme and app colors: a step in the right direction 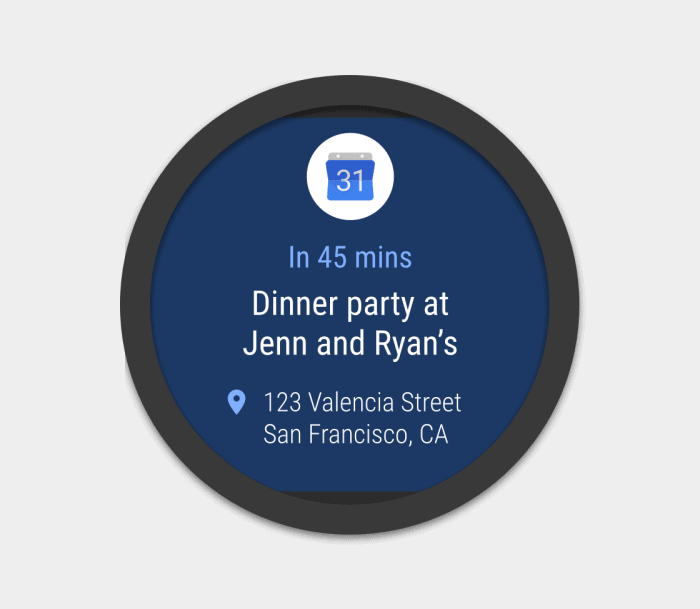 One thing I love about Samsung’s Gear S2 — aside from its striking, contrast-rich AMOLED display — is that the Tizen OS favors a dark background. White text, and colorful icons are tremendously bright and punchy. And punchy is good, right? Especially on a tiny little screen on our wrist.

Wear 2.0 is heading a similar direction. Based on what I’m seeing with the preview, the white dominant look of Android Wear will be replaced by a darker theme, one that assigns a palette of colors based on the app in question. There are 20 dark color palettes available for Wear 2.0. Purple example:

Hangouts, for example, would be green, Gmail, shades of red. And so on. The Wear 2.0 API takes care of the various shades, and has rainbows of sorts already defined depending on a given app’s primary color (74% brightness). What this means is instead of generic black text on a white background, you’ll now get (a more eye-pleasing in my estimation) white text on a darker app-specific background color.

Here you can see Android Wear 1.x (left) with white design, and the updated 2.0 color scheme:

One additional benefit of this updated color scheme could very well be battery life. White typically requires the most power drawer. We will see if this turns out true — if so, it expect it to be very minor.

Complications API will enrich Wear watchfaces for the better

Us Wear users have long been able to load-up third party faces (Watchmaker is superb for that). I especially like the ones that incorporate all sorts of data right into the face itself — steps, weather, battery life, calendar, notifications. Very handy. Up until now, though, this required some heavy lifting on behalf of developers. With the Complications API, displaying extra info, and being able to customize its location and content, will be much easier. 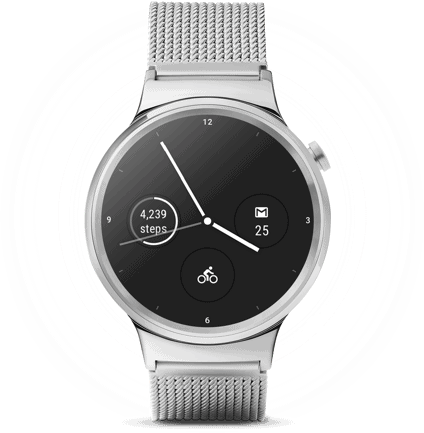 Net-net: this is another step to counter what we’ve already seen with Apple and WatchOS: an easy way to customize watchfaces, making them more useful at a glance.

And that’s about it…

There’s not a whole lot more to talk about when it comes to Wear 2.0. To my eyes, it still feels very much firstgen.

Some things I think Google really needs to improve with 2.0 that I’ve yet to see:

The world, chico, and everything in it.

Okay, yes, we — I — am being a little overzealous with my Wear 2.0 (and beyond) wish list. Clearly, we’re in the early days. Marketers are feeling their way, trying to determine where this thing is headed. Everything we’ve seen so far tells us that smartwatches are a niche opportunity — they’re not about to bust open a new segment anytime soon like the Mac, iPhone, or iPad. Instead I expect them to eventually become ~ $99 (USD) accessories. Luxury buys? Not so sure about that, though many buyers will value style so we should continue to see fancy bands and watch casings.

At the end of the day, I’d score the smartwatch usability index like this:

#3. Google Android Wear — too much focus on nerd stuff (ridiculous, microscopic keyboard and speaker) and not enough focus on what buyers really want.

Wear 2.0 is an opportunity for Google to reboot. I like a lot of what I’m seeing, especially the updated vertical navigation scheme with action drawers and the app-specific dark backgrounds. But, I fear sometimes Google loves its moonshots too much, and overlooks the smaller (more mundane) things like: reliable connectivity, apps that don’t crash, and a simple notification that doesn’t require a PhD to decipher. Hopefully those things will come. For now, Wear 2.0 looks like a minor update. It would appear the wearable experience we’re all hoping for is at least 2-3 years away. No bother to smartwatch geeks like me. Pebble one day. Tizen the next. Wear after that. But… always back to Pebble Time Steel… for now.