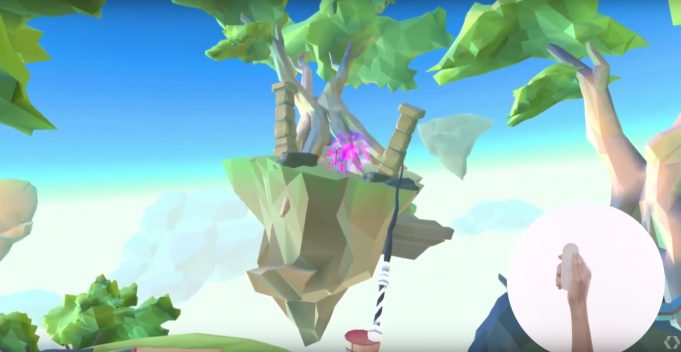 “Mobile. Approachable. For everyone.”

Google’s evolution of its clever VR project Cardboard is here. Well almost. Clay Bavor’s reveal of “Daydream” was easily the best highlight so far at Google I/O here at Shoreline in Mountain View.

Once again, Google is keeping it simple, and I think that’s a smart idea.

Daydream is a combination of hardware, software, and apps. This time, though, there’s a controller. Looking very much like an Apple or Fire TV remote, and featuring just two buttons and what looks to be a touch-pad at the top, it allows the user to interact with virtual environments. For example, pull your arm back and then thrust it forward to launch items at targets in games. Or, perhaps, flip some pancakes on a beach as was previewed on stage. In the demo at I/O it looked almost as if Nintendo had participated in the design. It’s a simple, welcoming approach that appears far less intimidating than other VR rigs currently dominating headlines.

Bavor says Daydream is part of Android N, and will ship this fall. No word yet on price, but I expect it to be far less expensive than the competition.

“Ultimately, it’s about what you can experience,” Bavor, Google’s head of engineering for VR, said during the presentation. Bingo.

What I like about Google’s approach here is that it leaves the big guns like Facebook’s Oculus (Rift) and HTC (Vive) to battle it out at the high end — targeting hardcore gamers and those willing to drop $600+ on a headset and buy a high-powered PC to drive the system. Meanwhile, like it did with Cardboard, Google seems more interested in making its approach to VR, indeed, approachable.

Android N will feature something called “VR Mode,” according to Bavor. Google focused heavily  on performance and low latency.

As expected, most, if not all, of Google’s partners will be on board come fall, and offer Daydream-Ready smartphones including as mentioned today at I/O: Samsung, HTC, LG, Mi, Huawei, ZTE, Asus and Alcatel.

I’m not so sure VR, at least the pricey, complex kind, will be embraced by the mainstream. At this point I suspect it will remain a niche embraced by some hardcore gamers.

But for the everyday, casual user who wants to play around with VR from time to time — to play a simple game, to watch a movie on a huge IMAX-like screen, or to, even, as was shown today, hang out with astronauts — the Daydream platform looks compelling.