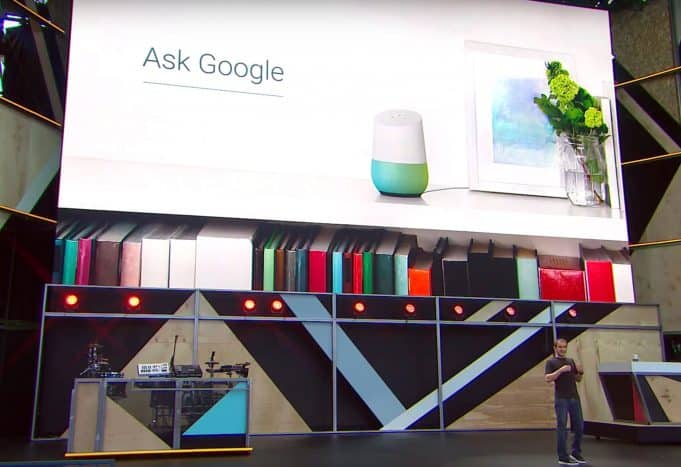 As has been widely reported today, Google unveiled its answer to Amazon Echo.

It’s called Google Home. And like Echo (and it’s smaller sibling Tap), it’s a small plastic cylinder — a smart speaker — that sits in your home, and responds to voice commands. You can book movie tickets, check on the status of an order, get weather reports, play music, and so on. All very much similar to what we’ve seen from Bezos’ mind-controlling, privacy destroying Echo division.

Amazon wants to wire our homes directly to its revenue stream.

No surprise, Google does too.

The difference is, of course, reflects the fundamental approaches to their respective business models.

Amazon is all about transactions. So it released “Dash” buttons. You place them around the home, and can instantly place orders for household goods — paper towels, laundry detergent — at the point of use. At one touch, an order is placed. Your home in a sense has become a retail space. Likewise with its Echo assistant. Not only is it ostensibly providing useful information to a family without the need to pull out a phone, it’s continually monitoring your queries and providing real-time demand information back to Seattle HQ. Slightly frightening. But this scenario has become the somewhat scary new norm, it’s part-and-parcel of the era of frictionless data (i.e. the disintegration of privacy).

Google is all about ad revenue. As we all know all too well, Google apps and services are, for the most part, free. But, not really free. All roads lead to ads. Google Search is the most famous example. Now, with Google Home, it too can attempt to gain a foothold into the very heart of our living rooms.

Nothing I saw on the massive stage at Shoreline today at I/O during Sundar Pichai’s keynote was mind-blowing. Maybe that’s a good thing. A few years back, the Sergey Brin demo of Google Glass and the skydivers and the mountain bikers was mind-blowing. And we all know how that turned out.

Much like how Microsoft and Sony (and Nintendo) have arm-wrestled for control of our living room via video game consoles, Google and Amazon and Apple are embarking down a similiar path.

Given we can already do everything, via voice, using our smartphones (and smartwatches too!) do we really need another device to basically perform a redundant task?

But Google and Amazon want us to need them.

Because wiring our homes to their profit centers is the new holy mission.