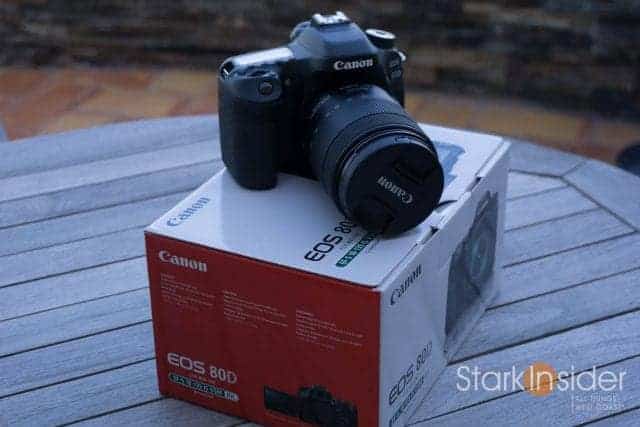 Now that the Canon EOS 80D DSLR camera is here, it’s time to take stock of some of the good, as well as some of the bad.

I primarily shoot video, and have been using the 80D for a few months now. So far I’ve used it to shoot interviews, b-roll, some landscape video, and some miscellaneous shots where the Dual Pixel AF enables me to pull off an otherwise impossible (at least as a solo shooter) rack focus shots — to me, this is the 80D’s real magic sauce.

Coming from years of shooting Canon DSLR — Rebel T2i, EOS 60D, 70D, and now 80D — for Stark Insider videos and I’m well-versed in its operation, and appreciate that Canon sticks with a tried-and-true formula and doesn’t completely reinvent the wheel each time.

As you might expect, upgrades are usually evolutionary, rather than moonshots. Much like Porsche has done with the 911, the body remains much the same with each iteration. Yes, there’s minor variation in control layouts, and materials (especially between the pro range such as the 1D and 5D and the prosumer/consumer models), but if you’re a Canon shooter, you know that it only takes a few minutes to feel right at home with just about any DSLR the company makes. Same was true for me when I first picked up the 80D. There was virtually zero learning curve. In my books, at least, that counts for something.

Right then, let’s take a quick look at some of the good and the bad of the Canon EOS 80D. Again, please keep in mind, I’m a video guy so most of my time (over 95%) with the camera is spent shooting Stark Insider videos in and around the San Francisco area.

Granted these aren’t your typical camera test videos, rather these are examples of a few cases where I’ve used the Canon EOS 80D for a Stark Insider shoot.

Because I shoot primarily with a Canon C100 II now, I use the 80D (as I did the 70D as a b-cam). Also, when I like to be more discrete nothing beats a Canon (or compact mirrorless) body for blending in with crowds.

The Art of Swordplay

Soon I’ll be heading to Vancouver, Canada where I’ll be using the Canon EOS 80D exclusively on a shoot. I can’t wait to see how it turns out, and to share the results here on Stark Insider.

Canon has taken what the strengths of the 70D — namely auto-focus, ease-of-use, image quality and handling — and further amplified them for the 80D. Sure, the 80D might not necessarily “go to 11” and could very well lose a spec war with several competitors on paper.

But cameras live in the real world.

And they must perform without hesitation and provide the shooter the best opportunity to capture the moment.

Or, in other words, the sooner the camera, aka the tool, disappears and reduces technical barriers between us and our subject matter, the sooner we can apply our creative energy to the most important thing: story-telling.