BottleRock organizers have announced that the Red Hot Chili Peppers, Stevie Wonder, and Florence+The Machine will headline this year’s edition which takes place May 27-29, 2016 at the Napa Valley Expo.

“We’re incredibly excited about our all-star lineup and what we have in store this year,” said Dave Graham, CEO of BottleRock Napa Valley and Latitude 38 Entertainment. “Our festival and foodie enthusiasts have come to expect a certain level of quality and entertainment from BottleRock and each year, we strive to make the event even better than the last. This year’s festival promises even more world class music and more of what makes the Napa Valley so legendary.”

Other acts scheduled to take to one of the several stages on the grounds in downtown Napa include: The Lumineers, Death Cab for Cutie, Lenny Kravitz, Walk the Moon, Rodrigo Y Gabriela, Ziggy Marley and Grouplove.

Last year, BottleRock returned to form after a few financial missteps, and logistical issues which created a less than ideal concert-going experience. According to Clinton Stark in his review on Stark Insider, “it was epic, it was memorable, and it was a major comeback.”

Andrew McMahon in the Wilderness, who was seen recently in Napa at the Live in the Vineyard music festival, is also among scores of acts set to perform. Other LITV alum making BottleRock appearances in 2016 include MisterWives, and Greg Holden.

Also See: The Re-Birth of BottleRock – No Doubt About It This Time

On the local front, look for the Silverado Pickups and the Napa Valley Youth Symphony to make appearances, among several others.

As in past years, BottleRock will once again feature local food, wines, and craft beers, in addition to world-class muralists and sculptural artists who will bring to life “one-of-a-kind” installations.

Be sure to subscribe to the Stark Insider YouTube channel for the latest in indie film, West Coast music, and the occasional dose of wanderlust. 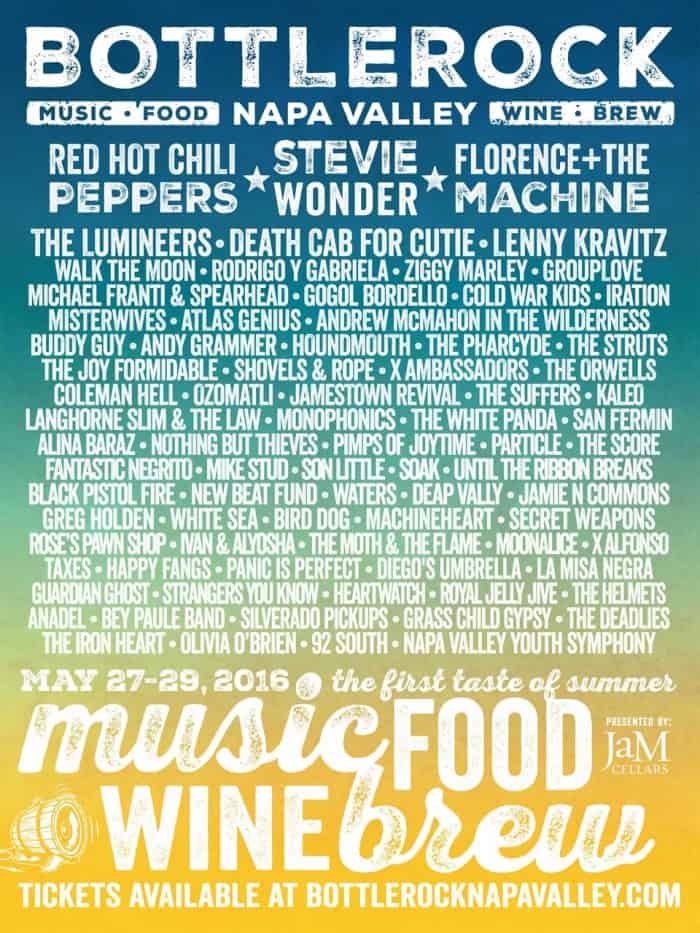 Complete list of acts scheduled to perform at BottleRock 2016