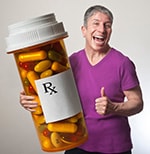 This is My Brain on Drugs

Don’t let the title This is my Brain on Drugs make you jump to conclusions. This one-woman show by Gloria Bromberg, which just opened as part of San Francisco’s ongoing Fringe Festival, isn’t about  tedious ‘60’s psychedelic war stories.

Bromberg talks about her progression from 7-year-old existentialist to alcoholic to antidepressant junkie, and her life beyond, with the main focus on those sanctioned pharmaceutical balms (Effexor, Wellbutrin, Paxil, etc.) that a startling number of us use to shape our experience of the world… and the world’s of us.

This one-woman show, directed by Mark Kenward (whose work at the Marsh drew wows last year) has numerous failings. Too confessional by half, it lacks dynamic tension. However, these failings aren’t what will nag at you later – and focusing on them too closely would be dissing the Fringe, whose spirit of “NO RISK, NO ART / NO ART, NO RISK” animates the best of these ventures.

Bromberg’s honesty was what nagged at my mind afterwards, especially as the symptoms that she described plaguing her five years after first opening  Pandora’s pharmacopoeia were similar to those described recently by a friend.

While Bromberg’s material needs work, her acting chops are surprisingly good. You won’t remember the small gaffes, but instead might be awed at the bravery of this unseasoned performer.