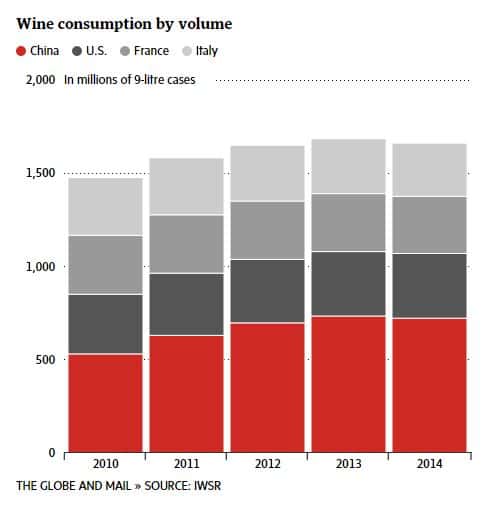 Wine is as popular as ever in the United States. But consumption here pales in comparison to the world’s leading wine consuming nation: China.

According to UK-based IWSR, wine consumption in China increased 36% between 2010 and 2014. That amounts to just under 12% constant annual growth rate. Canada, the second fastest growing, trailed significantly at just over 2% CAGR.

In 2014, twice as much wine was consumed in China as compared to the U.S.

This of course is not entirely new news. China’s middle class has exploded in recent years, and, along with it, a taste for luxury goods, including fine spirits, and wine. Last year, land allocated to vineyards grew to 1.9 million acres, even putting it in front of France (but behind leader Spain). And reports are suggesting that domestic wine production in China is now producing wines that are have gone “from bad to good.”

Source: “Top Chinese Wines Have Gone From Bad to Good. Will They Become Great?” (Bloomberg)

There are well documented concerns that the Chinese economy is slowing. Could that too impact non-discretionary spending among the bourgeoisie? Time will tell of course. Given the size of its population and that wine is still a relatively young consumer trend, there are likely still plenty of opportunities, both for the emerging domestic producers, and exporters abroad (France is the number one importer to China).

ALSO SEE: China may soon be the world’s biggest producer of wine. In his father’s hometown, a prominent architect — and unlikely winemaker — sees a new Napa.

According to IWSR the outlook in China remains “strong”, at least in the long term.