He made and lost tens of millions as a director, even declaring bankruptcy in the process. Famed André Tchelistcheff was the first winemaker (1977) he hired. And, of all his films, it was Dracula that represented a financial turning point, providing the foundation for a re-capitalization that would result in the resurrection of Inglenook.

Just three interesting things I learned about the man, the living legend, the greatest filmmaker of all-time: Francis Ford Coppola.

Wine Spectator’s latest issue (June 15, 2015) features a cover story about Coppola and the Inglenook estate. James Laube recounts 40 years of history, the booms and the busts of a fascinating career, and paints a picture of a man who apparently embodies the very definition of perseverance. If you enjoy film history, wine history, or–better still–both, this is a must read. 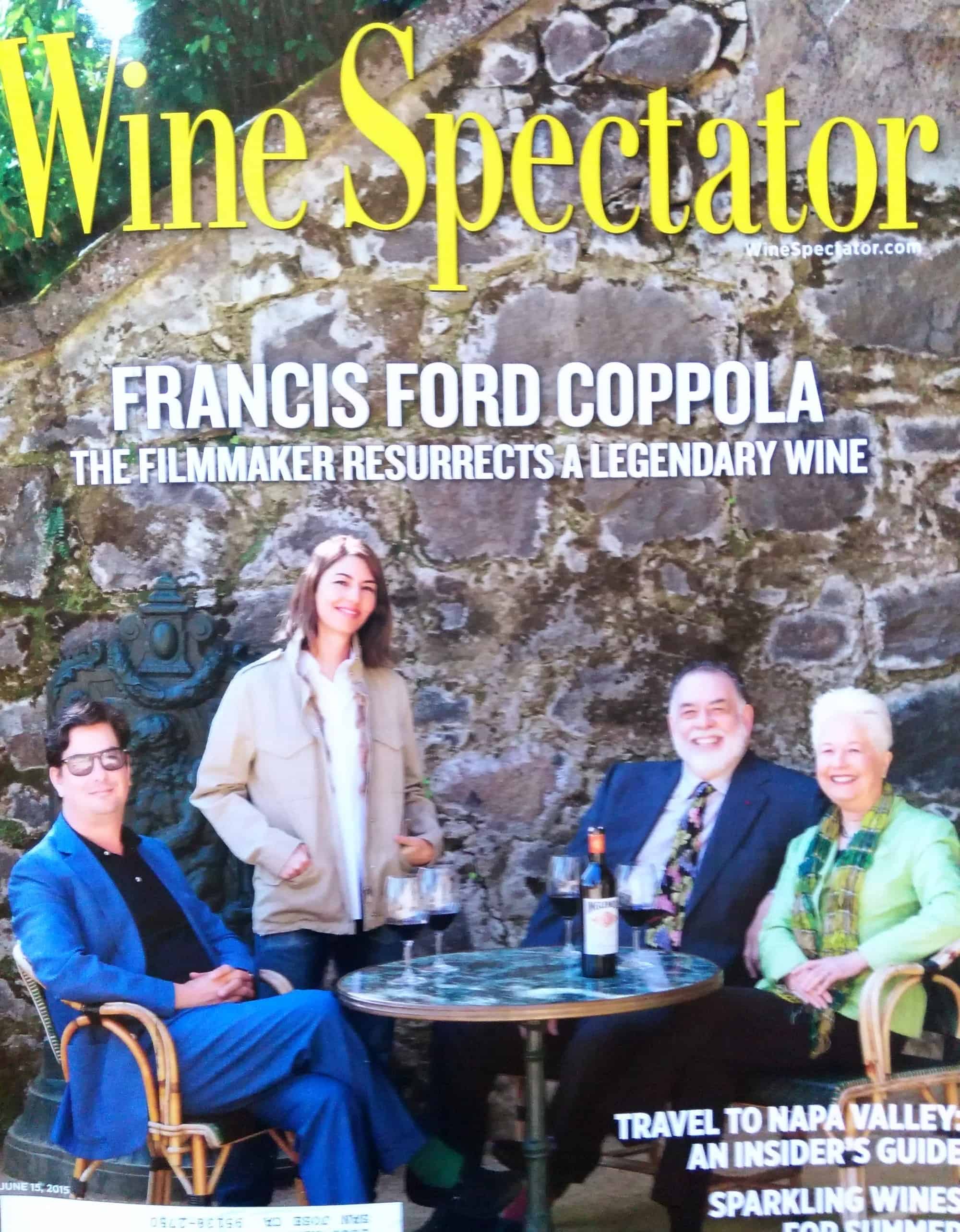 The 70’s are among my favorite eras for cinema. You had Polanski coming out of his arthouse 60’s phase, with a mainstream breakthrough in Chinatown (1974) in addition to, well, more arthouse greatness such as The Tenant (1976). A young New Yorker, Martin Scorsese, was making waves with gritty gems like Mean Streets (1972) and Taxi Driver (1976). Spielberg’s talent was front and center in the remarkable Jaws (1975). But, above all, you had the towering cinematic achievement that was The Godfather (1972) and, amazingly, a sequel that lived up to, or maybe (maybe) even surpassed the original. I hope it was somewhat understandable that when I briefly met the larger-than-life figure at his Coppola estate a few years back in Napa during a trade tasting I was somewhat star struck. To the younger set, I’d say that Coppola is to film as Taylor Swift is to music. You just don’t get any bigger. For the rest of us Coppola is cinema.

In the WS article there’s a photo of Coppola on set. He’s flanked by James Caan and Marlon Brando, and on his left Al Pacino (looking military prep school-ish) and John Cazale. The shot gives me goosebumps. Interestingly, only Coppola is smiling. The rest — game faces. The mob (maybe like winemaking?) sounds like glitz and glamour, but we all know it can be a serious, maybe even at times boring business.

Another surprise: Apocalypse Now (1979) opened to “mixed” reviews. Blade Runner (1982) comes to mind. Perhaps, the audience at the time was expecting something else–respectively, a traditional Vietnam war movie, and Star Wars-like sci-fi escapism. Like a fine wine, just give them time.

Some of the wine scores are more akin to Twixt than, say, The Conversation.

On the surface it seems pretty simple. Coppola’s a legendary filmmaker. He’s made great movies. He’s made a tonne of money. Dig deeper as Laube does here, and you realize nothing is ever that easy, that simple. Whether you’re a Coppola or not.

If he, of all people, can go broke trying to fulfill his dreams in Napa, then what hope do the rest of us have? There’s a popular saying. How do you make a small fortune in the wine business? (beat… beat…) Start with a large fortune. So true, it would seem.

Interesting how his daughter Sofia and grand-daughter Gia would try their hand at the family craft. I especially like that you can see that 70’s aesthetic in some of their work. Lost in Translation (2003) is as internal, melancholy a film you’ll ever see — similar to the themes of isolation and societal disconnect that we saw on the big screen decades earlier. Palo Alto (2013), Gia Coppola’s debut, is a gritty account of reckless, lost youth. It was my second brush with the Coppolas, when we had the good fortune to interview her for Stark Insider when the publicity circuit hit San Francisco. I was struck by her humble disposition, and quietly amused when she referred to her grand-father as “poppa.”

As I’m reading the Spectator piece, I turn the page (yes, I actually read, on this very rare occasion, a physical, hard copy of WS… something about that large format that draws you in, no?). Who should appear? Vineyard gladiator, bachelor himself Karl Wente of Wente vineyards in Livermore, located about 30 minutes north of Silicon Valley. I’m Karl Wente. These are grapes. What are you gonna do about it… 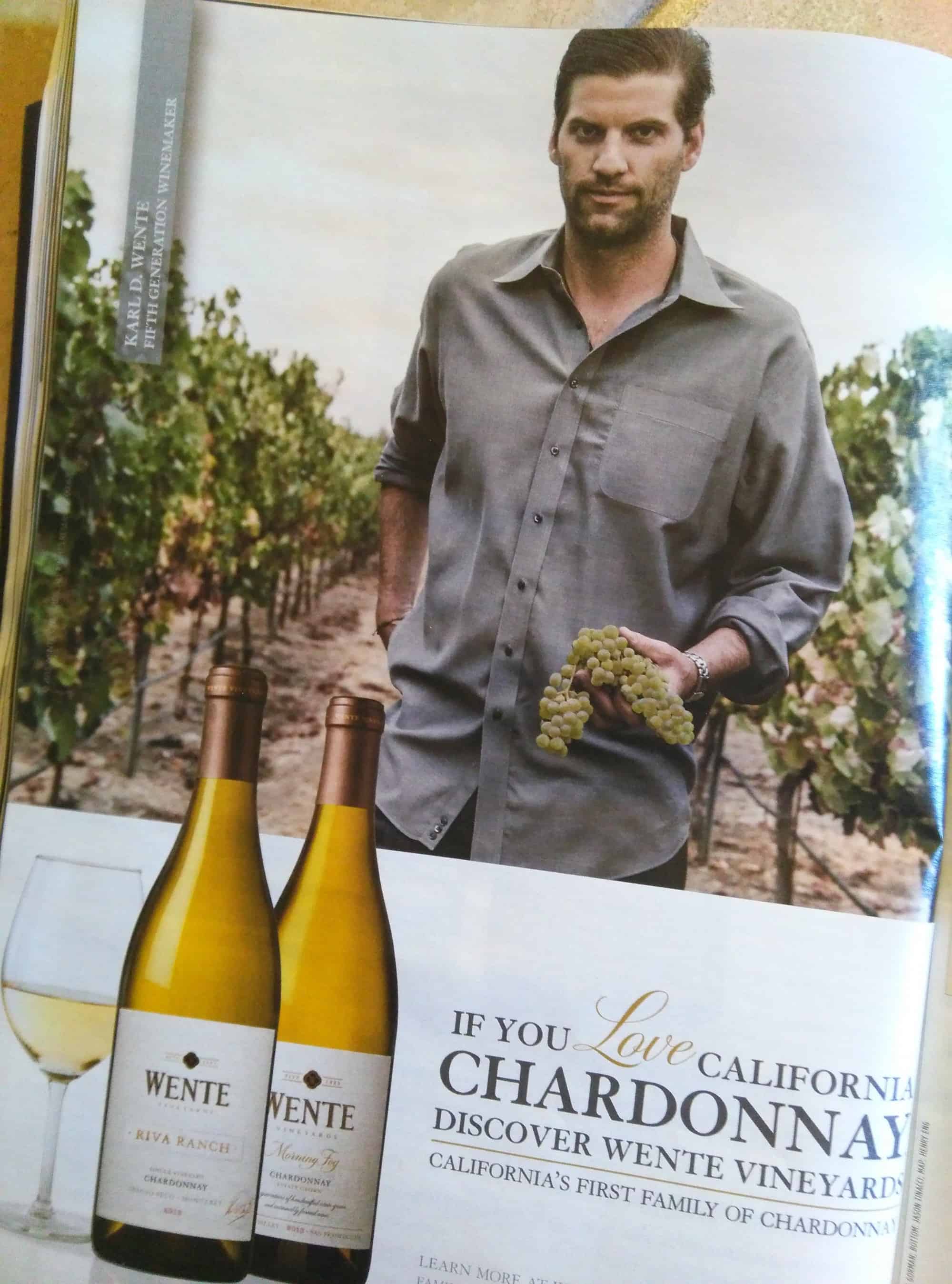 For those wondering, yes, they do review Coppola’s wines in this issue. For anyone pushing pay-to-play theories, I suggest you take a look. Some of the scores are more akin to Twixt than, say, The Conversation.

If there’s one person who knows you can’t win them all, I’m guessing it would be Coppola himself. “You learn to never give up,” he says. Inspiring words from the Master.