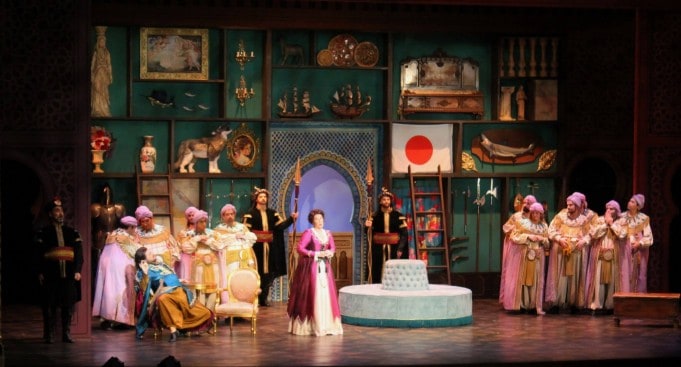 The Italian Girl in Algiers

Pre-music lectures are often sad affairs. Information might not be informative – and all too often, the speaker’s presentation skills are hardly dynamic. Such is not the case when Opera San Jose’s general director, Larry Hancock, speaks pre-show to the crowd. A congenial fount of information, Hancock knows his audience and how to wow them. However, I do have one small nit to pick: he suggested that the second act of Rossini’s The Italian Girl in Algiers might be a wee bit less entrancing than the first. He was wrong. No ice cream arias* here. You won’t want to miss a single minute of either act.

This opera buffa does have a strong first act whose dramatic climax will have you trying not to roll on the floor with laughter, which is why it’s referred to as a dramma giocoso – a work whose climax often ends with the first act. That said, the talents of the principals are such that you’ll be eager for intermission to end so you can get back to the show.

This opera works so well because of the talented principals. The last time I was lucky enough to catch mezzo-soprano Lisa Chavez was in Opera San Jose’s Madame Butterfly, and before that in Opera Paralléle’s Trouble in Tahiti and A Hand of Bridge. She commanded the stage then – and has only gotten better. Here she plays the delightful Isabella, a difficult role by anyone measure. Chavez is as in control of her performance as Isabella is with every other singer in the show.

The success isn’t all about Chavez; it’s shared with Bass Nathan Stark, who sang the role of Mustafa. I confess to being worried during the first few minutes of his performance, when his voice was drowned out by the orchestra. However, this quickly disappeared. Stark’s acting chops absolutely made this performance – especially the end of the first act of which Hancock spoke so highly.

Also noteworthy was Michael Dailey as Lindoro. Although the strength of his voice was not entirely apparent in this performance, his voice has a delicious depth that makes me want to keep an eye on him.

As it’s approaching Thanksgiving, gratitude is top on my list – especially for Opera San Jose. This 30 year old company – whose finances should be the envy of many artistic enterprises in the valley – continues to pump out one excellent production after another. For that, we can all raise a glass.

* The phrase “ice cream aria” appeared during the Baroque; it indicates a lesser aria during a long performance during which audience members might be inclined to step out for refreshment.