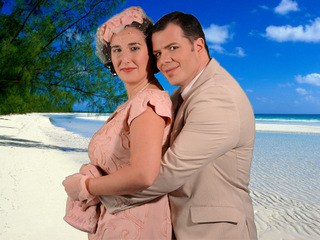 Some works linger around the edges of your consciousness days after the show closes.  The energy continues to pulsate, the issues seek resolution, and ultimately, only the memory remains. That such an impact could be made by a plot about quarreling couples – subject matter that is uncomfortable at best and boring at worst – speaks to the strength of the work itself and the extraordinary talents of those bringing it to life.

Opera Paralléle’s take on Samuel Barber’s “A Hand of Bridge” and Leonard Bernstein’s “Trouble in Tahiti” is one such production. Billed as “where Madmen meets opera,” the two works remain edgy and vital 60 years after they were written.

“A Hand of Bridge” takes on the internal monologues of two suburban couples playing cards. Bill (Andrew Ramirez) indulges in sweeping, harmonious raptures of Cymbaline and other fantasy mistresses. David (Eugene Brancoveanu) sings of “20 naked boys, 20 naked girls, attending to my pleasures,” and great wealth (“if I were rich as Morgan”). Geraldine (Lisa Chavez) pines “do not die mother” and laments her unsatisfactory relationship with her deceased mother. Sally, obsessively repeats “I want buy that hat of peacock feathers” with a dementedly narcissistic atonal intensity. The disjointed arias of each are connected by a smoky jazz riff that accompanies the bidding of the players and the playing of the game.

The entire piece was repeated again in the lobby after this show.  Given that so much was happening in this short piece, the repeated performance was greatly appreciated.

“Trouble in Tahiti” takes on similar material. The edgy intensity that Brancoveanu brought to Orphée two years ago has grown exponentially with the passage of time, bursting forth to bring an explosive Sam, priapically strutting the stage. Lisa Chavez is slightly less familiar, if only because the last time we saw her, she was wearing the trousers in Ainadamar.  Here, the unresolved tension of her character Dinah, is captured in every tremor of her voice.

The parallels to “Madmen” and the uneasy tensions of suburban life were brought home with effective use of video across two screens, one largely used to display period advertisements whose irony is ever more apparent with the passage of time, and another, in which tiny houses fell slowly through the sky, until by very end of the opera, a suburban tract development had been created.

Musically, the score in pure Bernstein, with melodic and rhythmic passages that point the way to melodies appearing a handful of years later West Side Story. For example, the Act V aria, in which Sam sings about other men  (“they never will win”) sounds vaguely like “A Boy like That.”  Likewise, the wistfulness of Scene IV in which Sam and Dinah accidentally run into each other, and make excuses so that they don’t have to talk sounds vaguely like “There’s a Place for Us.” This isn’t to suggest that “Trouble in Tahiti” is a less mature work – which is hardly the case.  All the elements that make the music of West Side Story are at work here.

Watching Brancoveanu and Chavez pull off the conversations between Sam and Dinah was a delight.  Musically, these are complex scenes, as each response slightly overlaps the other, almost always in separate melody lines. This underscores the tension between the two, energizing the dialogue. Thus, even though the plot hardly goes anywhere, musically, the work is incredibly charged.

In bringing us these high quality, yet immediately accessible works, Opera Paralléle makes opera a vital part of the artistic dialogue in the Bay Area.