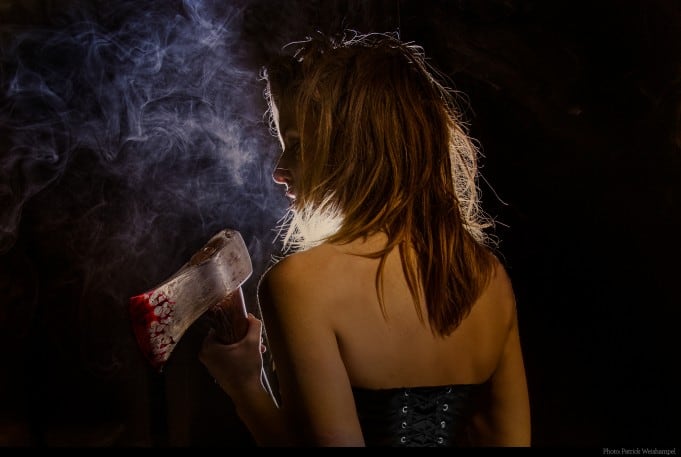 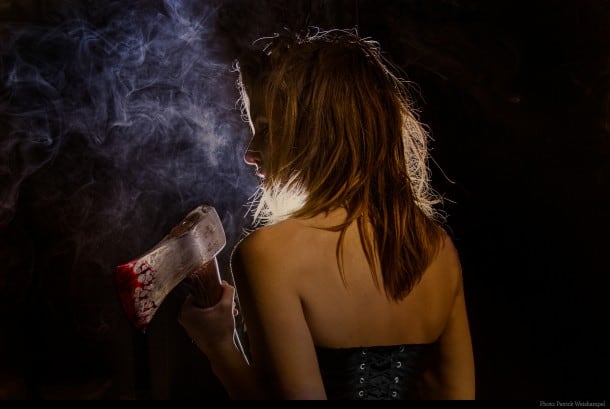 Apparently, all perfectly good ingredients for a night of theater. Portland Center Stage proves that there is still plenty of room for innovation when it comes to musicals. With Lizzie, a retelling of a real-life double murder that took place in 1892, the stage is not a place where actors merely hit marks and recite lines. Rather, it becomes a multi-level, punk rock inspired place for belting out an energetic–extremely energetic–set list. Dark family secrets and Carrie-levels of blood ensure that we won’t confuse this material with The Lion King anytime soon. Is this theater? Is this a concert? The answer could very well be this is what the new post-American Idiot style musical looks like.

No question, Lizzie is edgy. In a seas of re-runs, and watered down touring productions, I’m not complaining one iota. For the record, this is the first time that I can recall the line “What the F—?” featured so prominently in the chorus of a number (“What The Fuck Now, Lizzie?!”). When Emma (Leslie McDonel) discovers her younger sister Lizzie (Mary Kate Morrissey) has done the unthinkable, she fiercely admonishes her – before, later, suggesting she burn the blood-soaked dress. It’s a slightly shocking, and equally entertaining moment.

Fortunately there is an intermission. It was a brief respite from balls-to-the-wall punk-rock signing (thrilling), concert-level lighting (imaginative), and 6-piece live band (outstanding). Checking my Facebook during the break revealed a stream of banality that reminded me why good theater helps us escape the mundane and does not compromise; it takes chances, pushes the envelope and often reaches for something not next to a jar of commercial viability. 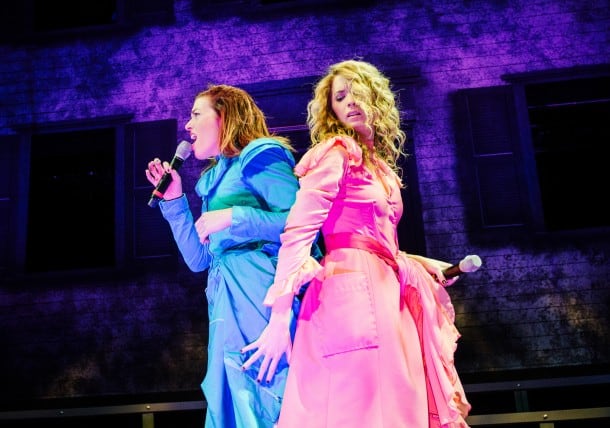 By mere happenstance I was able to take in this show during a short vacation to Portland. It was closing night (June 29), and after a day that featured a long wait to experience a much ballyhooed viral sugar experience (Voodoo Donut), a congee search that ended well (Good Taste), a welcome recharge (AG Massage), some wine bites and people watching (Taste 23), impromptu and unexpected shopping (The Hat Shop) and top notch dining experience (Bamboo Sushi) we found ourselves strolling the Pearl District back to our hotel, but not before fortuitously stumbling upon Portland Center Stage. It was proverbial icing on the cake – and yet didn’t require a stop at Bluestar, or Salt & Straw (does Portland love its cult desserts or what?!).

How best to describe this experience of this musical?

Lizzie is like Downton Abbey, Carrie and American Idiot, mashed up. It’s the kind of musical that Stephen King and Stanley Kubrick might have collaborated on. In other words, it’s right smack dab in the middle of my wheel house. Based on the raucous audience reaction last evening, and the instantaneous standing O, I was not alone in that assessment. Just remember: it’s okay to be occasionally naughty, but best not to be “murder your parents” naughty.