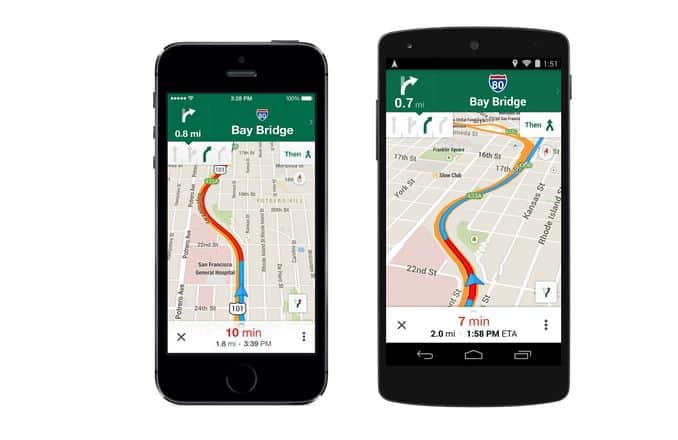 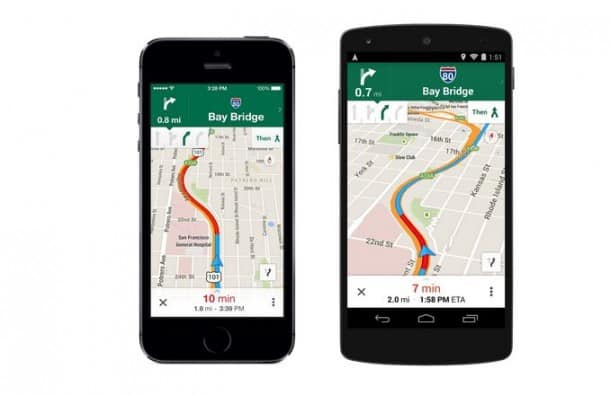 Google pushed out a major update to its Maps app this week. New features, as widely reported, include offline maps (“Save map to use offline” – convenient, for example, if you want to use a non-LTE tablet for nav), search filters (price, user rating, etc.), integration with the Uber app, train schedules, and the ability to tag places you want to visit (via star icon).

As far as I can recall, this is the most significant update to the venerable Maps app in years.

But my favorite feature out of all the new ones Google packed in yesterday’s refresh is this:

Finally. Thanks to this handy feature, Google Maps will now make commuting in and around the San Francisco Bay Area (just slightly) more tolerable. Now when you approach an intersection or exit (with multiple lanes), the app will suggest “which lanes are best for your route.” To those used to driving across sprawling highways, with seemingly endless numbers of lanes, this is tremendously helpful, and, as a bonus, nerve calming (note: at this point the lane guidance feature is only available in Canada, Japan and the US).

The irony of this “new” lane guidance feature is that it’s been a staple for years in traditional navigation devices made by Garmin and Magellan.

Part of the reason likely has to do with the idea that Google likes to reinvent everything from the ground up – to eschew the ways of the past. With navigation that meant doing away with the traditional address input method. The interface was stripped clean. In typical Google fashion, the search bar became the defacto point of data entry and interaction. In the early days, that was a maddening decision. Where was my list of frequent destinations? How could I search for nearby gas stations? Why couldn’t I just tap a button to return “home”? In time, Google solved all of these issues, sometimes with clever ideas (voice recognition) and other times with less elegant ones (recent destinations is a somewhat haphazard list accessible when tapping the search bar).

So while Google sought to reinvent navigation, it learned along the way that others before it had figured some of this stuff out already.

Hopefully Google eventually offers choices when it comes to fonts, and type sizes. Even on the generously proportioned Nexus 5, things can be hard to read, especially in the multi-lane heat of the moment when jockeying across, say, the 880/101 interchange. Thankfully, though, lane guidance should make life on the roads in the SF Bay Area a tad more tolerable. Still, nothing beats Pandora and Google Music in that respect.