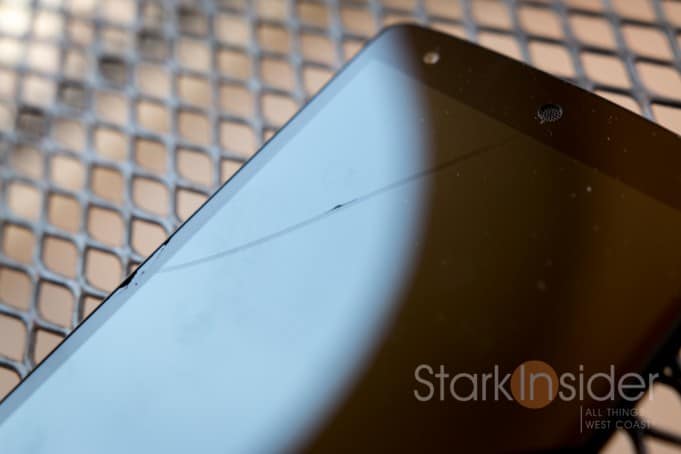 Nexus 5 is Google’s best pure Android phone yet. I like just about everything LG has done with the design (save for that odd camera lens bump on the rear that conspires to keep the phone from sitting flat on a surface). The price–only $349 unlocked–is especially sweet. But recently I discovered a potential design flaw.

A few weeks back i noticed a tiny, hairline fracture in the screen: 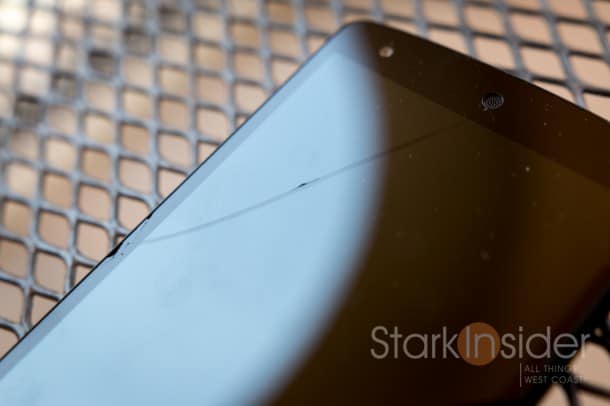 In these photos it looks immediately obvious (especially now that it has worsened over the past two weeks). In person though, using the Nexus 5 day-to-day, it is harder to notice. I had never dropped the phone. Almost always kept it in a protective case. So why a crack?

Over the weekend we hosted a small BBQ. Being in Silicon Valley, there was at least one or two engineers and product designers on hand. I asked them to take a look at it. A consensus formed that the speaker cutout (that small circle with grill) was not reinforced properly and could be a point of weakness, potentially exacerbating the formation of cracks in the screen.

We compared the Nexus 5 to an iPhone 5 (no shortage on hand, me and my Android were vastly outnumbered yet again). The iPhone 5 speaker cutout was reinforced was a beveled edge, that would, I’m told, provide relief when pressure was applied to the screen. It was an interesting, apparently minor, design discrepancy between Apple and LG (who manufactured the Nexus 5 for Google). 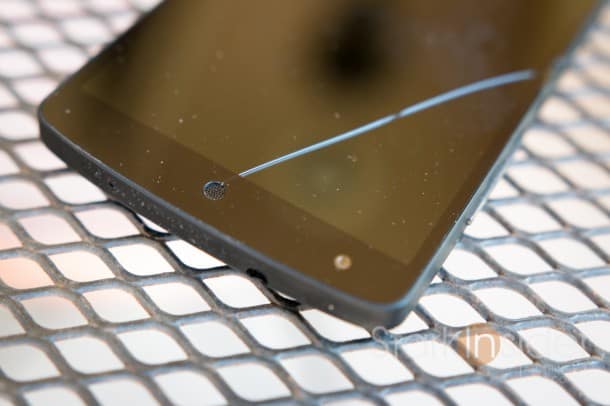 Was a faulty design of the speaker ultimately the cause of the fracture?

Who knows. I have a theory that just having the phone in my pocket creates pressure, especially when I’m seated. A certain amount of flexing could be enough to crimp the display ever so slightly, resulting in the crack you see here. If that’s the case, then, that’s surely a design flaw – after all, we store phones in our pockets all the time.

Regardless, I’ve been using Android phones since 2009–OG Droid, Galaxy Nexus, Nexus 4, Nexus 5–and this is the first time I’ve had any issue whatsoever with a screen. It’s a bit of a bugger because I like selling my handsets annually, and upgrading to the next great Android. I have read of others who have complained about the fragile build quality of the Nexus 5. This would appear to be one more example. Part of me believes this would never happen with something like, say, the magnificently built HTC One (or even the tank that was the 2009 Moto Droid for that matter).

Being under warranty I decided to call Google.

They connected me (efficiently and without drama) to LG. Any warranty claim was a dead end, however. I would need to pay for the repair, shipping/handling. Not to mention, I’d be without a phone in the meantime. I can understand that screen cracks, and physical damage not being covered under warranty; I suggested that since I had not dropped the Nexus 5, that the resulting hair line fracture was not my fault, and likely a design flaw as pointed out by my colleagues. No dice.

The LG customer service rep noted that the existing screen damage could get worse over time. He said it could also lead to other malfunctions. I wonder if that’s why the GPS performance has been flaky in recent days? 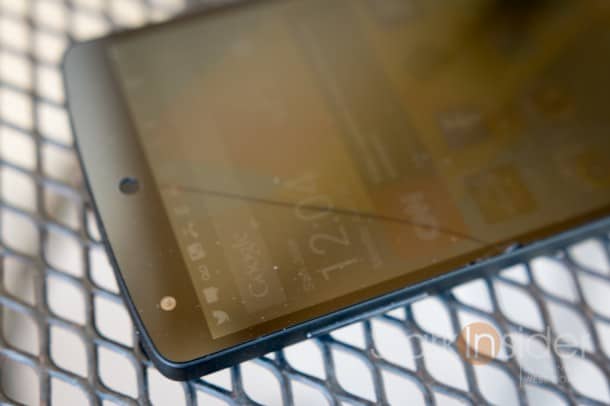 Sure enough, I notice the crack getting slightly bigger. And, most recently, there’s significant damage starting to incur at the left edge, perhaps due to the now weakened structural integrity.

This bugaboo aside I’ve been quite pleased with the Nexus 5. It’s fast, slim and trim (to a fault?), and runs KitKat like a charm. Battery life could be better. And, as it turns out, build quality too. Maybe the gadget Gods are telling me something… Upgrade. Upgrade. Upgrade. Hmmm, no shortage of choices these days. Samsung Galaxy S5. The new HTC One. And, my favorite to date, the intriguing new OnePlus One (running a Cyanogenmod ROM).