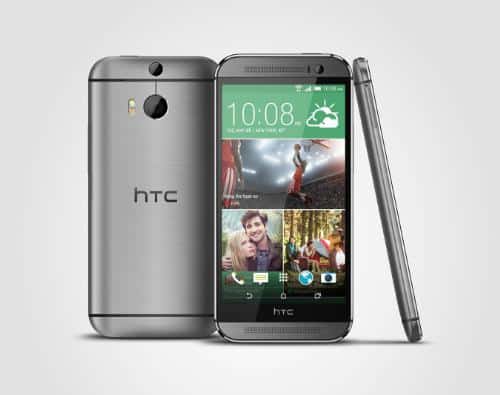 Those in the market this year for a flagship Android smartphone are in for a tough decision. In a good way. Will it be the Samsung Galaxy S5? The upcoming Nexus 6? Or… the beautiful new HTC One?

Today, as we all know, HTC took the wraps of its One (M8), the successor to last year’s design darling, the… well, One (M7). Not the most imaginative naming. But let’s be thankful HTC didn’t go with One 2. Spec-wise the new One is everything we’ve been expecting (I’m still convinced there’s absolutely no such thing in tech as a surprise):

The 2014 edition of the One is available in glacial silver, gunmetal gray or amber gold. Under contract expect to pay $199 or $249, or go contract free for the decidedly non-Nexus like price of $699 via the Google Play Store (available for pre-order today, ships “in the coming weeks”). We were disappointed to hear the unlocked GPE version of the new One would go for $699. Last year, the One sold for $499 on the Play Store, so the price hike is not insignificant.

Design-wise the new HTC flagship looks very much like last year’s model. One subtle and pleasing difference is the subtly rounded back edges. In the hand the phone feels slightly more comfortable. The trade-off is a slightly less industrial look (many of us loved the squared off 2013 design).

Like Apple, HTC has elected to go with a metal unibody. Safe to say it’s gorgeous. Those accustomed to plastic Samsungs are going to be pleasantly surprised – this is what a well-made phone looks and feels like!

Okay, then, the big question:

HTC One or Samsung Galaxy S5, or Nexus 6?

First off, if you want your 2014 Android flagship now, we’ll have to remove the Nexus 6 from that list. It’s not out yet. If your patient enough, the new Nexus (which could be made by HTC) will likely arrive some time in Q4. If the past is any indication it will go for $300-350 unlocked, so it might be worth holding out for.

The S5 is certainly no slouch. If you don’t mind plastics then it’s a fine choice, though the updated model underwhelms. At only 8.1mm it’s worth noting that the S5 is slimmer than the HTC One (9.4mm). Also in Samsung’s favor is its dust- and waterproof design.

At 441ppi, the HTC One comes out on top when it comes to pixel density. It helps, of course, that it has “only” a 5-inch display versus the 5.1-inch display found on the S5.

We won’t know yet if the new “Extreme Power Saving Mode” that HTC says will deliver 14 days worth of battery power is the real deal until we get our hands on a tester, but with that feature and a decent 2,600 mAH things do look promising for the One M8 in the endurance department.

One more thing. Don’t forget the Galaxy S5 uses capacitive buttons, love ’em or hate ’em. HTC, meanwhile, has changed things up for 2014 and gone with on-screen controls, much like you’ll find on the Nexus 5. Which is better? A tough call. A personal decision ultimately. The on-screen controls (back, home, apps) do take up screen real estate, but, on the upside, disappear when you’re doing things like watching a video, for example.

With the One M8, HTC didn’t revolutionize the smartphone. Then again, no one is these days. We continue to see incremental improvements, and that includes Apple and the iPhone 5S. The next big thing appears to be wearables, so meantime smartphones are getting slightly less R&D love it would seem. In the end, though, my money is on the HTC One. The premium feeling in the hand is not to be underestimated. And, don’t forget, those front firing speakers sound mighty fine. It’s pretty clear: if you liked last year’s HTC One, you’re going to like this year’s HTC One. It’s a refined, improved, and more comfortable Android. And, that’s enough in my books to tip the scales in favor of the HTC One over the Samsung Galaxy S5. As for the Nexus 6? Well, who knows. October and November are far, far away. If you’re like me, you’ll need your flagship goodness right now. HTC One it is.