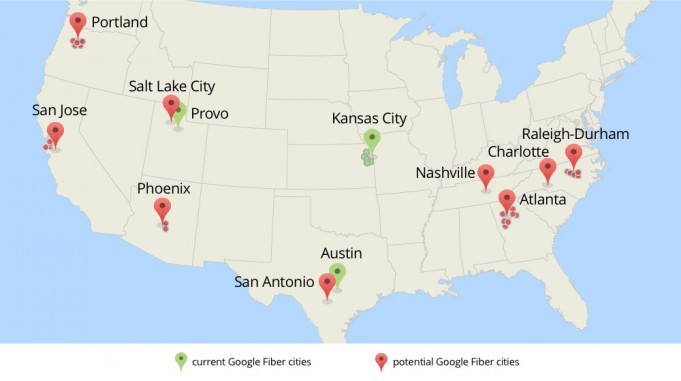 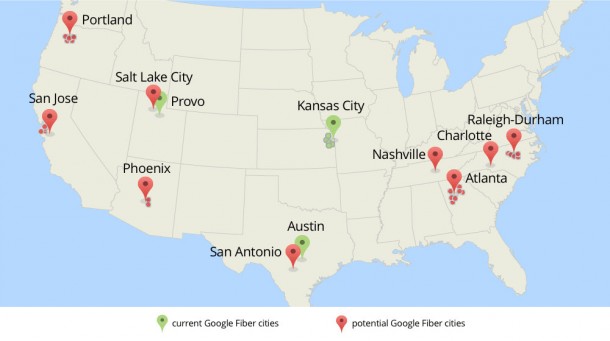 “We hope this news inspires more communities across America to take steps to get to a gig.”

Great news for those living in Silicon Valley and feeling crimped by the giant cable-based Internet providers.

Google is coming. And coming fast.

Well, speed wise that is. Today, the search behemoth announced plans to expand its gigabit Internet service, known as Google Fiber. What started as a pilot in Kansas City is now being rolled out to 34 additional U.S. Cities.

Cities in Silicon Valley that will receive the service include San Jose, Santa Clara, Mountain View (Google’s home base!), Sunnyvale and Palo Alto. Interestingly, San Francisco is not mentioned. And neither are cities on the other side of the peninsula such as Fremont (Tesla’s Elon Musk could probably do something about that), Oakland or Berkeley.

The bad news: you’ll need to be patient. Don’t drive over your Comcast cable router just yet. No dates have been provided as to when Google Fiber will be available for the expansion cities.

The blog post, by Google VP Milo Medin, does say there will be announcements by year end with further details. “We aim to provide updates by the end of the year about which cities will be getting Google Fiber. Between now and then, we’ll work closely with each city’s leaders on a joint planning process that will not only map out a Google Fiber network in detail, but also assess what unique local challenges we might face.”

Google has a “checklist” that it reviews with each city’s agencies. There’s a proviso on the Fiber site with further detail, “there are a few circumstances that might make it tough and even impossible to build our Fiber network in a city.” It appears that in order for Google Fiber to become reality, each city is going to need to do their part to make it happen.

Based on current pricing, gigabit internet service will go for $70 per month (a bundled offering with cable could also be available for $120 per month). But it remains to be seen if the current pilot price structure will apply to Silicon Valley-based cities.

If anything this should at least light a fire under the old guard. Why on earth the Comcasts, Verizons and AT&Ts move so clumsily into a high speed, highly connected world is somewhat puzzling – if not predictable.

As for gigabit in Silicon Valley. There’s a few million people, thousands of start-ups, and eager streamers ready to welcome it with open arms.