Tegan Ashton Cohan’s performance in Odd Brodsky, an indie film that celebrates the underdog (aka the “lovable loser”), is simply outstanding. Brimming with charisma the actress carries director Cindy Baer’s 2013 comedy with such charm we’re incapable of not being drawn into her dream chasing. Her expressive features, cropped hair and beautifully mesmerizing eyes bring to mind Audrey Tautou in Amélie (2001). Alone it’s reason enough to seek out this charming film.

Fortunately there’s a smart script to support the lead performance.

Cindy Baer along with her co-writer Matthew Irving demonstrate a knack for blending drama, comedy, and, yes, the quirky, without resorting to sentimentality. In Odd Brodsky, Audrey (Tegan Ashton Cohan) is that girl with braces who tries overly hard in school, but fails to get anywhere. Be it singing, playing the piano and violin, painting, or dancing, she is a resolute non-talent – at least in the eyes of anyone but her parents. Then she finds her “true calling”: acting. The film then segues quickly to an adult Audrey. Stuck in a corporate job she pushes paper nine-to-five. She wants to quit to pursue her dream of acting and making it big in Hollywood. Problem is she’s very good at the desk job, even getting promoted despite her every effort to quit. The only way out it seems is to hire a cameraman (“Camera One”) and turn her own life into a 7/24 reality show. What follows is a heartfelt lesson in being true to yourself, believing in friends, and celebrating the “Odd.”

Moments of Odd Brodsky feel Kevin Smith. Extended scenes with dialog often feel decidedly non-glossy, authentic – but not without a dash or two of sardonicism. A love triangle is sweet, if not predictable. And, just when you think you’ve seen it all before, Baer’s direction and penchant for musicality (I’m told there’s 80 music cues) manages to breath fresh life into otherwise familiar territory. Quick tip: before getting vanity plates, be absolutely sure you’re comfortable with your new stage name.

In some ways Odd Brodsky is like a Walter Mitty for women. Ben Stiller’s Icelandic adventure was also about overcoming one’s awkwardness to chase big dreams. The difference between the two is, of course, budget. But constant between them are compelling stories, interesting characters, and the incessant ability to make us smile.

Insider nods and tongue-in-cheek quips about L.A. life as an actress abound. I especially got a chuckle out of the scene that has agents, would-be actors and movers and shakers jogging in the Hollywood Hills. Audrey, wearing some sort of garish, multi-colored ensemble that could single-handedly reinvigorate the Jane Fonda workout, bobs and weaves her way, nary a care in the world. After all, she’s going to be a star! 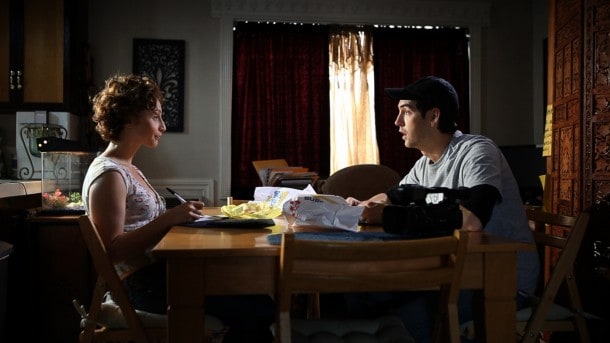 I would like to see about 10 minutes cut from the film, making it a more digestible, flowing 80 minutes. Cutting, of course, is the hardest thing in the world. Oddly, narration in the film comes from Sammy (played with pitch perfect irony and satire by Cindy Baer), a friend of Audrey’s who is hellbent on bringing her horror musical to the masses. So you have a supporting character doing voice-over for a story told visually through the eyes of Audrey. Not an insurmountable challenge to get comfortable with, but definitely an interesting (and quirky!) artistic choice.

Odd Brodsky played last year’s Mill Valley Film Festival (Cindy Baer’s second appearance after Purgatory House in 2004). I didn’t get a chance to see it then, but I’m fortunate Cindy was vigilant in seeing to it that Stark Insider could get a look. Sadly, because we get so many incoming films I’ve had to incorporate a 10 minute rule. If a film doesn’t grab my attention quickly enough, then it’s a goner – life is simply too short, and there’s so much content that we need to keep producing here I’d run out of time otherwise. Odd Brodsky had no challenges in that regard. Dreamers, and fans of smart indie cinema everywhere will immediately be hooked. This film glows. It’s the kind of movie experience that hugs you with oodles of heart, and leaves you thankful that indie films like this continue to be made.