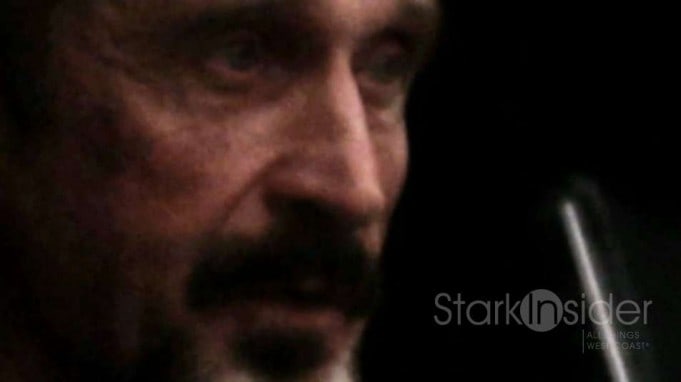 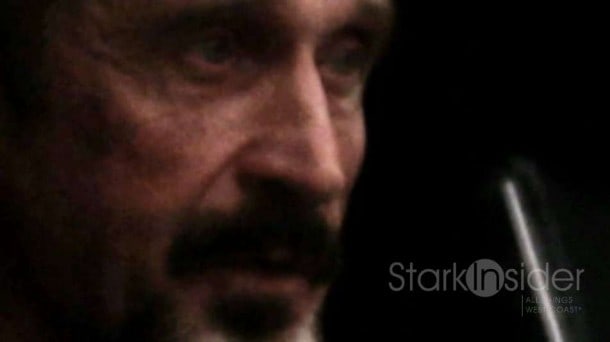 “If you’re a marijuana smoker I would vastly prefer you switch to heroin.”

How to cross the freaky line. By John McAfee.

Forget about sensors and the age of context. If you really want to see things get weird, turn to none other than McAfee himself, the part-time fugitive, part-time movie-broker, part-time tech entrepreneur.

On Saturday, McAfee kept a standing-room only crowd in Silicon Valley rapt for about an hour in an interview (see the Stark Insider TV segment below) moderated by local journalist Dan Holden–who, it must be said, ably kept everything from coming off the rails.

People seemed to agree that McAfee lived up to the hype, at least as a vehicle for entertainment. Later, one person told me it was a “fascinating” appearance. Even Apple co-founder Steve Wozniak seemed in awe of the proceedings.

Holden poked and prodded McAfee on a variety of topics: the dramatic escape from Belize (featuring a faked heart attack), his net worth ($4 or $44 million depending on the day of the week and his mood), the implication in the death of his neighbor (as McAfee notes, no charges were filed), his fascination with drugs (he says he’s not taken any for 30 years), and his seemingly magical ability to attract an infinite number of young girls on command (“I’m 68 years old, I deserve something.”). Somewhere in the middle of all that was a product announcement.

McAfee came across as articulate, bright, and, surprisingly, level-headed, if not incessantly fidgety. He fixed the virus problem. So this whole privacy thing should be a piece of cake! His idea, involving encrypted and anonymous P2P networks that operate at a “lower layer” on the Internet stack, actually sounds plausible. As he explained the technical details I kept thinking of another larger-than-life, high profile Web entrepreneur: Kim Dotcom. The two would make formidable allies.

Regarding the upcoming product “D-CENTRAL,” there was no demonstration, or reveal on this evening. There is a web site, though, called Future Tense Central, featuring a splashy video and countdown timer to launch. A lot of the press are jumping all over the thought of McAfee single-handedly taking down the NSA–there’s a reality show in the making. Then again, this is the guy that essentially founded the anti-virus industry. If anyone could make the Internet unhackable it’s not too far fetched to believe that McAfee, an accomplished hacker himself and out-of-the-box thinker, could.

McAfee briefly talked about two movie projects in the works. One is a BBC documentary scheduled for release in 2014. The other is a project by Future Impact Media in Montreal. If you visit Vancouver be sure to see the “Fly Over Canada” exhibit at Canada Place for an example of their impressive multimedia skills. And Warner Brothers? “I won’t even talk to them,” he says. The studio has hired Scott Alexander and Larry Karaszewski to pen the script for a McAfee movie. Evidently, the duo’s take on the story is not necessarily to McAfee’s liking.

The NSA helped create every single encryption algorithm that we use, and, therefore, can get access to whatever they want.

If McAfee does manage to finish his story on a high note, it will be a comeback for the ages. Based on the reaction of the crowd (which included his wife, seated in the front row, and artist-friend Chad Essley, by chance sitting next to me), there’s no shortage of people rooting for him.

During the Q&A someone asked what he thought about marijuana. As an admitted former drug dealer, McAfee said marijuana users were his favorite. “Their lives never went anywhere. They remained customers forever.”

And about that seemingly counter-intuitive drug advice, to quit marijuana and to take up heroin? “Heroin will take you down faster. And you can then pick yourself up and start your life.”

Here’s to the crazies. And here’s to keeping Portland weird.