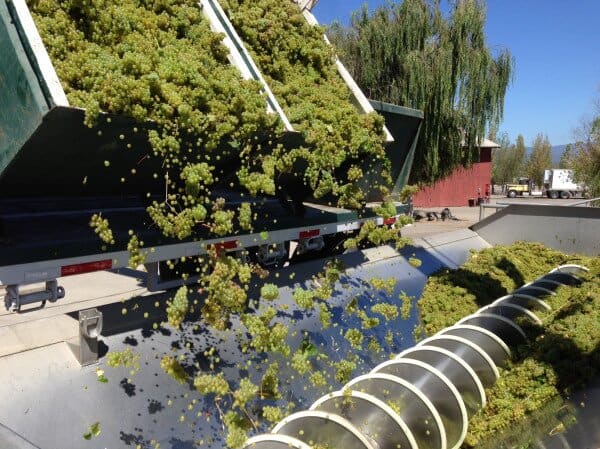 By all accounts it appears as if the California wine harvest is another bumper. According to Wines and Vines the total haul should come in around 4 million tons. That result would near the record of 2012–a year that saw 20% y/y growth. Note that these are only estimates.

Winemakers, owners and others in the industry have taken to Twitter and Facebook over the past few weeks to express their enthusiasm for this year’s crop. Baldacci Family Wine (Napa) called it “awesome” (and that would not be the only time we’d hear that descriptor to describe this year’s wine harvest):

Awesome harvest this year! Check out the breakdown: “Grape Harvest Winds Down in Napa” https://t.co/DVfubwQT3E

Earlier this month writer and wine critic Steve Heimoff (Wine Enthusiast) weighed in early and noted on his blog that the 2013 vintage “looks like one for the ages.” A lot of that has to do with Mother Nature’s apparent disinterest in throwing in a challenge or two. He writes, “There was no killer frost in the spring, no wildfires to give smoke taint to the grapes, very little in the way of heat waves, no huge production as there was last vintage, and as for that pesky rainstorm a few weeks ago, despite some concerns at the time, all it ended up doing was washing the dust off the grapes.”

Jon Bonné of the Chronicle refers to this year’s harvest as “breakneck.” Blink, and you might’ve missed it. 2013’s harvest was “one of the earliest in at least the past decade (starting, in a few cases, in late July) and one of the quickest.”

I cook with wine. Sometimes I even add it to the food. ~ W.C. Fields

Winemaker Carol Shelton (Carol Shelton Wines) told the Press Democrat she was pleased. According to Sean Scully, “she’s particularly high on the petite sirah coming out of Dry Creek Valley, but she said almost everything she got was good.”

Word further down the coast of the Sunshine State was also generally uppity. Amanda West Reade (Monterey County Vintners & Growers Association) told the Californian that “Mother Nature presented us with ideal growing conditions in 2013 — a warm early spring, followed by a rather mild summer weather.”

Even more jubilation, from the Santa Cruz Mountains. Winemaker Dave Moulton (Burrell School Vineyards) said that this year’s harvest was the best ever and “just awesome.”

It will be interesting (as always) to see how the ’13 vintage stacks up to its predecessors, most notably last year’s wines which were made from grapes harvested under similarly agreeable weather patterns.

Will the quality be on par?

And what about the flavor profiles, will there be notable differences in character?

Price-wise, there’s no reason, at least from a supply perspective, to expect dramatic price increases. Other factors–the economy, market positioning, production costs–can also, as we know all too well, impact the ultimate price paid for bottles by consumers.

THE RESULTS ARE IN: Top 5 Wine Personalities of 2013 (VIDEO)