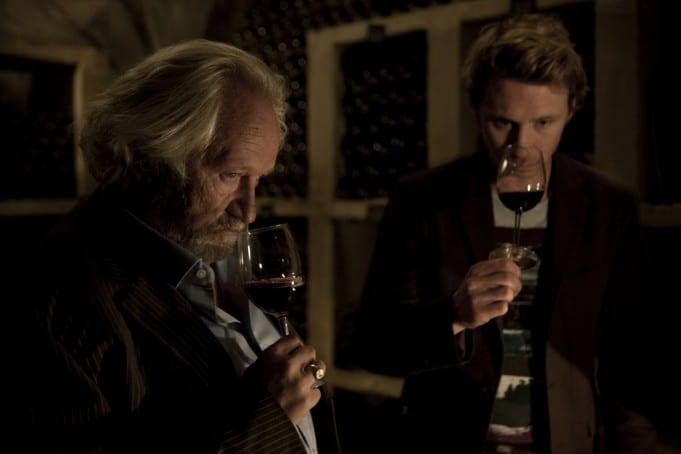 You Will Be My Son (Tu seras mon fils)

Stark Insider was given an advance screening of You Will Be My Son (Tu seras mon fils). Here’s the review of the French film that opens September 20th in San Francisco. Does this intergenerational wine drama live up to its Bordeaux pedigree? Read on to find out.

You Will Be My Son, which opens this week across the San Francisco Bay Area, is a serious wine movie about the serious issue of succession. At a prestigious estate in France, we’re given a first-hand look at the patriarch of a family winery in the midst of turmoil. Who will run his wine business and how will the operation moves forward after he’s gone (cremated in an “oaked” casket no less)?

Like a Godfather of Wine of sorts, Paul de Marseul (played by magnificent French actor Niels Arestrup) rules his business with an iron fist. He knows every detail. And he’s revered across the industry–and even knighted by the French government. Posing next to his Jaguar for a magazine cover story, he whisks away the photographer, “that’s enough.” He needs to get back to the barrel tastings, to the fermentation room, and to the vineyards, where he admonishes the workers for not cutting back moldy grapes.

“A wine tells a story. Like a woman’s perfume.”

Then there’s the frustrating business of teaching his flunky son Martin (Lorànt Deutsch, with meager aplomb) the ropes. The crux of this intergenerational drama revolves around this dysfunctional father-son relationship. They are constantly at odds with each other. Eventually the son breaks down, “you’re a snake!” But there’s no stopping harvest.

“Do you think you have to love your child?”

Talking about the project, the director, Paris-born Gilles Legrand, said, “We have travelled to many vineyards in Burgundy and Bordeaux, and soon I realized that all these great winemakers had a common concern, that of transmission: a double title.”

It’s an interesting and intelligent concept, and one I don’t recall being explored before in cinema. Legrand is a skilled enough filmmaker and it shows. In lesser hands this material might’ve seemed better suited for a made-for-TV (Web?) special. While not nearing the levels of Sideways or even Bottle Shock there’s enough here–work, life and love–to make for a satisfying experience.

You Will Be My Son drags, ironically (but not surprisingly), when the inner workings of the winemaking process take center stage. Mold, oxidization, Brix levels, and terroir don’t make for the most enthralling subjects on the big screen. Fortunately Legrand recognizes this, and instead ratchets up the family tension. Unfortunately, the pay-off is a mixed bag. Where he could’ve gone for the jugular (and there’s several tempting options), he instead opts to land on a safety net. In short, the script might have benefited from a dash of Shakespeare.

“Grapes must be sorted by hand!”

The first act seeks to draw the extremes between the father, who’s a steadfast perfectionist and traditionalist, and the son, who is painted as an utterly aloof charlatan more interested in jogging than tending to the vineyards. Often resorting to ridicule, the father continually loses patience; sadly his would-be heir isn’t up to snuff and fails to meet his world-class winemaking standards (“Martin’s lack of palate is regrettable, given his pedigree”).

If the goal of the combative repetition early on is to paint Paul de Marseul as cold, and as only concerned with the well being of his grapes, then the filmmakers have succeeded. Part of the problem this creates, though, is that we have two unlikable leads: one who is a heartless taskmaster, the other a spineless puppet. The lack of a protagonist that the audience can relate to or cheer on is perhaps an Achilles heel. That might sound overtly American, that we need black and white. Fair enough. But here the middle ground is not so much brimming with intrigue and nuance as it is with muddiness.

Thankfully, Anne Marivin, as the feisty daughter-in-law (“We fuck all day like rabbits”), brings gravitas to a few scenes. In her I’m reminded of Connie Nielsen’s stoic character in Gladiator (2000) – if she can’t rightly take to the throne then she can at least try to arbitrate the process.

Like a fine Bordeaux, there’s an unflinchingly serious tone to the film. No doubt succession at a top wine estate is serious business, but the overall absence of any sense of levity, even for a moment, results in a sombre rhythm. One that occasionally plods. I find the lack of a laugh or two highly unusual for a French film. After all, this isn’t High Tension (2003, 4.5 out of 5 stars). Or maybe it is?

What saves You Will Be My Son, however, are three things.

First, the acting. It’s solid. Even, at times, profound.

Yves Angelo’s cinematography is sumptuous, and tantalizes with shots of expansive vineyards, claustrophobic cellars, dreamy Bordeaux landscapes. Shot on location in Saint-Émilion at the Château Clos Fourtet the romanticism of wine country is elegantly juxtaposed against the untold amount of sweat and manual labor that goes into producing an esteemed bottle of wine. An aerial shot, near the film’s end, is alternatively stunning and devastating.

And, for those who work in the wine business or enjoy learning about wine, this will be a must-see (like SOMM, earlier this year). In that respect I don’t think it will disappoint.

You Will Be My Son opens September 20th at Landmark Theatres in San Francisco.

WATCH: ‘You Will Be My Son’ Trailer