Playwright Jon Robin Baitz’s Other Desert Cities was a 2012 Pulitzer Prize finalist last year. It’s easy to see why. Every line of dialog seems to be on the verge of combustion. Beneath the surface of an apparently picture-perfect Hollywood family lingers something sinister. But what? If the pages of a drama in Vanity Fair or The New Yorker came to life it might look something like this. And despite the absence of over-the-top effects, superheroes, or a thumping rock score, the play turned out to be a hit on Broadway (grossing over $14 million according to BroadwayWorld). Other Desert Cities is a fine choice to kick-off TheatreWorks’ new season, where it opened at the Mountain View Center for the Performing Arts on Saturday evening.

Other Desert Cities is like a mash-up of a chess match, Fox News, and an episode of House of Cards.

Novelist Brooke Wyeth (Kate Turnbull) is in Palm Springs, along with her brother (Rod Brogan), visiting her parents for Christmas. It should be a happy occasion. And it mostly is in the first scene, so long as the GOP or 9/11 or America-at-war is kept out of the discussion. Polly (Kandis Chappell), the patriarch, runs the household with an iron fist, steadfastly protecting the family’s reputation. Her husband Lyman (James Sutorius), a former film and television star (with a gift for extended death sequences), along with Brooke’s younger brother Trip (Rod Brogan), a reality TV show producer, routinely find themselves in the role of peacekeeper as casual conversation (“It’s amazing what you do to entertain yourself in the desert.”) rapidly morph into explosive, political throw-downs (“Drugs destroyed the American century!”) between mother and daughter.

And as if Polly’s hands aren’t already full (in addition to the gin and tonics that is) puppeteering the family, there’s her sister (Julia Brothers), a recovering alcoholic, who’s temporarily living with the family and not one to steer clear of controversy.

Much of the story revolves around older brother Henry. Brooke resents her parents for not doing enough to prevent his suicide–something to do with him being implicated in a military base bombing followed by his jumping off a ship to his death in the high seas. If her parents seem quick to erase his memory, much of which revolved around falling into the wrong crowd in Venice Beach, she’s doing everything in her power to honor his legacy, which didn’t quite politically align with the right wing leanings of Mom and Dad. When her follow-up novel, much to everyone’s surprise and anger, turns out to be a tell-all memoire, the upscale Palm Springs condo descends into emotional purgatory.

Other Desert Cities is like a mash-up of a chess match, Fox News, and an episode of House of Cards. Exchanges are calculating, and overflowing with agenda. In the second act, just before intermission, everyone is digging in their heels, not willing to give an inch in their convictions. Perhaps here the work gets a tad domestic, and yelling matches endure longer than necessary to repeatedly make the same point: Brooke believes her Mom’s political stance overshadowed the love for her son and led to his death.

Just when I thought the play was going nowhere fast comes the crisp, beautifully constructed second act. To use an oft-overused expression, there are, indeed, revelations. Will the family force Brooke to abandon her memoire and six years of hard work, or is there any hope at all in such a politically, emotional household?

TheatreWorks, which is co-producing this play along with the Old Globe in San Diego, has always upped the ante when it comes to quality sets. This one is no exception. In fact, this may well be the most beautiful, detailed set I’ve ever see here; a modern, semi-circular space with soaring glass, rich woods, a nifty bar (that gets plenty of use), and overall vibe that would not be out of place in Architectural Digest. My only nit: the backdrop–a mountain range–though lavishly constructed is, perhaps, too literal.

Performances are another plus. As the commandeering mother, Kandis Chappell brings to her role unrelenting conviction (with nary a hint of vulnerability, at least early on) that pushes her character just this side of a world-class dictator. Her and Tony Soprano might’ve been quite evenly matched–well that is if he played tennis. The Bay Area’s own Julia Brothers is an absolute hoot as the footloose sister. Dressed in designer knock-off clothing with spikey hair, she is a sober play-by-play analyst of sorts, observing for the most part from the outer circle.

Though I never felt 100% attached to any of these characters, the dialog and the quality of the acting, along with a smart script, make this production a real treat. Fortunately, Brooke didn’t pass by “The Other Desert Cities” marker on the highway and instead opted to confront demons past. 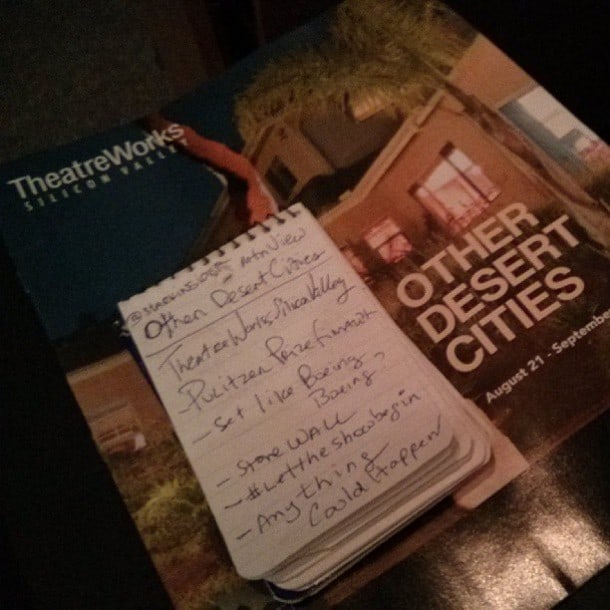