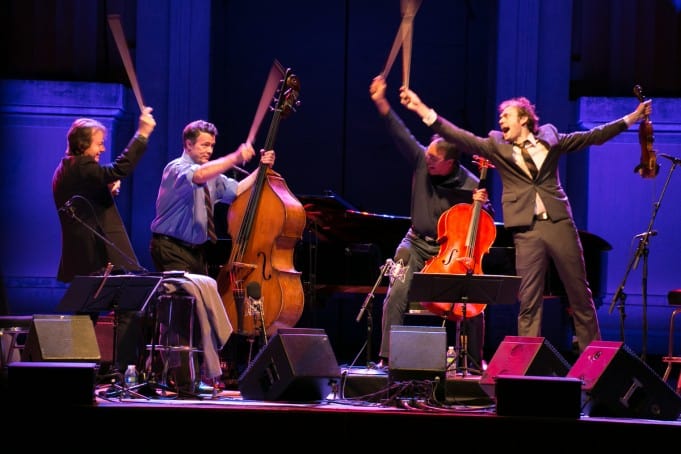 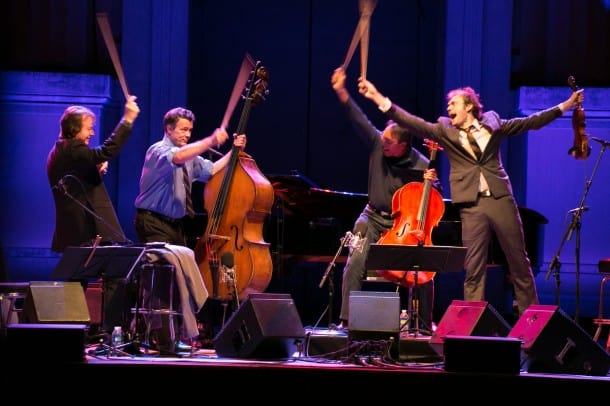 The queue was snaking down the road an hour and a half before the concert began. Crowds were already thickening on the hill overlooking the Greek Theatre at Berkeley. However, this was a string quartet, not the newest incarnation of the Grateful Dead. But then this wasn’t just any string quartet – and it wasn’t just any strings. The Goat Rodeo Sessions (hosted by Cal Performances) bring Yo-Yo Ma, Edgar Meyer, Chris Thile, and Stuart Duncan together, joined occasionally by guest Aoife O’Donovan.

I’m hard pressed to think of any other musical group that boasts of one MacArthur fellow, let alone two. Meyers and Thile so stretch the boundaries of what can be done with very unsexy instruments (double bass and mandolin), that you’ll never think of them the same way again.

The first time I heard Edgar Meyer, I could not have been more stunned than if pineapples sprouted up where I’d planted petunias. I simply did not know double basses could do things like that.

Hearing Chris Thile play mandolin for the first time was equally startling. Bach played with unconventional instrumentation tends to be forgettable – a novelty at best. However, Thile’s Bach partitas became my go-to Bach – one that I play only slightly less often than Glenn Gould’s recordings of the same.

Yo-Yo Ma and Stuart Duncan often occupy different ends of the musical world, with Yo-Yo Ma associated with the symphony hall and Duncan with Nashville. But this is a narrow view – and the Goat Rodeo is anything but narrow. Yo-Yo Ma has an intense purity that grabs my heart whenever he pulls the bow on a single note. Duncan’s art is best at high speed. If ever there was an Indy-500 driver of the violin, it would be Stuart Duncan.

Taken together, this rock star group created the Goat Rodeo Sessions, which was presented by Cal Performances. Much joking from the stage focused on the naming of things – including the Urban Dictionary definition of goat rodeo: “the most polite term used by aviation people (and others in higher risk situations) to describe a scenario that requires about 100 things to go right at once if you intend to walk away from it.”

Limiting this to 100 things might come up short, however, compared to the action that was on stage. Most reviewers characterize this music as “multi-genre,” or something equally vapid. However that doesn’t begin to do this justice, as the compositions morphed from one thing to another even in the span of a single phrase so that you were at the edge of your seat just trying to follow who was carrying the lead. This music gripped you from the opening ostinato to until the encore (appropriately enough the lullaby “All Through the Night”).

In between snippets of what sounded suspiciously like “St. James Infirmary” and Bach sections, nestled everything from extended passages of new music, to blue grass  and everything in between melding together, reformulating, and starting anew. I wish Goat Rodeo was around in 1999, because something this huge was needed to say goodbye to the old millennium, while looking forward to the new.

Aoife O’Donovan joined the group for a handful of songs, including a version of “Farewell Angelina” that put me right back where I was when I first fell in love with this song decades ago. O’Donovan has a strangely naked voice, devoid of ornamentation or tremulo; her crystalline delivery makes you focus on the breath of the song and the honesty of her phrasing.

Cal Performances set the bar impossibly high, bringing us The Goat Rodeo Sessions at the beginning of the season. I’ll be glued to the Goat Sessions DVD for some months to come.

IN PHOTOS: The Goat Rodeo Sessions 8.24.2013 Hosted By Cal Performances 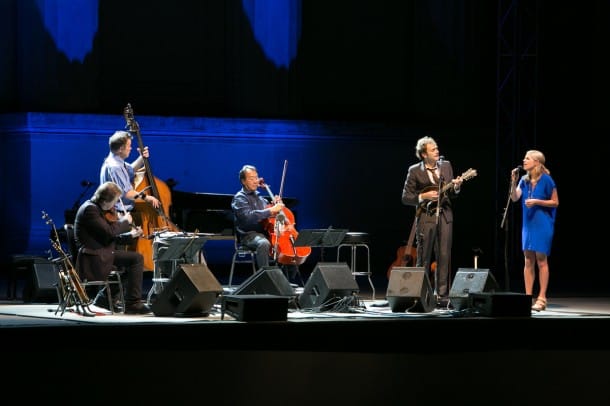 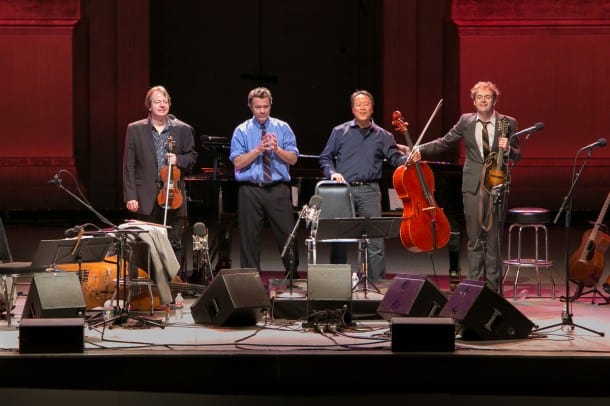 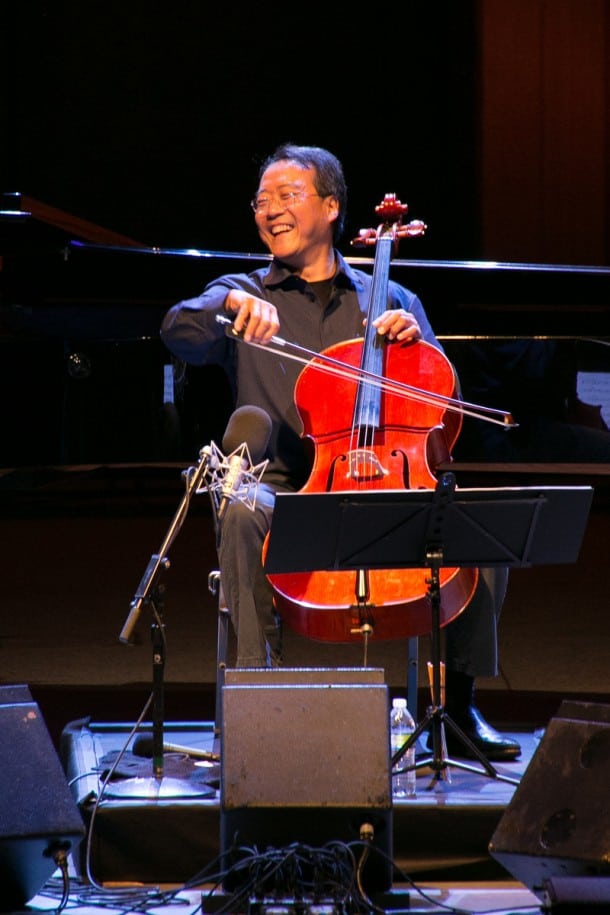 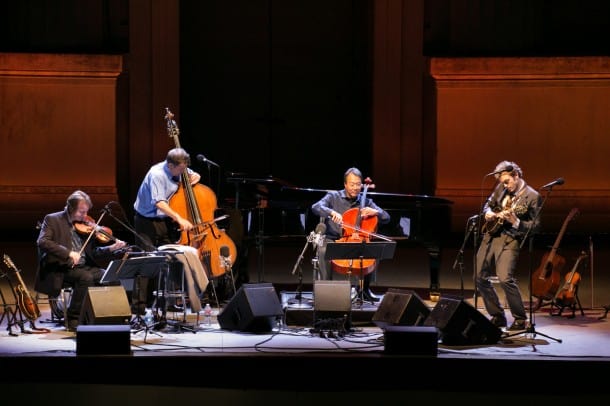 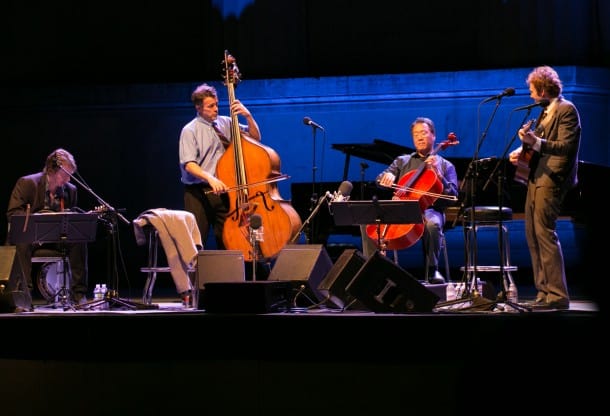 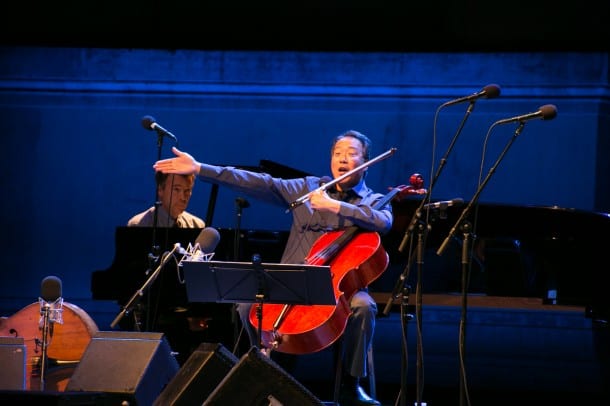