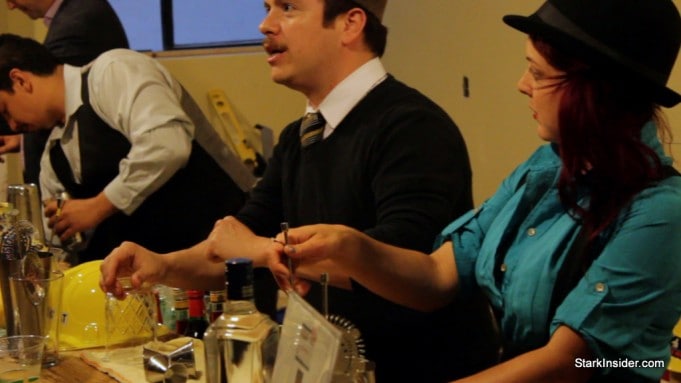 An Evening with Edgar Meyer

From the San Francisco Symphony to Chanticleer to a huge pot of Loni’s yellow curry (check the Stark Insider recipe section), I ‘ve been feeling like a billiard ball bouncing off every possible side of heaven. However, the ante just got upped with last night’s New Century Chamber Orchestra performance. I’ve never been to a classical performance that made me completely rethink everything I thought I knew until last night. However, I’d never heard Edgar Meyer before.

Before I explain how Mr. Meyer showed us what the bass is really capable of, it’s important to thank Nadja Salerno-Sonnenberg, music director of the New Century Chamber Orchestra for bringing him to us. Ms. Salerno-Sonnenberg is the only one I know who stands the Yeats’ adage about the worst being full of passionate intensity on its head. Ms. Salerno-Sonnenberg’s intensity is immediately evident the minute she walks to the stage. Her quick, often dismissive movements betray a focus that is clearly elsewhere. We’re all richer because of this – especially because she brought Edgar Meyers and his bass to the stage at First Methodist in downtown Palo Alto last night.

We all think we know something about the bass. You know – that great addition to jazz bands that drives the piece forward, or that tall thing off to the side of a symphony orchestra? The one that the geek in high school played? The bass is all of those – but it’s also a lovely, supple, sinuous, soprano instrument that can take the place of the first violin in a chamber orchestra for a whole 30 minutes and leave you gasping for more. I just didn’t know that until last night.

Last night’s program opened with Rossini’s Sonata No. 1 in G Major. Anthony Manzo’s bass was what my ears kept coming home to in this soaringly effortless piece. Little did I appreciate that it was just a warm up for what was to come.

Edgar Meyer joined the orchestra for the balance of the first half. He began with a Bach piece that wasn’t included in the program – and which remains nameless. The real heart of the second half was in his performance of Giovanni Bottesini’s Concerto for Double Bass in B minor (edited by Mr. Meyer himself). I confess to being unfamiliar with Bottesini before last night. In his time, he was dubbed the “Paganini of the double bass.” This was a wise selection as since the first movement was much higher energy than the work that preceded it.

Meyer’s treatment of this work was jaw-dropping. It was a if this single work was intentionally designed to show that a bass could be a deliciously lyrical (first movement), delicately sensuous (end of the 2nd movement), frantically agitated (beginning of the 3rd movement), and shockingly soprano instrument (3rd movement). The audience paused as if in disbelief afterwards before rising for a standing ovation. In return, Meyer treated his fans to a bluesy bayou piece before leaving a largely numbed audience behind.

The second half of the concert (sans Meyer) included Shostakovich’s Chamber Symphony followed by Mahler’s Adagietto from Symphony # 5 in C Sharp Minor. I would not have been at all surprised if the Mahler piece (especially cellist Principal Susan Babini) caused First Methodist to levitate several feet off the ground. A second standing ovation followed.

As friends know, I’m quick to dismiss something as “technically flawless garbage” or “lovely, lyrical and forgettable.” After this week, I really need to see some bad theatre or go hear bad music. In the meantime, however, I’m going to listen to all the Edgar Meyers I downloaded from iTunes.