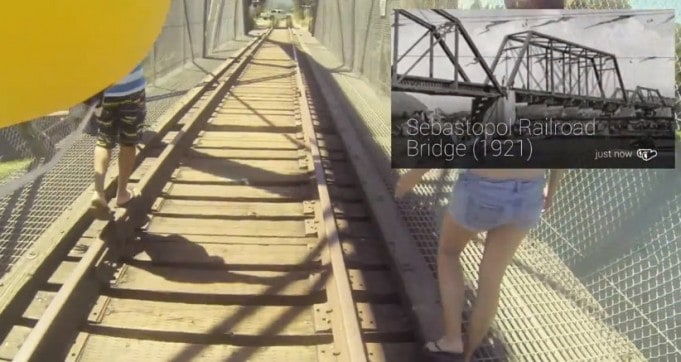 When it comes to Google Glass I’ve yet to decide if the cyber-kit is an exercise in pure Geekery, or actually a practical device that could portend the future of computing as we know it – essentially, “wearable computing.” Part of the problem is one of perception I suspect. They just ooze Nerd. I mean if there’s an ounce of cool in any room, it’s likely not coming from the guy wearing them ogling the singles at the bar.

Regardless of what happens with Glass – hit or miss – Google can already mark the project up as a rip-roaring success. And that’s simply because the biggest, most interesting story of tech in 2013 is, without a doubt, Google Glass.

With very little happening in the smartphone and tablet space (most of the announcements have been incremental fare such as the Moto X smartphone and secondgen Nexus 7 tablet… Apple meanwhile has been uncharacteristically quiet this year) Glass has absconded the majority of headlines. Privacy, the future of computing, the contextual era. You name it. Glass is at the epicenter of the Tech fiefdom.

At first I was staunchly opposed to the idea of always-on glasses that make its wearable look certifiable, creepy.

Over the past few months, though, I’ve begun to see the light. Maybe.

Today it was this piece in VentureBeat that got my neurons in a knot. Field Trip is a nifty app that could very well become the de facto tourism guide.

Remember the last time you visited an art museum? Or a famous landmark?

I’m betting you wore a headset and took a self-guided tour while listening to a docent of some kind tell you about the history, while peppering in all sorts of interesting facts. If you didn’t, at least I’m guessing the option was there. My guess: in a few years we can dump that stuff into the same scrapyard where they’re about to heap all those Surface RTs (the Pro is great I swear!). Because Field Trip on Glass looks like the future to me. Look at an object, such as the “Old Faithful Geyser” as referenced in VB, and, presto, information about it is instantly in view. The possibilities are mind blowing. Combining this type of real-time (along with one of the catchwords of 2013: contextual) information opens up all sorts of doors for tourism, education (socially-connected field trips based using Google Glass) and exploration.

Google, the developer of Field Trip, sources content from a variety of well recognized partners including Zagat, Cool Hunting, and the Public Art Archive.

As Sean Ludwig of VB notes, “sometimes, seeing into the future only requires you to look straight ahead.”

Indeed. And it looks like Google Glass, if not ultimately a commercial success in 2014, will not only (continue to) play a large part in shaping our thinking and conversation about the next generation of computing, but inform our increasingly intertwined relationships with technology.