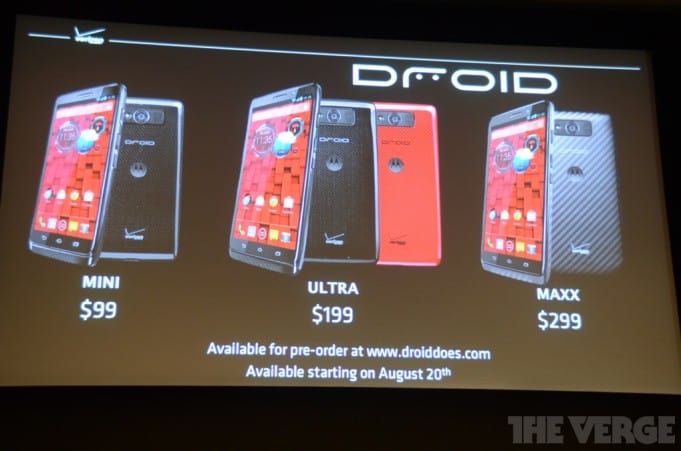 Droid still does. Four and a half years after Verizon and Motorola kicked off their wildly successful “Droid Does” campaign (2009) with the launch of the original Droid, the tradition continues. And that means svelte design, long battery life, and more than a dash of gotta-have-it.

All three new Droids, announced today in New York at a Verizon press event, are only available via the dreaded carrier commitment. Still, there’s a lot to like here, and if you don’t mind locking in for a few years with a device this trio is definitely worth a look.

How do you like your Android experience: mini, thin or with long battery life?

Each of the new models target a different buyer. The Droid Mini ($99/two year contract) and its 4.3-inch display will be of interest to those who eschew the big screen movement. If you like thin, then there’s the Droid Ultra ($199), which to my eyes with a 5-inch display and only 8.9mm thick–or “z”(as Verizon likes to call it–looks like a suitable competitor to the likes of the HTC One and Samsung Galaxy S4. Following in the footsteps of its extremely well regarded predecessor from 2011 is the Droid Maxx ($299) at the top end. Featuring an insanely ridiculous 48 hours of battery life (note: that’s about 44 hours longer than my Nexus 4), according to Big Red, the Maxx will no doubt be a favorite among frequent fliers and those who often find themselves away from power outlets.

The handsets themselves are decent. Nothing really blow away here. You get Moto’s quality of build which I’d rank right up there with HTC. Who doesn’t love a bit of kevlar?!

A few interesting things should be noted in today’s announcement.

1. Motorola is using a different chip

Instead of an ARM-based processor as seen in the ’11 range, the new Droid line-up features the “X8 Mobile Computing System” – a fancy way of re-branding a Qualcomm Snapdragon S4 Pro. Technically that means: 2 application processor cores, 4 graphics processor cores, 1 contextual computing core, and 1 natural language processor core. Pragmatically that means “24% faster CPU” and “100% faster graphics” – so these devices should have no problem serving up the latest games, videos, in addition to being able to efficiently process “touchless” voice-activated commands.

This one caught me off guard. In the eternal quest for longer battery life, companies can typically do two things: spec larger-sized battery modules, or use intelligent eco-software controls to better manage power consumption. This one fits into the latter. Active display only powers up a portion of the display. As we saw today, if all you need is a clock with some notifications, then there’s no sense lighting up the entire display. Pretty interesting stuff. We’ll have to see how well this fares in real life, but I like the direction.

3. Verizon gets to the point

2013 has seen its share of over-the-top product announcements – BlackBerry 10, and Samsung Galaxy S4 come to mind. Thankfully, low key was the MO today in NY. Verizon got right down to it. This thing was over fast. They gave us the facts, then opened up the press hall for hands on. No celebrities. No actors. No “hosts”. I do hope others follow this example…

Overall solid stuff from Verizon. No game changers. Quality updates though to the Droid brand.

Next week, a couple of big summer announcements to watch. NVIDIA is taking a risk with its portable video game system called Shield. It looks intriguing. The video game industry is in turmoil right now — or maybe that’s disruption — thanks to mobile. Then the following day we’ll see what Google has planned with its mid-range X-Phone. Me? I’m anxiously holding out for the Nexus 5.