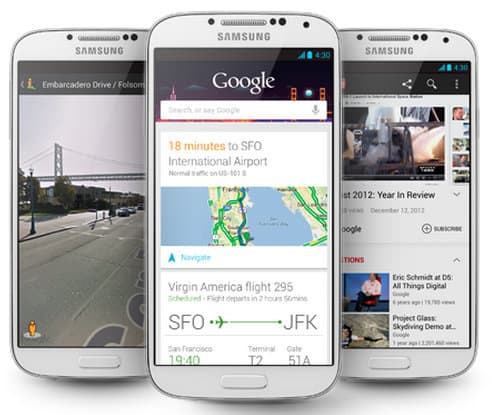 As widely (and I mean widely) reported you’ll now find two familiar faces hanging out there: the Samsung Galaxy S4 and the HTC One. Prices are $649 and $599 respectively, more on that in a moment. Both phones are unlocked, free of bloatware, and run the latest and greatest rev of Android (Jelly Bean 4.2.2).

As I wrote last week this was to be a glorious occasion for carrier-avoiding Android fans like me. Google has given us a non-Nexus option for tapping into the bliss that is pure Android. There’s, thankfully, no TouchWiz or Sense. It was the perfect time to jump ship from the Nexus 4. In fact, I had so prepped for the event I had already justified the purchase to my wife using “Charlie Accounting.”

There’s universal agreement that both the S4 and One are the epitome of Android smartphones. Reviewers note HTC’s quality aluminum design, while others extol the virtues of Samsung’s battery life, removable memory card, and swanky Super AMOLED display. Clearly, these are two well made handsets. The Verge, whose scores are quickly becoming the industry benchmark, awarded both 8.6 (out of 10) – ranking them among the best, trailing only the iPhone 5 and 4S. CNET had similar praise, yet again stubbornly refused to award either more than it’s routine 4 stars (out of 5).

So I took a step back from the chalupa.

Among the Android faithful, however, little nits emerge.

— Neither the HTC One nor Galaxy S4 are optimized for the virtual on-screen keys used in Android. Consequently the user experience is less than ideal. Most notably the absence of a menu button makes for some confusing inconsistencies.

— Google will not be pushing updates to these devices. Hence, the value proposition of the “Nexus” brand remains. Still, I’d expect them to receive faster updates than the bloatware-laden carrier equivalents.

Then there’s the price.

When I loaded up an S4 into the Google Play cart, and proceeded to checkout there was this number staring back at me: $705.79. That is for a phone. Not a laptop. Not a case of premium Napa Cab. Not a weekend getaway to Vegas.

So I took a step back from the chalupa.

I get that this is the going rate for an unlocked, unsubsidized handset. Fair enough. But to think, for about the same amount I could buy a Nexus 4 (I already own one, so this is theoretical friends), a Nexus 7 and a Chromebook. Or how about a Nexus 4, and an iPad Mini (great tablet), with money left over to enjoy lunch with a friend at the Falafel Drive In on Stevens Creek Boulevard…

The biggest issue, though, was staring me in the face.

And that’s Google’s own Nexus 4. Yes, it’s a generation behind the S4 and One. But it’s pretty darn close. Plus it’ll get updates sooner, and it has the proper on-screen keys that play so well with stock Android. The icing on the cake is the price. It’s a steal – I wonder how much longer we’ll see phones priced so aggressively? I’m not a huge LG fan, but at half the price of it Google Play edition brethren it’s hard not to give it the benefit of the doubt.

I flip flopped. No question. I’m sticking it out, for now, with Nexus 4. Tough life I know. I’m hoping the Nexus 5 is made by HTC or Sony. Regarding the X-Phone, it’s appearing more likely that will me a mid-range play for Google, so that’s a no-go for me. Still, it’ll be very interesting to see where Google takes Nexus (awaiting Nexus 7 refresh and N5 handset), X-Phone (Moto’s made in the USA mainstream play?) and Android (Key Lime Pie!) during the back half of this year.