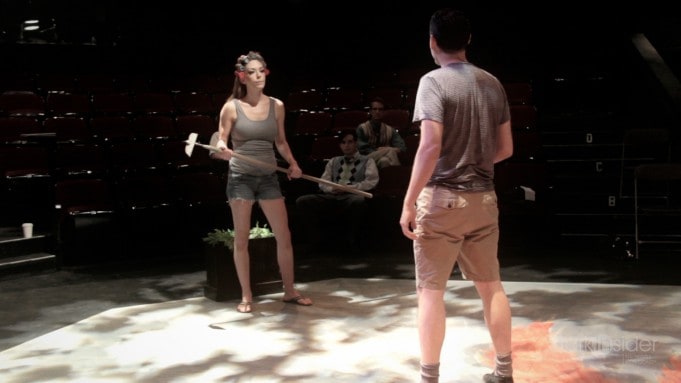 Drop that joint! Did you know marijuana will cause you to axe murder your family?

So said the US government in the 1936 cautionary film Reefer Madness. Unintentionally funny it has become a cult classic, and now made into an even campier, hilarious musical (review).

Join Loni of Stark Insider TV as she heads on set at San Jose Stage. Anything can, and does, happen. Who said Twizzlers (oops, I mean, “licorice rope”) can’t be used as a horrific stage prop?

This marks the first time (and probably last) that we’ve had an actor tell us about being “sodomized by a goatman” during a performance. More interesting still was that he had to warn his parents. Their reaction after opening night: abject horror mixed with equal amounts of pride.

We’ve been wanting to film a SI segment at San Jose Stage Company for years. So we were thrilled when it finally came to be.

Executive director Cathleen Kind and artistic director Randall King have become theater legends in these parts. Kudos to them for running a gem of a regional theater. This year they are celebrating 30 years in the business. A drug-free benefit takes place at the Silicon Valley Athletic Club on June 21st.

So, what will it be: Mary Jane or Mary Lane?