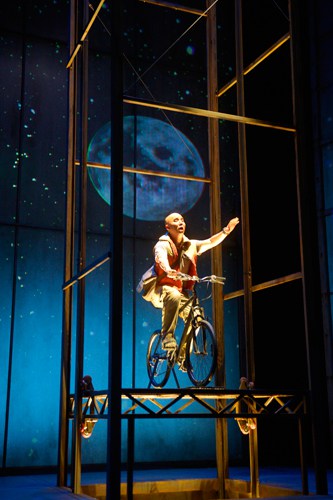 After 81 hours trapped in a Bronx elevator, immigrant Chinese deliveryman Guang has so little energy he can barely express gratitude let alone extricate himself from his would-be metal grave. Fortunately, his escape didn’t require an impromptu James Franco-like self-amputation. But like the film 127 Hours, Stuck Elevator, a musical based on a true story, we’re witness to a mind in shutdown, deprived of food and water. The result is an extraordinarily vivid “fever dream” replete with singing, dancing, and at least one Fortune Cookie Monster.

An undocumented worker, Guang’s plight garnered significant press. He was hesitant to push the 911/police button for fear of being deported as an illegal.

Then there’s Joel Perez. As Marco, the spunky co-worker at the Happy Dragon take-out restaurant, his rapping and beatboxing are pure adrenaline.

The stage adaptation of his ordeal is now enjoying a world premiere run at the A.C.T. in San Francisco. On a mild spring evening yesterday, with tourists overflowing Union Square, I took in a performance at the Geary Theater. What I discovered was an inventive, humorous, and heartfelt production.

As I’ve come to expect at A.C.T. over the years the set (Daniel Ostling) is a stunner. A character in its own right, an elevator shaft dominates the center of the stage. Graceful lighting (Alexander V. Nichols) and an assortment of panels in concert with a projection screen and lift transform the piece into various modes, depending on how blurred the lines of reality are in Guang’s mind.

Best of all are the performances.

This is as solid as an ensemble as I’ve seen here in quite some time. Lead Julius Ahn’s voice is full, hopeful. Raymond Lee, as a dealer, customer and the young Guang, has a beautifully melodic tone and gentle delivery that is wistful. Then there’s Joel Perez. As Marco, the spunky co-worker at the Happy Dragon take-out restaurant, his rapping and beatboxing are pure adrenaline; integrating them into the musical so effectively gives the production welcome bite.

Director Chay Yew keeps the pace. Who knew working with a small elevator space could result in such expansive (“Atlantic City”) and fantastical (“Takeout Man”) sequences?

This marks the first time I’ve seen an A.C.T. production that features supertitles–in both Chinese and English.

Stuck Elevator is a captivating ode to the immigrant experience. As Yew says, “I believe… the story of one American belongs to all Americans.” 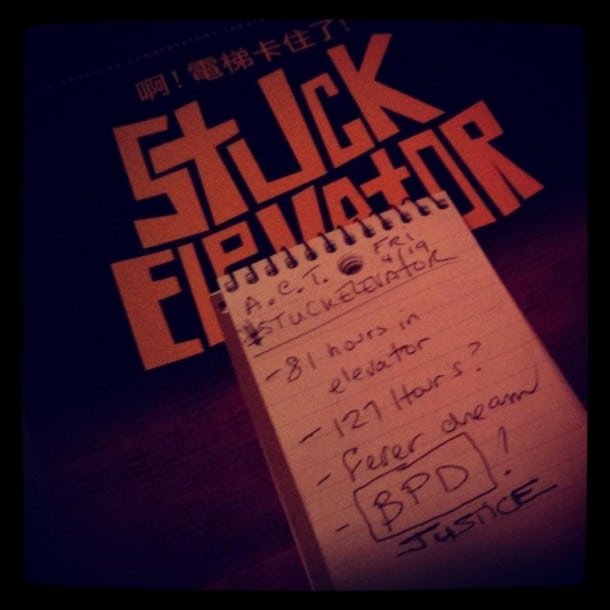 Maybe being trapped in an elevator for 81 hours isn’t so bad ->> Dreaming in a ‘Stuck Elevator’ starkinsider.com/2013/04/theate… via @starkinsider