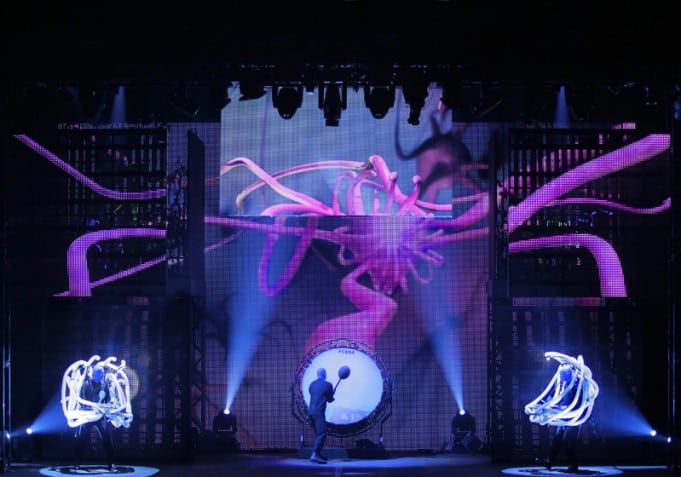 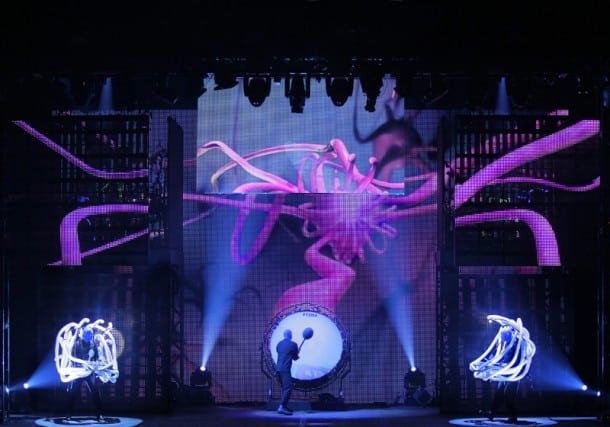 Everything I said when I caught the Blue Man Group ten months ago is equally applicable to their opening at the San Jose Center for Performing Arts. All the bits that worked so well the first time continue to entertain. If you haven’t caught the BMG before, this show is worth taking in, especially at this venue where the huge bouncing balls can reach almost all of the audience. However, if the Twinkie bit, the Christina’s World bit, the Gi-pad bit, the “Shake that Thang” bit, etc. sound familiar and you’re not a die hard fan, you might want to take a pass.

BMG excels at building group experience, be it though inducing surrender to the loud music, live video feeds of the audience, or eliciting group response through directions on LED signs.

This vague dissatisfaction with the return showing gives rise to questions as to why some shows merit repeating viewing, while others – including very high quality shows like BMG  – lose luster after a single experience. For example, if Cavalia were in the neighborhood, I’d be out the door in a heartbeat, even though I’ve seen the original show eight or nine times. My astute colleague Richard Curtis distinguished between the two, noting that whereas Cavalia takes you on a journey, seeing the BMG repeatedly is like hearing a the same joke for the tenth time. This sense of journey redeems the repeated experience and elevates it – and there’s no such redemption with the BMG.

Since a significant part of the crowd at the San Jose Center for Performing Arts included repeat visitors, there’s obviously room for disagreement. BMG excels at building group experience, be it though inducing surrender to the loud music, live video feeds of the audience, or eliciting group response through directions on LED signs. This group experience is not a bad thing. Part of why we value our entertainers so highly is precisely because they take us out of ourselves, and in doing so, bring a kind of sanity. Despite our anomized lives, public ritual – be it the hypnotic spell of the umpteenth collective rendition of “Avinu Malkenu” on Yom Kippur or losing it in the crowd at a Dead show with “Don’t Fade Away” – remains central. The catch here, is that upon a second viewing, BMG’s efforts to build that group experience  seem manipulative. The experience was rather like watching a magic show while knowing how the tricks were done. While you can appreciate the professionalism of the players, the magic goes out of it.

Now if you haven’t seen BMG, none of the above applies. You can look forward to their unique combination of ear-splitting percussion, outsider humor, tubular instrumentation, and whimsical sketch comedy. You’re sure to have a great time with rock concert moves #1 – #5, and even more to shaking that thang. These guys are pros. However, if you’ve caught their act once, you may want to think twice above a repeat visit.

This current show was designed by the group’s three creators, Matt Goldman, Phil Stanton and Chris Wink, and performed by seven interchangeable Blue Men. They will be at the San Jose Center for the Performing Arts until April 7th.