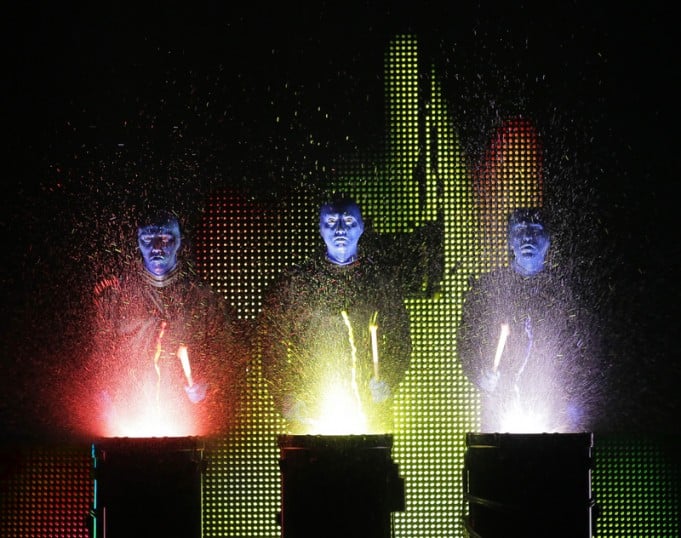 After Wednesday’s opening of the Blue Man Group at the Golden Gate Theatre, I imagined the Blue Men after the show, breaking their silence to evaluate the audience: “Yeah, that was a good house – dig the look that one gave you when you speared the Twinkie.”  “Those balls survived another night.”  Such a discussion wouldn’t be entirely out of place because the proverbial fourth wall gets a little weakened with the BMG, with the audience members on stage, Blue Men in the audience, and six huge balls punched aloft by an enthusiastic crowd. Waking up the next morning after meant pulling streamers from my hair.

If you’re the last person on earth who hasn’t seen the BMG (I was right behind you as second to last), a brief description is in order. Describing them as actors, percussionists,  body artists, comics, marshmallow-swallowers, techno mimes, painters, acrobats, social commentators or Twinkie-eaters is more or less true, but hopelessly incomplete. You’re there for the BMG experience.

I confess, the first twenty minutes of the show built slowly – interesting enough visuals, but lacking cohesion.  Not having drunk the blue kool-aid, I was ready to dismiss it as a techno version of Gallagher watermelon-smashing.  Little did I know that this was merely one step in the BMG experience as the group slowly built the tension. By the time they got to the huge-drop down GiPads to comment on our so-called virtual lives, they won me over. By the end of the evening, the Blue Men had whipped the audience into a frenzy with their combination of mind-splitting percussion and outsider humor that included Christina getting vacuumed off the painting “Christina’s World.” 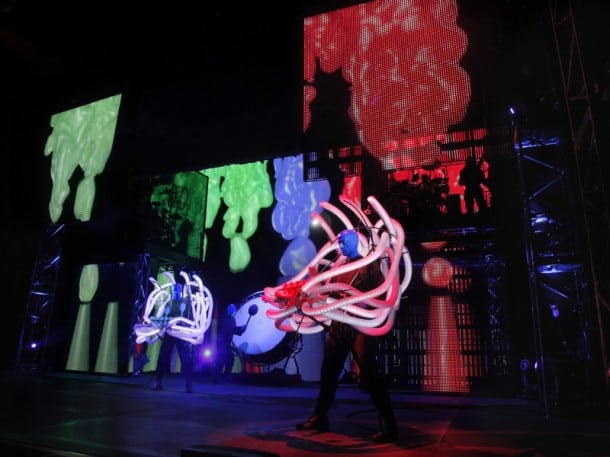 SHN has a solid track record of bringing around reliably good touring shows with original Broadway casts. Acts are never too edgy or obscure because that’s not their niche; to suggest that this might be a failing would be to miss the point altogether. BMG is their season’s best offering. Like other SHN offerings, BMG has that tried-and-true quality. Having been around since 1987, one might suspect they’re getting a wee bit green, but the act stays current with references to Lady Gaga and various rappers. While the attempts at science look suspiciously like recycled outtakes from House, overall sharp percussion and Blue Men maintain an integrity of style that keeps their fans coming. It’s this connection with the audience that lies at the heart of the Blue Man experience.

The current show was designed by the group’s three creators, Matt Goldman, Phil Stanton and Chris Wink, and performed by seven interchangeable Blue Men who are backed by a five-man group, one of whom has been performing with the BMG since 1995. They will be at the Golden Gate Theatre until June 19th. 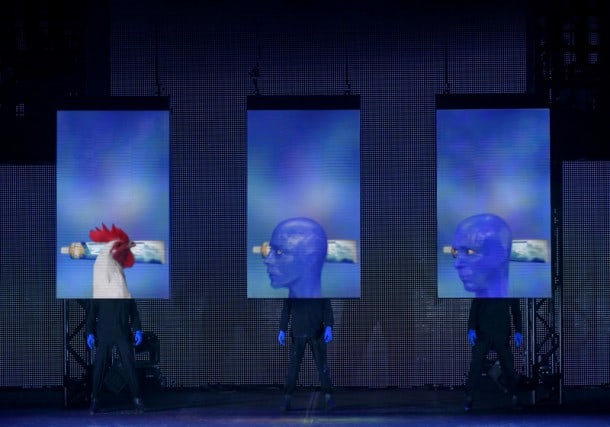