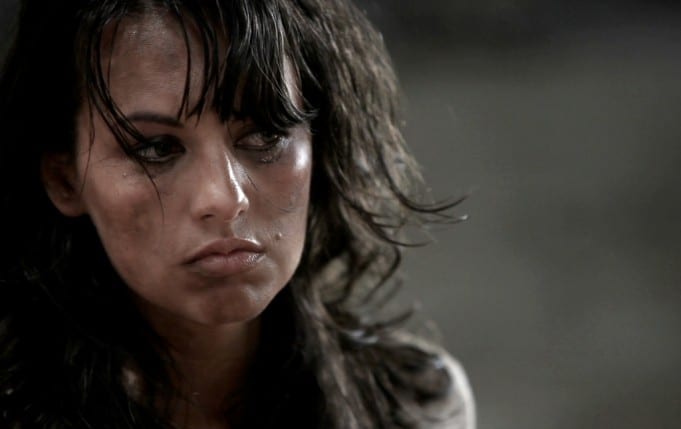 In Solace (2013), filmmaker Vandon Gibbs takes an unconventional, but effective route in unraveling the mysterious connection among six people. Much like a play, the independent film is structured in three acts. The first centers around some sort of deal taking place in an SUV between an attorney and a hustler. Later we meet a politician and a socialite whose lives although perfect on the surface are far from it. In the finale, Gibbs serves up his best, giving us a voyeuristic-like view of a discussion in a situation best described as unusual – lest I give away any secrets – between a construction worker (Russell Comegys) and his unwitting girlfriend (Dixie Light).

Call it a sit-down thriller

Best described as “dialog-driven,” Solace (not to be confused with the 2006 South Korean film of the same name) eschews special effects, overwrought music, and acrobatic camerawork in favor of scenes that build slowly based on rapid-fire exchanges between the actors. There’s not one single chase scene. Layers upon layers of each of these characters are delicately peeled away, revealing the stark and chilling truth that lies beneath. Redemption, it would seem, requires a methodical stripping of the artifice that surrounds us.

Despite the low budget, production values are quite good – though I found it interesting the filmmakers opted to leave in some of the out-of-focus shots, or shots where the (often intimate) camera was still hunting, trying to lock-in focal. Regardless, it’s truly impressive that so much conversation can be so riveting.

Particularly impressive is Russell Comegys who anchors the third act, and manages to balance eccentricity and vulnerability to perfection. At times, I was reminded of a young Mickey Rourke in Body Heat.

Sol·ace: Comfort or consolation in a time of distress or sadness

At only 76 minutes, the editors did well to tighten the story as much as possible, and retain intelligent drama.

Halfway through the screening of the film, which will enjoy its world premiere next month at the Cinequest Film Festival in San Jose, the person next to me solved the puzzle, and tipped me off. I knew there was a thread of connection, but didn’t bother trying to figure it out. Instead I prefer to let the film do that for me, and go along for the ride. Either way, the payoff is worth it. Just remember this is not Iron Man 2 or Transformers, rather this is an intimate, thought-provoking, and, yes even chilling, independent film that should be on your festival must-see list.

Solace plays the Cinequest Film Festival where it will be screened three times (SAT 3/2, SUN 3/3, WED 3/6).