Troublemaker, or The Freakin Kick-A Adventures of Bradley Boatright

Troublemaker, or the Freakin Kick-A Adventures of Bradley Boatright is a whopper of a title. It’s also a whopper of a play. Holy scat! It’s a larger than life two-and-a-half hour extravaganza that left me freakin exhausted. Narry a kouchebag in sight. Or a crotch for that matter.

The skattage to my brain is yet to be tallied.

Suffice to say, spanks to Berkeley Rep for bringing this delightfully imaginative play set in the 19mighties (with at least one reference to the 19scurvies for good measure) to the stage. If this is the kind of material we can expect out of Berkeley Rep’s new works center then we’re in store for years of top tier productions.

How on earth to describe Troublemaker?

On the one hand it takes us inside the overly active imagination of Bradley Boatright, a seemingly normal — if slightly neurotic — twelve year old. In his world, he’s a super-hero with a sidekick named Mikey, a genius who likes to use his mathematical powers to create wanton havoc at the school yard (and, for the record, shuns the sidekick reference, preferring “partner”). Pint-sized Loretta rounds out the fab trio and is seemingly freakin awesome at sourcing intel on various sundry goings on amongst teachers, parents and students alike.

What really makes this play work, however, is the language. Call it a Clockworkfreak.

All would be pexy in the world if it weren’t for super rich Jake Miller, master of the arcade, who owns a boat you know. Unlike the misfits from working class Rhode Island, he was born with two of everything – two tuxes, two “portable” 80s cell phones, and even two sidekicks. Why on earth is he masterminding a conspiracy to set-up his dad with Bradley’s mother in an effort to create some sort of boyfriending-girlfriending thing?

Then there’s the domestic reality. The one where mom (Jennifer Regan) does everything to please her confounding 7th grader — including offering to buy him a “GoBoy” if she’ll go with him to the mall — only to fail miserably in her efforts to shower him with love and attention. A fatal car accident involving Bradley’s father could hold the key to her son’s inability to socially connect with his schoolmates, and blame his mother.

Cartoon caricatures superimposed with a harsh reality intertwine to create a fascinating presentation. What really makes this play work, however, is the language.

Playwright Dan LeFranc has created an altogether new universe, with unique words, hipster expressions, and a lot of, well, a lot of… freakin freak. The first act immerses us in a 19mighties version of a world where super-hero Bradley is trying to evade Crotchs, A-Holes, homeless people (pirates with rats on their shoulders), Nazis, his Mom and flamboyant nemesis Jake Miller – all by hatching a plan to escape from Rhode Island and head to French Canada (“the wild, wild West of the North, North East”).

By the middle of the play, though the actors are speaking English, it’s really some new variation of Freaklish, and remarkably we’re totally in tune with its cadence.

There’s a twist, and the rare play structure (three acts, two intermissions) affords a good bit of effective, creative whiplash. Aren’t we just architects of our own circumstances?

Performances are spot on – something I’ve begun to take for granted when headed to Berkeley Rep. In particular Gabriel King in the lead role is flat out phenomenal. There’s a solo scene later in the play involving some creative physicality that is simply outstanding. Ditto his arch enemy Jake Miller played by Robbie Tann. Here’s a slick villain you want to root for – he’s got all the best lines, suave delivery, and a generous heaping of mischievous like-ability to make us savor his every scene entrance.

Troublemaker is about as good as it gets; a fresh, innovative production that sparks the imagination. Despite its comic book pretense there’s a sharp, no-holds barred edge to the writing. Ultimately we’re reminded that we don’t necessarily need to flee to French Canada (Poutine, hockey, syrup and all) to find meaning in our lives.

Now, being that this is Silicon Valley, I need to get back to some good old squealmaking.

Freak! Friggin’ A. This show kicks Freaking A. #troublemaker @berkeleyrep 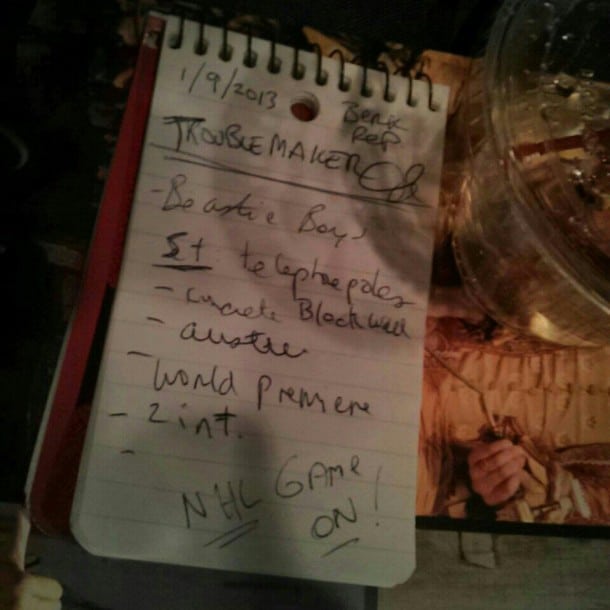