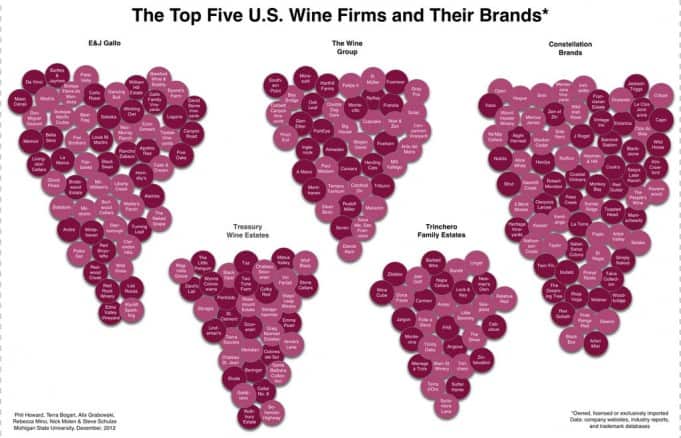 A new study out of Michigan State University reveals that over half of the U.S. wine market is owned by just three companies. Combined, E&J Gallo Winery (22.8%), The Wine Group (15.9%) and Constellation Brands (12.8%) account for 51.5% of the market (2011 data) according to the researchers.

The most interesting graphic that caught my eye is the one seen above and has been making the rounds on the Internet among those curious about wines, and brands.

While it may not come as much of a revelation to those that follow the industry, or check the labels carefully on the back of their wines, many may be surprised to learn that the same Robert Mondavi and Woodbridge share the same parent company. Or that Bronco Wine Company, makers of Two-Buck Chuck (Charles Shaw) account for 3.5% of all wine sales in this country. That there is a lot of plunk!

After studying the chart for a few minutes I came to the realization that the wine industry does a pretty darn good job of spinning up sub-brands and marketing them with wholly unique identities. Of course that’s largely the point of having a portfolio of brands. Some can be targeted at premium buyers who frequent boutiques, while others can be churned out by the jug, box, and average size above ground swimming pool, and found vying for space at the local CVS.

Though I don’t have exact numbers or a report to reference — I imagine there are several out there — I suspect the industry snapshot as captured above is similar, at least in terms of control, to other industries. The auto industry is an easy example, with the Big Three (Ford, Chrysler, GM) controlling domestic production. The consumer computer industry has the four horseman in Amazon, Apple, Google and Facebook. And, as for quasi-reality star, quasi-real estate mogul, quasi-politician… well, okay, the Donald has the market cornered. Monopoly assured.

SEE: Harlan and the Philosopher

The report indicates that the wine industry is far less concentrated than the soft drink industry where two firms (Pepsi-Cola and Coca-Cola) control three-quarters of the market:

“Part of the reason wine remains far less concentrated at the brand level when compared to beer and soft drinks is that wine distributors do not usually stock the shelves directly, and stores have retained more control over their selections.”

Here’s another fun infographic the Michigan team, which was led by Professor Philip H. Howard, put together: 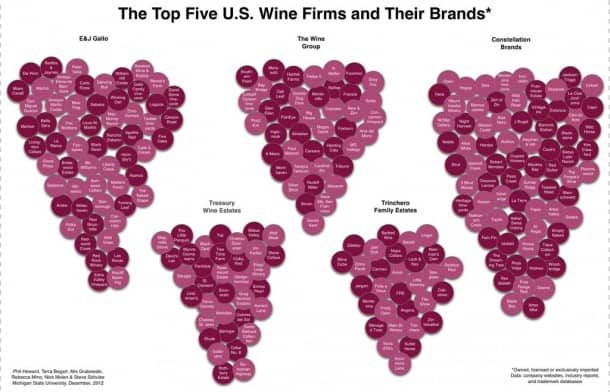 The team also surveyed local stores (around Lansing, Michigan), and found that the top three varietals (excluding blends) stocked were:

And Gewürztraminer? Who… what… ?!

As an aside, am I the only one shocked – positively shocked – that we don’t see sexy wine brands like Scarecrow, Harlan, and Screaming Eagle on any of this research?