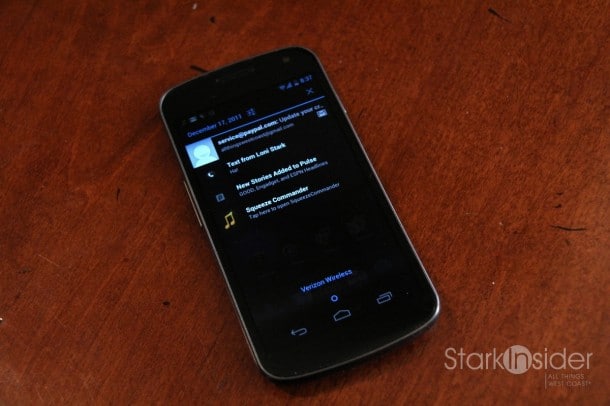 HTC’s flagship Android smartphone is available today from Verizon. For $199 (with requisite two-year contract) it’s hard to go wrong, especially for those that like their phones super-sized. Featuring a well-received 1080p 5-inch display, the DNA is an Android powerhouse, even “sick” as some have described it. And, gosh darn it all, it has LTE, little sisters!

Though Samsung’s Galaxy S III and Note 2 are potentially more logical comparisons, many will likely be cross-shopping the DNA with the LG Nexus 4, Google’s latest flagship “pure Android” handset. Both being high-profile launches (one by Google/LG, the other by Verizon/HTC), you can expect big-budget marketing to continue through the holiday season. I would be one of those who have devoured reviews and news about both devices – not only because I wanted to upgrade my Galaxy Nexus (2011), but also because the DNA and N4 give us a glimpse of what to expect in the Android universe for 2013 (hint: it’s looking pretty spectacular… Galaxy S IV anyone?).

In the end I went with a Nexus 4, though the DNA was within a hair of getting my final vote. Here’s 5 reasons why the N4 beat out the DNA in my quest for a GNex replacement:

Neither the DNA nor the Nexus 4 have best-in-class battery life. Based on most tests, however, the DNA really struggles to get through an average work day. Blame LTE. Blame that beautiful 5-inch screen. Or just Blame HTC for continuing to not invest enough R&D into matters of endurance. Granted, there is some controversy across tech blogs with respect to the accuracy of some of these tests; how, for example, can the S III receive better marks for battery life when it doesn’t last as long as the DNA on some tests? Regardless, neither handset has a removable battery, so if you’re away from power outlets for extended periods definitely think this one through.

Yes, in the words of White Snake, “Here I go again.” If you flat-out must have the latest updates from Google, go Nexus. No two ways about it. The Galaxy S III which came out this summer is finally getting Jelly Bean. Nexus users have had it for months already. Meanwhile the N4 already ships with Jelly Bean 4.2, the most recent version of Android. DNA ships with 4.1.

One seemingly minor feature that I’ve come to appreciate on the GNex (and hopefully the N4 when I finally get to it after returning from this trip to Loreto Bay in the Baja) is the multi-colored (RGB) notification light. Facebook messages get a blue flashing light. Google+ red. Texts/Google Voice green. Email white. It might seem insignificant, but if you’re in a meeting or on a call, it’s useful to know if the alert is worthy of your attention right that second. Unfortunately, though the DNA has a notification light on both sides of the phone, it’s notification light is not RGB. Is that a big deal? Maybe, maybe not. But for me, it’s a little thing that matters.

Sure, go all Madonna on me if you like. I prefer softkeys. Google has finally got it right (though it needs to rethink their orientation on the Nexus 10 tablet), opting to use three simple navigation keys on Nexus devices: back, home, apps. And, yes, the softkeys do take some screen real estate, whereas the capacitive buttons on the Droid DNA do not (though they’re located precariously close to the bottom of the bezel). When they need to — watching a video — the softkeys disappear. Plus, the overall aesthetic of the handset looks better. That’s a personal preference, of course. I have no qualms with HTC’s slick red/black design motif and “micro-grills” of the DNA; still, I’m always in favor of softkeys and believe they’re the way forward in smartphone design.

and, finally why the N4 crosses the finish line as the all-round best Android for Q4 2012:

5. Escape from the Carrier

Nexus 4 is the best smartphone deal on the planet. $299 (8GB) or $349 (16GB) for an unlocked flagship smartphone is simply unheard of. The freedom to run it contract-free is icing on the cake. I used to cycle my phones every two years – though, believe it or not, I ran my OG Droid (2009) for 30 months before finally upgrading to a GNex. Now I can’t imagine not cycling every 6-12 months. With 1080p displays becoming the norm, we’re likely to see some lust-worthy handsets at CES in January. Meanwhile, the secondary market has proven strong enough (to my surprise) to allow flipping of handsets without too much of a financial hit. I sold my GNex for $290 on eBay, and was able to buy an 8GB Nexus 4 for only $299. Being able to swap out sim cards is a bonus for two reasons: international travel, and when testing multiple devices (the new HSPA+ Nexus 7 for example) or using older devices (I use a SII when traveling in rugged environments so as to not risk damaging my daily driver).

You had me at LTE

Got it. If you must have LTE, then the DNA is a tantalizing proposition, especially at only $199 – like the N4 an incredible bargain. T-Mobile’s HSPA+ 42 has been perfectly fine (and in some cases downright impressive across parts of the San Francisco Bay Area). Then again I don’t stream movies on my phone. I use it for Gmail, calendaring, music, Facebook, Twitter, Yelp – the usual stuff you do on the run. For that, HSPA+ is more than adequate.

Another reason the DNA might make sense is if you’re already on Verizon, and don’t mind locking in for another two years.

For the above mentioned five reasons, I’m willing to go down as saying the LG Nexus 4 is the best Android — maybe even the best smartphone period — on the market (sell-outs notwithstanding). Of course, that will all change in early 2013. Being unlocked, though, I’ll have the freedom and geeky bragging rights to jump on the next best thing when that time comes.