Even though I’ve been coming here to Loreto, Baja for over six years I’ve not yet once gone fishing; which is a fairly embarrassing admission, given that the Sea of Cortez is one of the most famous places on earth, stock full of incredible marine life. Loreto fishing tournaments draw crowds from outside of the country, and I’ve been told that they’re among the most competitive, and exciting ones around. Fortunately I have dived here, and lived to tell about fantastical visions, my James Bond sendup, and – OK! – attacks of claustrophobia.

So when our Loreto Bay neighbors from Edmonton (7F there, 85F here – yes, it’s worth the drive to Loreto) invited us to join them for a morning of fishing we jumped at the chance. Seeing the sun rise above Carmen island (one of five islands that sits off the coast of Loreto) alone is worth the early wake up call:

Our guide netted some live bait (small fish swimming about the shallow water near the marina) and placed it in a wet bin at the back of the panga:

Here we are heading to sea (I’m behind the camera):

For the first hour or so not much happened. Well, aside from conversation. Fortunately there is a 360-degree panorama of endless, pinch-yourself-too-good-to-be-true beauty. I’ve said it so many times, and risk sounding like a broken record when I try to describe what my eyes see when bobbing up and down on the Sea of Cortez; adjectives fail me, so instead imagine taking some of the best landscape CGI effects– a lively blue sea with schools of jumping dolphins, towering mountains that stretch across the horizon as far as the eye can see, white sand beaches — and then mashing them up into a real-time greatest hits montage; unveiled in real-time right before your very eyes. This is what IMAX might look like in 2020.

To maximize your catch potential, here’s a quick summary of the fishing season in the Loreto area.

Unlike fly fishing I suspect there’s somewhat less artistry involved in casting. Our guide simply flung the lure (a hook with the live bait) about ten to twenty yards into the water. From there I slowly let out some additional line. I could feel some nibbles. Occasionally the line would run — zzzzzzzzzzz goes the reel. More often than not a small fish not quite big enough to take the entire bite into its mouth had bitten part of the live bait and swam like mad. Shortly thereafter the line would again go limp.

Again, not much happened.

A few hours passed. We put-putted, trolling the lines. And… nothing.

Our guide reminded us of the power of positive thinking… “You can do it!” Patience, he reminded us, was the difference between going back to shore empty handed versus bringing back a week’s worth of dinner for family and friends.

Fortunately our hosts Jenn and Mike had found a guide/captain that knew his stuff. After spending 30 minutes trolling around the Coronado Island with he cranked up the Mercury, and headed to another spot.

Finally, after a few hours of trying our luck with no results, Jenn’s road sprung to life. Zzzzzzzzzzz. She tugged the line with her fingers, and the resistance was unmistakable  as was the lovely bow in the rod. At that point, she locked the reel. The battle then begun. These fish — Dorado mostly at this time of year, with some possibility of Yellowtail if a sinker is used — are about 30-40 pounds. Not large enough to create an epic struggle between human and fish of the six hour variety the guides love to tell us about. Instead, the process on this day took about 10-15 minutes, and involved pulling the rod up high (so there’s that iconic arc of tension) and then slowly letting it down (towards the boat/water) while reeling in the line. This technique minimizes sudden forces that might otherwise snap the hook out of the fishes’ mouth.

Once the Dorado was close enough to the panga, our guide hooked it with a short pole, and hauled it aboard. There’s a follow-on procedure involving pliers to the brain (both sides) that some may not wish to witness.

Here’s Loni “sushiweakness” posing with a Dorado. I think she’s about to take a chomp out of it:

By the time I caught mine, there was plenty of activity in our boat – three lines were simultaneously singing. It would appear that we had discovered a hungry school of Dorado.

Be sure the fishing operator provides you with a fishing license. This ensures you’re legally able to fish in the Sea of Cortez. 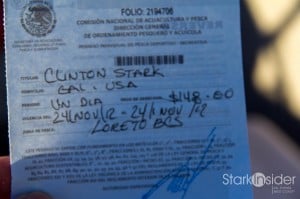 Reeling in the Dorado was not difficult, though I was reminded out how much force a small fish is capable of generating.

At lunch hour, we headed to the beach for Coronado Island to cool off, enjoy a cerveza, and take in the vistas:

By 1pm we had arrived back at Loreto Marina. Final catch: 4 Dorado.

Our guide filleted the fish right there on the back of his boat. It was quite a sight to watch his precision and expertise in neatly slicing and dicing.

[SEE: Scuba Diving in the Sea of Cortez]

My wife Loni — daring fireball that she is — even sampled a piece boatside – a sushi fantasy of hers fulfilled.

Mike was savvy enough to have a special vaccine freezer hard-wired into the electrical of his SUV; the mobile freezer ensured our catch would stay fresh while transported from the town of Loreto across Highway 1 back to Loreto Bay (about 15 kilometers).

Our panga costed $300 for about half-a-day of use for two couples. Some outfits are more expensive, some less. It depends on what’s included. Be sure to shop around.

Loni suggested we take one of the Dorados to Domingo’s Steakhouse in town for dinner. This is one of the beauties of a fishing village, you can bring your own fish. After a few hours of R&R back at the casa, we headed into town, and enjoyed a sea-to-table feast not soon to be forgotten. The Chef at Domingo’s prepared the fish four ways: sashimi, grilled, breaded and fried, and in a traditional Mexican style with vegetables:

We all agreed the fried fish was the best – it was full of flavor, yet still moist enough. Later Domingo himself surprised us with a special pour of some hand-made (foot-made?) wine (sherry, actually) he had procured earlier in the day in San Javier, where the tradition dates back some 350 years:

It was very small production wine. In fact, he had to bring his own bottle (which you can see at the left on the table in the photo above) so he could transport some back from San Javier to Loreto (a twisty, mountainous two-hour drive across narrow dirt roads). I’m not generally a fan of dessert wines. I often find them too syrupy  thick, sweet. But this sherry was a perfect way to end our meal; smooth, lots of nut flavor, a fantastic finish.

And that was our day of fishing on the Sea of Cortez in Loreto, Baja California Sur. Dreams do come true. (even if accompanied by sea sickness by someone who will go unnamed…)