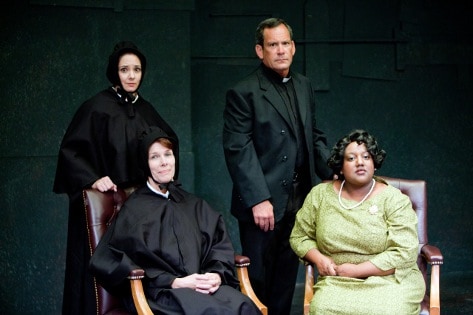 John Patrick Shanley’s Tony-Award winning play Doubt, A Parable opened over the weekend at Coastal Repertory Theatre in Half Moon Bay, and demonstrates that certainty can stifle the truth.

Quite frankly, the playwright provides in the program’s prefatory notes a cogent and revelatory analysis of his own single act play that surpasses anything that a critic can offer.

With all the high-mindedness evident in his preface, however, one could lose sight of the fact that his work is one entertaining yarn, with the numerous intense verbal exchanges bearing more than a passing resemblance to a classic courtroom drama.

And the assured direction of the preternaturally talented Martin Rojas Dietrich doesn’t fail to exploit that essential aspect. He stages many scenes in a set conceived ostensibly as a school principal’s office (but in effect serving as a courtroom), with actors seated and reciting their lines while facing the audience – as if placed on a witness stand testifying before a jury.

But this taut, engrossing mystery does not confine itself to the cerebral, with more inspirational and personal interludes taking place in the remaining two sections of the artfully imagined triptych scenic design (designer Bob Mitton). Each set is thematically inspired, featuring a divine church pulpit with iconic, stain glassed windows, and a human-centric, life-affirming garden.

Michael Lederman, artistic director of the company, is simply superb as Father Flynn, the benevolent parish priest and teacher suspected of having an inappropriate relationship with a young student. His eloquent, exalted sermons are delivered to perfection.

Sister Aloysius Beauvier (Nancy Martin), the stern, conservative and distrusting Catholic school principal, is the antithesis of Father Flynn and is on a mission to destroy him.

Ms. Martin is frightfully (and frighteningly) good, evincing an unblinking, zealous certitude without an ounce of compassion. She’s totally convincing in a role that personifies both judge and prosecutor. It’s certainly no coincidence that she’s dressed in a black habit that could be mistaken for a judicial robe (costumer Sue Joswiak).

Kateri Rose is so marvelous that one can’t help but wonder if she’s a casting coup or an extraordinarily gifted actress. She simultaneously oozes an endearing naïveté, affecting warmth and an inner strength as the young Sister James – her doe-eyed and startled expressions are priceless. It’s hard to imagine a better portrayal.

Alexaendrai Bond as Mrs. Muller, the mother of the boy in question, completes the small cast. Her single scene is short and exposes the play’s weaker development of its racial theme, but her compelling performance brings credibility to what is otherwise an unbelievable character.

Coastal Rep has certainly ended its season on a high-note. Bravo!