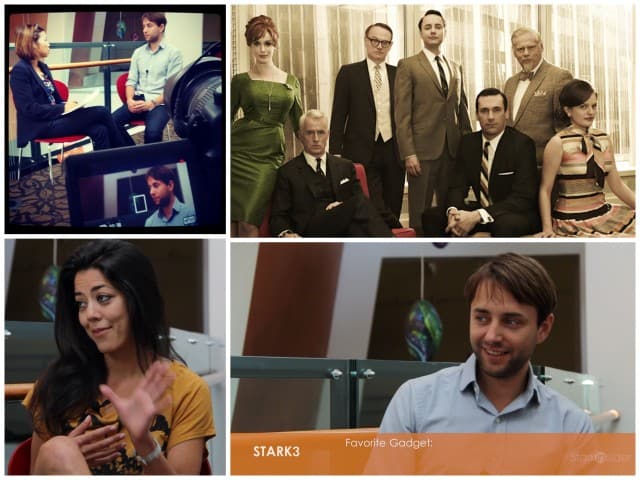 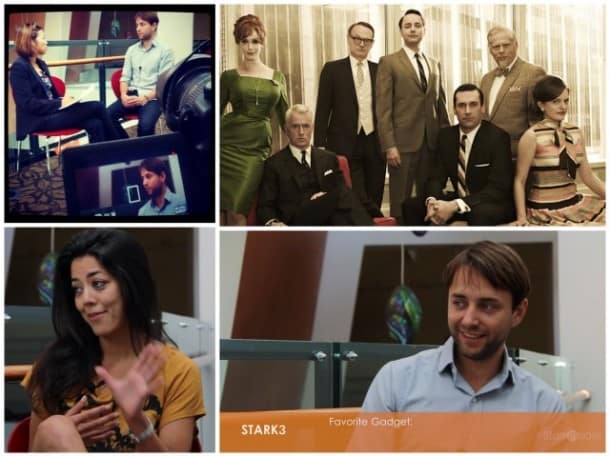 I didn’t know what to expect when I met Pete Campbell for this Stark Insider TV interview. Would he be the slick, ambitious, smooth talking ad man we all know (and love) from Mad Men? Or would I discover the accomplished thespian, a guy who is often described as intelligent and thoughtful during interviews — though oft slightly crazy? I’m happy to report actor Vincent Kartheiser, who is in San Jose to star in the world premiere of The Death of the Novel, is all of the above, neatly wrapped in an as-of-now unshaven package.

Part of the alignment with the character he portrays on Mad Men is simply because, as he tells me, it’s him playing the role.

“It’s character choices I’ve made in my brain so in that way they both come from me,” he explained when I asked him to compare and contrast Pete Campbell and his new character Sebastian that he’ll bring to life on stage this week. “This season Pete Campbell did deal with the other side of success. That ambition is something Sebastian does not have. He’s anti-success. Pete Campbell longs very much to be admired by his peers. respected by his elders, and to have a firm place in the social world of New York City. Whereas Sebastian obviously cares nothing for that.”

Pete Campbell longs very much to be admired by his peers. respected by his elders, and to have a firm place in the social world of New York City. Whereas Sebastian obviously cares nothing for that.

Kartheiser doesn’t see The Death of the Novel as his return to the stage as I suggested. “You don’t really leave the stage,” he says. The 33-year old native of Minnesota as been acting as long as he can remember. He frequently appeared in productions in Minneapolis at the Children’s Theatre Company and the esteemed Guthrie Theatre. In 1993 he earned a small role in Untamed Heart, and has since carefully worked his way up the film and television ladder. “It’s kind of like pushing a big ball up a hill,” he said when I asked him about his career. “Once you get momentum you don’t really want to stop and leave it. Because it’ll just roll down the hill.” He’s appeared alongside Justin Timberlake (In Time), done voice over work (Rango, L.A. Noire), and has two films hitting the big screen this year (Red Knot, Beach Pillows).

Now with the success of Mad Men, he has a “resting play” that affords him the ability to take on projects that might not make a huge splash in the L.A. or New York scenes. In fact, playwright Jonathan Marc Feldman loves the show so much that he wrote The Death of the Novel with Vincent Kartheiser in mind for the lead role. Now after years of development, and even a successful Kickstarter campaign to raise funds for the sets, the play will open at the San Jose Repertory Theatre on September 5th. The play centers on a depressed novelist holed up in a Manhattan apartment, cut off from the world, fighting writers block.

Here’s some of the outtakes from my interview. It all started calmly, professionally. From there it went quirky, then sexy, then just flat-out crazy. In other words: it was a great interview.

Co-star Vaishnavi Sharma, who plays a sexually charged and mysterious Saudi woman, also couldn’t erase the image of Pete Campbell from her mind as he stared her down during difficult auditions in New York. “I knew he was going to be in the room, and like I said for five years [I watched] every show. I was like, ‘Wow! I’m gonna meet Pete Campbell!'” she says recalling the callback where she first met Vincent Kartheiser. “I was playing it cool, walked in and shook his hand and said ‘Nice to meet you’ I wasn’t like an adoring fan or anything, or at least I pretended not to be.” They then performed a scene from the play, and something happened that Sharma suspected might’ve eliminated her from contention – watch the interview to find out about that near fiasco (hint: it involves removing high heel shoes, a balancing act, and possibly some unwanted physical contact).

As always, we dig to the bottom of the story to get the scoop, and play the “Stark 3s.” Find out Vincent’s favorite adult beverage (this might be the most obvious answer in history), food, and gadget. And, yes, since there’s most definitely an undercurrent of Fifty Shades of Grey during our meeting at the SJ Rep, I just had to ask Sharma for a quit tip on the art of seduction.

WATCH: Vincent Kartheiser of Mad Men discusses “The Death of the Novel”