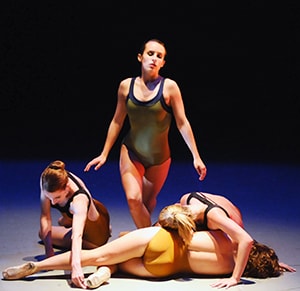 Jamie Ray Wright and the DanceWright Project have come far since I first reviewed them. A year has passed since this first review, and DanceWright has continued to mature. Lest there be any doubt, their current presentation of Beauty places this group firmly on the map in the bay area dance world.

I recently asked Wright about his take on whether the dance world suffers from the same fragmentation seen in new music, which trends toward increasingly specialized interests and smaller, albeit fiercely loyal audiences, and has never been able to entirely shake off its academic feel. Wright freely noted that roughly 40 percent of dance audiences are other dancers, which concurs with Jennifer Homan’s observation that dance today has “shrunk into a recondite world of insiders who talk to each other.” However, very accessibility of his presentation belies Homan’s larger assertion that there’s a disconnect from the public.

Thursday’s program opened with Sadness in Glass. Performed by four dancers, Sadness has a classical feel, without actually being so. Wright’s penchant for angelic forms seems at work here, with dancers in white. The string quartet by George Peter Tingley had an exquisitely beautiful, autumnal feel.

Dexandro Montalvo Daily Groove was next on the program. With an entirely different look and feel from what preceded it, one began to sense the overall arc of the evening’s program building.  Performing to intensely percussive music, the dancers’ sharply articulated moves were fun to watch. Although this dance was characterized as a work-in-progress, it was so professionally executed and accessible, further work  might only risk what this slightly tongue-in-cheek piece so expertly accomplishes.

The evening continued to build with DAC PAC’s To be Loved and Copious Dance Theater’s Ix Chel. Of these two, the former was the more gratifying, even though technical flaws were apparent.  Danced to music that emphasized repeating downward scales, the dancers often lacked the synchronicity that would have given this a more harmonious feel. That said, there were moments in which they moved in such complete union with the music that the piece transported the audience.In comparison, Ix Chel had an intentionally cold feel, as the dancers seemed remote from each other and from the audience. Performing to largely oscillating tones, they moved expertly and their intent was always clear. This clarity of intent was essential because much of the dance was performed so that the dancers never directly faced the audience, remaining with heads down, or avoiding full frontal exposure.

The high point of the evening, to which everything had been building, was Beauty. While the dance does open with a sleeping beauty, performed by Leda Pennell, providing an indirect reference to the other Sleeping Beauty that is so emblematic of ballet in general, this Beauty was derived from the Anne Rice Sleeping Beauty trilogy of erotic novels.  When chatting with him, Wright pointed out  that “the theme of this dance is how you can free yourself to be powerful by humility.” His roots in a military family inform this work, as he pointed out that the military emphasis on obedience allows you “to find your own center  in being a powerful leader in your own right.”

As the first notes of six-movement “Beauty Suite” by Renee Baker sound, we see lead female sleeping on a couch. She is awakened by dancer Ismael Alvarez, who leers over her. They begin a pas de deux like no other, as she trembles in fear, as this absurdly large man binds her hands and slaps her. Masked minions recline and egg on the action. I’d love to see this piece again as the reactions of these minions to the principal dancers are worth  additional attention. Joined by a dominatrix clad in purple, the drama plays out until Beauty throws down her ropes and finds her own strength.

Beauty was so intense that the two pieces that followed served as step down transformers. These included Weidong Yang’s Metal: The Fourth Element and a closing piece by the DanceWright Project entitled Solid Rock.  The former was a martial arts piece performed by ten male dancers to largely repetitive music. The latter was danced to electric guitarist Tozzi, who shared the stage.

This brilliantly constructed program makes me hopeful about dance in the Bay Area.