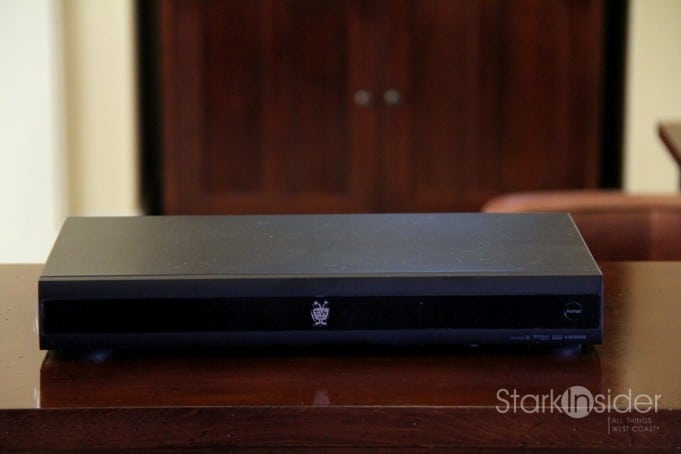 TiVo Premiere XL4 ($399 / 300 hours HD / 4 tuners / backlit remote / THX certified)
PROS
+
Friendly, intuitive interface. PiP allows you to keep watching while reviewing program schedules. Access to streaming services including Hulu Plus, Netflix, Pandora and others.
CONS
–
Set-up takes longer than expected. Though pretty, the interface lags in comparison to Apple TV or Roku. Requires a cable or satellite subscription (over-the-air antenna is also an option). Compared to the competition, TiVo is big and requires more space under the TV. To use wi-fi, a small, kludgy USB adapter is required. Requires $14.99/month subscription in addition to your existing service (or a $499 lifetime payment).
VERDICT:
"Worth a Look"
TiVo is still a friendly face, and the King of DVRs. If you must record live events such as sports or concerts, this is a great choice. But the broadcast world has forever changed thanks to the cloud, and streaming. Apple TV, Roku and even the PS3 or XBOX360 will be better choices for most.
Review by Clinton Stark

UPDATE #1 8.16.2012: Fortuitous timing! TiVo today just unveiled the new Premiere 4. In addition to a lower price ($250) it includes most of the features of the top-end Premiere XL4, including the ability to record 4 programs at once.

TiVo has become synonymous with “DVR” (digital video recorder). So much so, that just as other iconic brands — Xerox, Kleenex, Windsurfer — have defined their respective spaces over the years TiVo has become the gold standard when it comes to recording shows to watch later. Thankfully, it all but killed the VCR. Time shifting has been a favorite American pastime for years now. Now on-demand has made it even easier to watch what we want, when we want. Television schedules are slowly becoming antiquated curiosities, replaced instead by a fire-hose of options for streaming movies, music, television shows, and videos. This is no longer 2001. In a world of Netflix, Amazon Instant Video, Apple TV, Hulu and YouTube, is there still room for TiVo? The company was generous enough to send us a TiVo ( Premiere, $149) and here’s my take on a reunion with an old friend.

Opening the box brings instant recognition. Virtually nothing has changed over the years- by gosh, TiVo buddy, you’ve aged well! Size-wise (16.5″ W x 9.7″ D x 2.4″ H) it will suit those who like to stack their home theater components. By comparison, Roku seems diminutive. That extra size allows TiVo to house a hard drive which can store up to 75 hours of 1080p HD video (you can store more by reducing resolution, but why on earth would you want to do that?!). 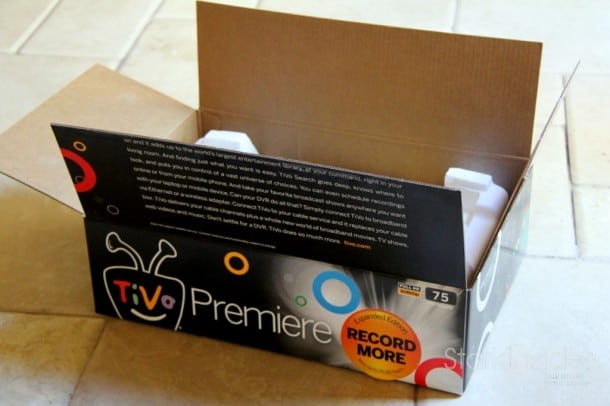 Installation was trickier then I would’ve liked. In the end it took close to two hours. If you have a cable box (AT&T U-verse and satellite are not supported by the Premiere series), you simply remove it from your system altogether, insert a cablecard into the TiVo, and you’re ready for the rest of the setup process. I’m one of those guys who cut the cable. I subscribe to Netflix, and Amazon Instant Video (Prime), and routinely rent HD movies from services such as Vudu. Instead I hooked up an HD antenna so I could receive OTA signals. This worked fine for testing purposes, and I was able to pull down local stations, and plenty of Chinese/Latino stations as well. 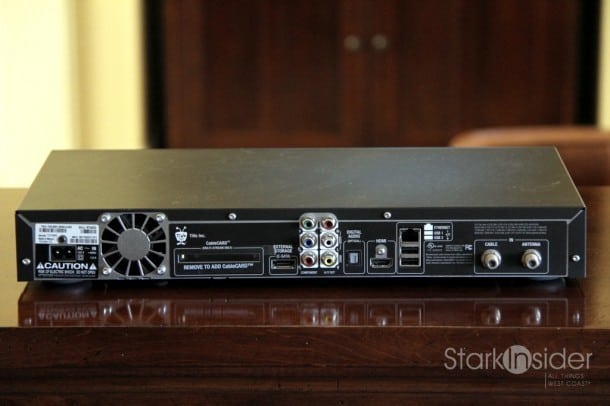 Once it knows your setup (Comcast, OTA antenna, etc.) TiVo then chugs away and downloads the appropriate guide information including channel line-ups, program schedules and information. This takes far longer than I expected – about 45-60 minutes. At this point, grab a coffee and kill some time on Facebook, or read up on Romney’s latest gaffs, or Obama’s latest “tirades.”

Just when I thought I was done, and ready to use TiVo, a system update began to install. That required a reboot, and a repeat download of the program information. 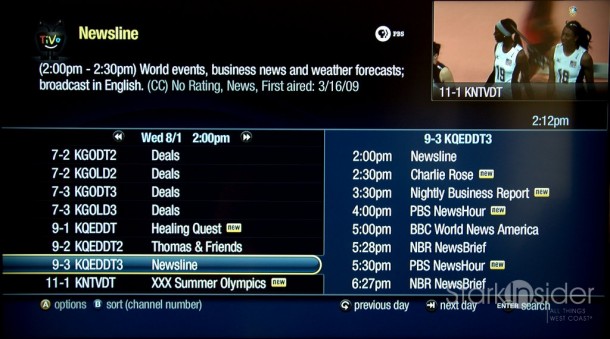 The interface looks pretty much as I remembered it. Which is a good thing. Pushing the cute TiVo button at the top of the remote takes you to the main menu where you can view recorded material, review show schedules, and dive deep into setup options. One downside: the remote uses IR (infrared) meaning it requires line of sight, and will not work in cases where the TiVo is behind a cabinet door.

Also, you can find apps here such as Netflix, Hulu Plus and YouTube. 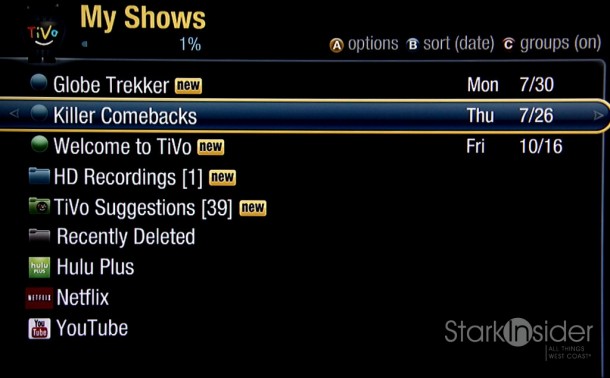 Cute sounds abound. When you push a button, say a “thumbs up” for a show (Mad Men) you like, you get happy, ping-ping style confirmations. There’s plenty of warm and fuzzy. You can’t help but smile when using TiVo.

Surfing channels, and discovering programming is a breeze. Here, years of research really pays off. It’s no doubt the company’s wheelhouse. TiVo learns what you like, and recommends related programs it thinks you’ll also enjoy.

In addition to the traditional DVR functionality, you can also setup TiVO to browse your photos (Photobucket, Picasa), and even to stream music from services such as Pandora, Rhapsody, and Live365. As a family room media hub, this breadth of functionality begins to approach what you might find in a video game console such as the Sony PlayStation 3, and Microsoft XBOX360.

I watched some of NBC’s Olympic coverage, and was floored by the signal quality. No complaints here. I like that while I navigated programming schedules, and explored the menus, TiVo kept a small PiP in the top right of the current broadcast.

Slick TiVo apps are available for the iPad, iPhone and Android smartphones and tablets which will appease command-and-control couch potatoes, even those on the go who need to remotely schedule a program.

All of this is well and good, but here’s the question again: in this new world of apps and on-demand service, does TiVo still make sense?

I propose yes and no.

If you subscribe to Comcast or other compatible cable provider then a TiVo will clearly bring out the best. In particular if you want to record live sports, concerts, or other events, then this is the best game in town- still, after all these years. I can’t think of any other DVR-like product that comes close, lest you head down the DIY home theatre PC path.

A lot of us, however, have cut the cord. 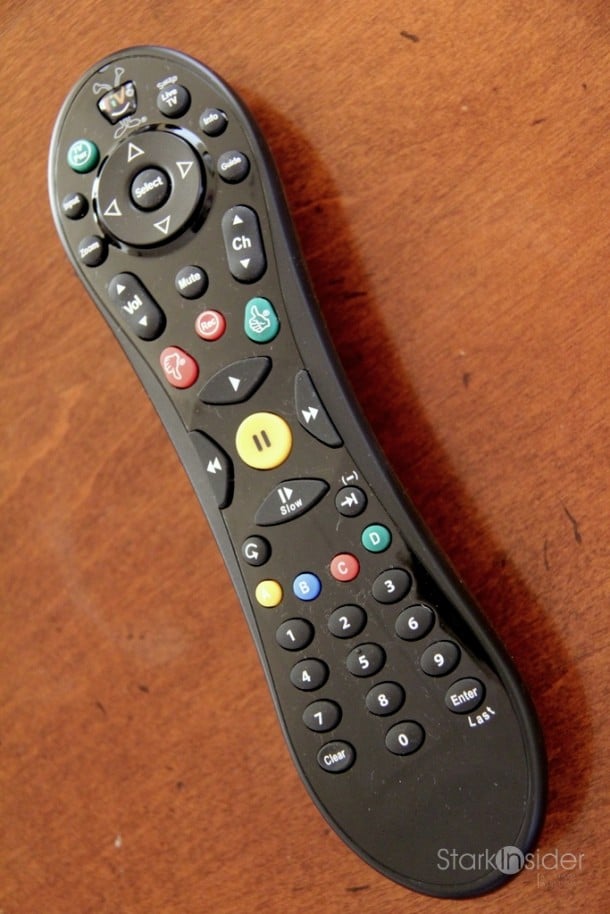 Scheduled programming and the traditional concept of broadcast television in general could soon be relics.

On-demand and streaming are the new rules. Storing content on a local hard drive is also becoming less common. The cloud is here, and it’s taking off.

Then there’s the slick, nextgen competition. Rack-and-stack Apple TV, Roku, or powerful (though similarly priced) video game consoles such as the PS3 or XBOX360 next to Tivo, and the latter’s age begins to show. At only $99, Apple TV costs 50% less than this entry TiVo model, and offers an exceptional array of content via iTunes. Roku too comes with a plethora of services out-of-the-box, and starts at only $49. Better yet, both of those options are easier and faster to setup, don’t have monthly fees, and require far less space under your television. For the power brokers, the PS3 and XBOX360 are unparalleled. These can be setup as full-blown media hubs, streaming content from a variety of services and also from local hard drives. And, of course, they have the added benefit of being able to run video games.

True, TiVo is a warlord — or “brainy behemoth” as used in the marketing materials — when it comes to tuners (the top end model has 4 which enables you to simultaneously record up to 4 shows, while still watching pre-recorded content) and if this is what you need, then those above-mentioned streamers won’t suffice. But the need to record content is being rapidly supplanted by on-demand. For example, you can watch every MLB game live or on-demand with Apple TV. Other leagues such as the NHL and NFL have similar offerings. Further the small screen has become the new big screen. Many are using tablets such as the iPad and Samsung’s Galaxy Tab and smartphones to watch content.

That leaves TiVo in a sticky situation.

If you must record live sports, and resolutely refuse to ditch your cable service, then it’s a solid – though premium priced – offering that will do exactly what you’d expect from a modern-day DVR. Don’t forget that you’ll need to pony up $14.99 per month (with a 1-year commitment)  or $499 one time for the TiVo service, on top of the charges for your existing service.

For most casual users, hard-drive free offerings such as Apple TV or Roku are likely better choices. You’ll get access to Netflix, Hulu Plus, Pandora, and iTunes (on Apple TV) and a bevy of other apps; not to mention you’ll spend far less time on set-up, and avoid incremental monthly fees.