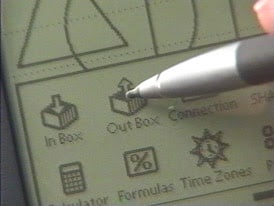 Samsung today announced it will once again unleash the stylii upon the masses. Later this month the company — who, despite Apple’s best efforts, is killing it financially – will start shipping the Galaxy Note 10.1.

At first blush the tablet looks just like the Tab 10.1 tablet.

Except for one thing: that stylus. That redundant, unnecessary, pesky little pencil-like twanger used to poke at a screen meant for… fingers!

I know what Samsung’s doing here, and who am I to second guess its incredible run building a handset business around Google’s Android. The 5-inch Note was a surprise hit. Consumers have purchased millions of the large screen “phablet” (with over 2 million selling in South Korea alone). The Note 2 will also land this month. If it worked before with the smaller screen, the thinking must go at corporate, then surely the same stylus trick will be welcomed on the larger 10-inch screen tablets.

The stylus needs to die.

In my estimation the original Note sold because of its nice, bright, large 5-inch screen. Not because of that mumbly jumbly nuisance of a nonsense known as the stylus. If you wanted something larger than a regular smartphone, but didn’t want to lug around an iPad, then the Note was goldilocks perfecto. That was the real reason it sold. Look around during your commute, on the train, the subway, that humvee in the lane next to you. How many people do you see using a stylus? (hint: this is rhetorical).

While I don’t agree there isn’t a market for a 7-inch tablet (Apple will build it as I’ve said before, and it will sell like hotcakes), I do agree with Steve Jobs when he said “they blew it” if you ever see a stylus on a mobile  device. After all, we have fingers; they make for perfectly designed pointers (thank Darwin). Better still, we usually don’t misplace fingers.

Now, granted, there are niche applications — medical, architecture, design — where a stylus does make sense. But that’s not what I’m referring to when I decry the death of the stylus. I’m talking about everyday consumers… the ones like you and I who are buying an iPhone or a Nexus 7 or an iPad.

Let me ask you this. Is this the first question you ask when shopping for a mobile device:

Does it have a stylus?!

My guess is no. You and I are asking:

– How big is the screen?

– Does it run my favorite apps?

But Samsung has misinterpreted the reason for the Note’s success, and as a result are unfortunately doubling down on the stylus — an idea that was cool in the 80s and 90s, but was supplanted by the wonders of touchscreens and gestures.